As somebody who has observed, measured, critiqued and discussed Ontario’s electricity sector for a dozen years I feel compelled to discuss a couple of harmfully poor articles that have recently appeared in Toronto’s sleaziest newspapers.

Retiring Ontario’s natural gas-fired power plants would be cheaper than official estimates released last fall, critics say, adding that they believe the government suppressed the publication of modelled scenarios that would have supported closing the carbon-intensive facilities.

That begins an article that appeared in The Globe and Mail last month, ascribed to a Matthew McClearn who the paper’s website comically describes as, “an investigative reporter and data journalist with The Globe and Mail's Energy, Natural Resources and Environment Team.” McClean’s article, “Documents raise questions about costs to retire Ontario’s natural gas power plants”, quotes a single critic from his “investigation”. That critic is Jack Gibbons.

I’ll admit that Jack Gibbons is a critic. As am I. I’ve also thought of him as a self-promoting snake, but realize now he’s more of a chameleon. In 1998 Gibbons’ “Ontario Clean Air Alliance” (OCAA) was promoting gas as a replacement for coal, as it continued to do even beyond 2009 when Gibbons was advocating for the Oakville (gas-fired) Generating Station - which turned out to be the last major gas-fueled new-build generator contracted in the province. Emissions today are far lower than under any of the scenarios the OCAA lobbied for during it’s first decade-and-a-half of existence and, simply put, when the OCAA called for a gas phase-out it called for something that began while they were advocating for new gas plants. In the past couple of years the aging OCAA members seem to have yearned for the years they received attention and collected ignorant municipal councillors to sign on to a campaign putting an end date on gas-fired generation.

... we recommend that the Government of Ontario take the following actions to achieve: i) a complete gas plant phaseout by 2030; and ii) an interim 2.5 million tonne per year cap on the gas plants’ GHG pollution as soon as possible. - OCAA Feb. 2021

The OCAA gas phase-out campaign steals from the strategies of the McGuinty Liberals in Ontario, who seized the coal phase-out issue as their own in the election of 2003 by promising to end coal 7 years earlier than the other parties planned - which they subsequently didn’t, but still credited for the policy. No new-build gas generator has been initiated with a contract since 2009 in Ontario. The long-term energy plan of 2013 invented a "planned flexibility" category, which had exactly the same attributes as simple cycle gas turbines specifically because it was non palpable by that time. In response to the OCAA campaign to be seen as against what they promoted for well over a decade the Minister of Energy issued a moratorium on procuring what hadn't been procured for the past dozen years.

Nonetheless, it is the OCAA's municipal “off gas” campaign that resulted in the IESO preparing its study:

This study, therefore, examines the question posed by more than 30 Ontario municipal councils in their resolutions calling for the complete phase out of natural gas generation in the province by 2030.

A brief article on “6 things to know” from the study included:

3. Phasing out gas completely by 2030 is not feasible and would mean blackouts …
4. Completely replacing gas-fired generation by 2030 would increase residential electricity bills by at least 60 per cent…

Hopefully I’ve now belaboured the point: the campaign was to COMPLETELY eliminate gas and the IESO’s task was preparing the response to doing that. I published a post which looked at the cost of stranding assets with a 2030 gas phase-out.
A summary of Gibbons' response to the report: the IESO only looked at a scenario where gas was eliminated. 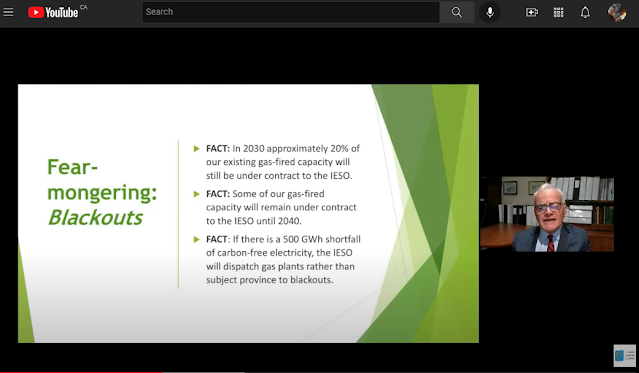 The Globe’s McClearn is convinced: “Earlier drafts of that report, obtained by the Ontario Clean Air Alliance under the province’s Freedom of Information and Protection of Privacy Act and supplied to The Globe and Mail, considered possibilities beyond a rapid phase-out.” The freedom of information document is very adult content as its 413 pages that whittle down information and focus in order to produce a digestible length final document in a limited time with limited resources. It is not titillating.

Of scenarios not dealing with the “complete” gas phase-out being omitted from a report on that specific thing McClearn chooses to quote Gibbons’, “They were just deleted…We believe there was political interference.” Perhaps he should have summarized Gibbons’s position that the IESO unfairly exaggerated the cost of a complete gas phase-out by 2030 because they included phasing out gas by 2030:
While the Globe article's content was simply shallow, its attempts to diminish the IESO could be more damaging. It is worth reminding Ontarians that prices spiked to the point of collapsing a government and costs being moved to the taxpayer specifically due to lobbyists displacing professional planning in the province when forcing the Green Energy Act, and its asinine procurement policies, upon Ontarians.
One last point before we move a circle inward in traveling from the Globe to The Star, to address the OCAA’s recommendation of a cap on emissions from natural gas power plants in Ontario. I wrote previously, “Each of the past 6 years the IESO’s system exported more electricity than it generated by burning natural gas.” We export electricity, often when natural gas is setting the price on the Ontario market where it is bought freely by exporters for consumption south of the border. Often the electricity exported from Ontario would have displaced coal-fired generation. Capping emissions here would impress readers of the Globe, but it would be a stupid thing to do.
This past week The Toronto Star had two reporters prepare one column (Marco Chown Oved and Jacob Lorinc). A cartoonish summary: When the wind is blowing we’re clean but nuclear is being reduced so emissions will go up cuz’ Ford.

Since all renewable energy projects were cancelled when Premier Doug Ford was elected, the province currently has no other way to compensate for the looming shutdown of a major nuclear reactor in Pickering…

There are 6 reactors at the Pickering Nuclear Generator station, note 1, and the contracts cancelled by Ford would have generated, annually, about 4% of what the reactors do. Not only were those contracts not the only way to compensate for the loss of Pickering, they weren't even a way to do that.
It’s complicated. Which is problematic for some.
The article, “Ontario energy grid emissions set to skyrocket 400%”, includes: “The projections show that the province’s natural gas plants — which only operate about 60 per cent of the time now — will run non-stop by 2033.” With emissions spiking 400% this might be interpreted as plants running 240% of the time by 2033. While an energy contortionist might explain away the Star’s claim there is more accurate wording to describe electricity: in 2021 Ontario’s gas generators operated at a capacity factor of 13% (10,700 MW of capacity produced 12.2 TWh) - which would make 2033’s Ontario’s plants have about the same utilization rate (capacity factor) as US plants have had for the past decade.
The Star chooses [checks notes] the OCAA’s Jack Gibbons to pronounce, “We’re going totally in the wrong direction.” It adds a second voice too, John Stephenson (retired engineer) who opines, “Any carbon in the electricity grid is a big drag on trying to reduce emissions elsewhere.” This is obviously not true - blue page territory for an engineer. A home running on a heat pump powered by a combined-cycle power plant can lower emissions, as can an electric vehicle instead of a gasoline powered one. It also completely misses the point of the system operator’s annual planning outlook.

Planning outlooks by public agencies, such as system operators or broader acronymed institutions such as the IEA and EIA, are to illustrate what existing trends will cause on the demand side and the impact of announced government policies. Changes in government policies such as increasing mandates for electric vehicles sales levels, transmission project direction/approval to feed supply to a growing greenhouse sector, and government agreements to subsidize the electrification of steel-making processes at the province’s two largest single-point emitters, Here is how the IESO’s annual outlooks changed over just 12 months. 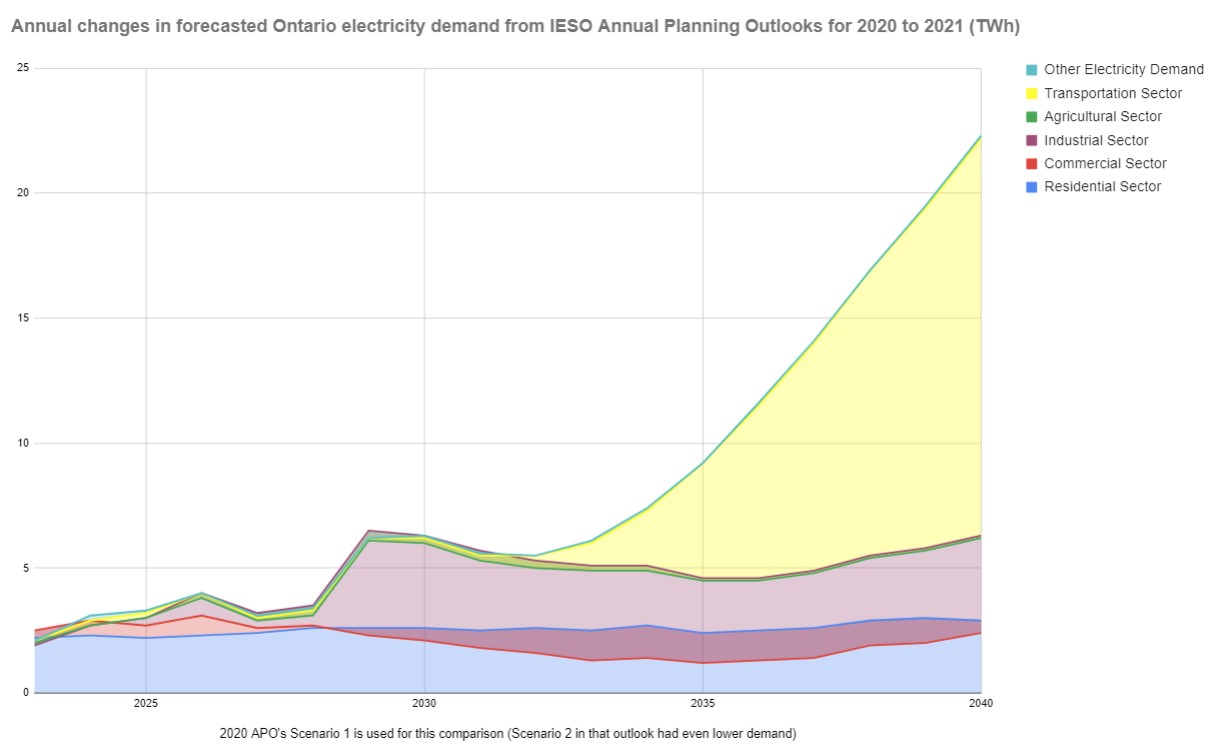 The big change is in electrification of transportation, and the ability to make those changes comes from flexibility in the electricity supply. The IESO's forecast did not choose gas out to 2042: it chose to continue capacity after contracts end in the absence of a commitment to other sources.

Returning to the piece in the Star:

because no new renewable generation contracts have been signed, emissions are projected to continue rising all the way up to 18.6 megatonnes, erasing more than half the reductions made since 2005.

Bury this kumquats: not only is this graphic in the 2021 APO, it’s in the IESO’s quick hit summary of that APO: 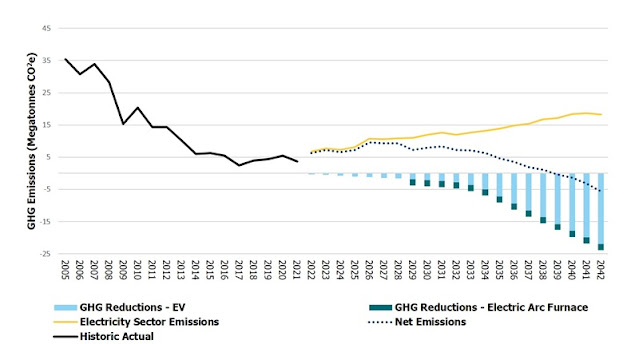 What is buried, by Marco Chown Oved and Jacob Lorinc and their editors and publisher, is the net decrease in provincial emissions due to greater electrification of the economy.

What is unsupported throughout the piece in The Star is the repeated claims that emissions would be lower if only more renewable electricity was contracted. Emissions have been lower than prior forecast specifically because less renewables than planned entered service and nuclear production remained higher than expected. I am unaware of any emissions forecast from those promoted wind and solar that lowered emissions to the levels realized in the past decade. The article invents a fable around 2017’s low emissions, but 2017 was anomalous: demand was low (due to mild winter months and cool summer ones), hydro output was high (due to precipitation that also caused significant spring flooding). Aside from 2017 annual emissions have been what they were forecast to be in the last months of the Wynne government. The big difference between now and 2017 is the number of nuclear reactors out of service: in 2017 only one unit was undergoing refurbishment and today there are 3. The article notes,“During [Ontario Premier] Ford’s first three years in office, [emissions] more than doubled to 5.4 megatonnes.” Gas-fired generation on the IESO-controlled grid did more than double from 2017 to 2021, increasing 6.3 TWh, which I’d attribute to refurbishments dropping nuclear output by 7.1 TWh. I’m not sure what those who keep lying about widely available super cheap imports from Quebec would attribute natural gas replacing nuclear to - but I don’t doubt a Toronto newspaper will write a story about it if they think something up.
Scott Luft at 3:25 PM
Share