In 2021 Ontario’s electricity market sold exported electricity for $1.25 billion dollars less than Ontarians paid to have it supplied. That amount is calculated with a methodology I described one year ago. 2021’s $1.25 billion loss is an improvement on 5 of the past 6 years, and $563 million better than we fared in 2020.

Others look at exports differently. Today we visit the murky world of the Ontario Energy Board (OEB) as it deals with a transmission charge for exports - which is where we find the IESO providing expert opinion.

A quick review of my work estimating losses on exports for those who haven’t memorized last year’s article: I copied (or attempted to) the methodology of the Office of the Auditor General in its 2015 annual report, which tallied up total system cost and usage to find an average cost of supply, takes revenues and volumes of exports, and does the math on how much lower the overall cost of exports was at the rate exporters paid than if they’d paid the average rate. 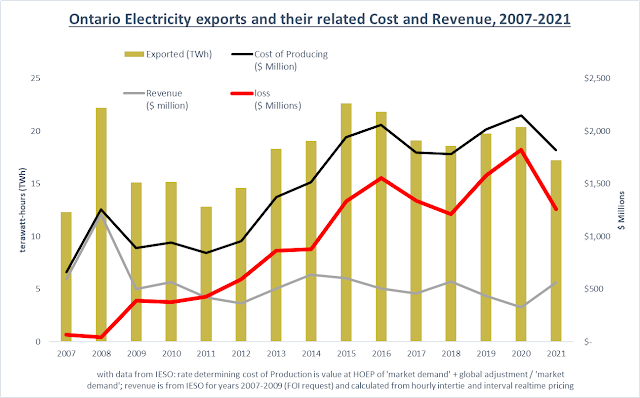 If I had to present a one-sentence hit on that I’d borrow from professionals on the wording and put in my calculated figures:

exports of electricity from Ontario have contributed between $1.2 and $1.8 billion of costs annually to Ontario’s Global Adjustment Charges between 2017 and 2020

Transmission rates are not something I discuss much - and the setting of transmission rates is not an art I appreciate. However, a discussion online led me to the table (1) below, which was provided by the Independent Electricity System Operator (IESO) as part of a joint submission made with Hydro One Networks Inc (HONI) to the Ontario Energy Board (OEB). As part of setting a broad transmission rate the OEB is faced with the question of how much, or if, exporters should contribute to paying for the transmission system. HONI doesn’t particularly care how much of their recovery comes from exporters: they take their expenditures to the OEB and the OEB reviews that spending and other things to develop, with HONI, a rate plan that provides transmitters with a rate of return deemed fair. The less revenue coming from exporters, the more will come from within Ontario - the split isn’t of concern to HONI. Apparently HONI’s main rate filing does suggest options for setting an Export Transmission Service Rate (ETS), but the OEB felt this aspect of the rate setting could use its own subsection and the IESO’s (electricity system operator) is important.

Here’s how the IESO described the annual impact of exports on ratepayers in the joint filing:

So $1.5 billion - $2.3 billion more positive than my reckoning (using an Auditor General’s format). They support that claim with this table.

In Ontario the annual cost of electricity supply alone, ignoring other costs which are largely transmission and distribution, is about $16 billion in recent years, so I don’t get very excited by annual totals such as the ETS’s $34-38 million (or the uplift charges of similar amounts).

Congestion rents I know about from developing routines which capture the intertie and real-time pricing data necessary to estimate them (although technically revenues from congestion rents don’t fall into the $16 billion calculation I note for supply). What caught my attention in this table was “Avoided System Costs”, which is the biggest share of the “Value” at 44%. The footnote for that line is: “Based on avoided nuclear and renewable resource curtailment, equal to 14TWh, 12TWh, 13TWh and 14TWh for 2017-20 respectively.” With that information from the authoritative source I sought to analyze exports and value them when due to excess supply - which strikes me as being ‘dumped.

I’ll come back to dumping, but first a brief summary of the history of the ETS charge on exports and the dual roles of HONI and the IESO in determining it. At market opening, “The OEB decided that, as an interim measure, the ETS rate should be fixed at 1.00/MWh.” They weren’t sure what it should be and Hydro One hired a consultant to work on that, By 2006 they’d decided to leave it at $1/MWh. The IESO hired a consultant for a report filed in 2009, and by 2010 it was decided another study was required - but the ETS rate was doubled to $2/MWh. The IESO contracted another study but in 2013 it was Hydro One the OEB was directing to propose a “cost-based ETS Rate.” Hydro One got a consultant and they proposed a rate of $1.70/MWh for 2015-16, and apparently all then compromised between the $2 in effect and proposed $1.70 and ever since the rate has been $1.85. The recent joint submission ends, in a section produced by the IESO, with, “Any increase in the ETS rate will reduce the value of interties, leading to less system flexibility to reliability manage the grid and higher costs for Ontario consumers.”

The first revenue item listed by the IESO is “Congestion Rents Collected from Exports.” I can approximate the annual totals for these back to 2005 due to statistics released by the IESO (2005-2015) on export revenues, core IESO hourly data for the Hourly Ontario Energy Price (HOEP) and exports dating back to that (and before), and IESO data I’ve collected for export by individual interties and the related real-time pricing for those interties from 2010 on. Congestion rents is the cost due to the real-time price at the intertie being driven higher than HOEP (as more exports are desired than the intertie’s capacity allows). These rents need not be realized as exporters can buy rights (a type of insurance), but the IESO’s reporting doesn’t indicate there’s a significant difference.[1] 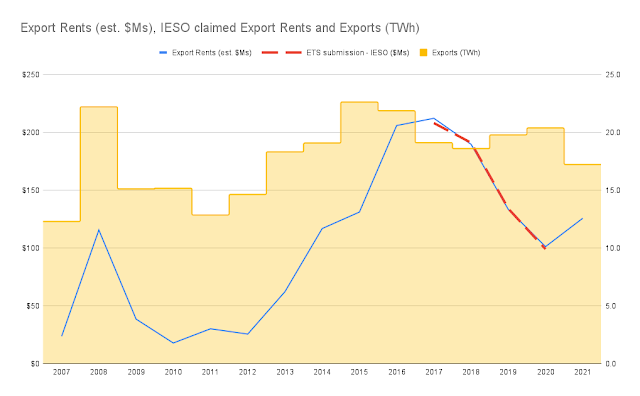 The surge in export rents from 2012 largely overlaps the surge in the losses on exports displayed in this article’s first graphic. That’s not surprising as, in general, the cheaper the price we sell at, the higher the demand from adjacent markets, and the more congestion on the intertie - at least theoretically.

The 700% rise in congestion rents from 2012 to 2016 wasn’t good news: export electricity was up nearly 50% in 2016 compared to 2012, with total revenue up only 38%. There’s a very strong hint there that export rents are symptomatic of bigger problems. Export rents are simply the real-time price (RTP) at the intertie less the Hourly Ontario Energy Price (HOEP). During the4 years export rents soared 700% the average RTP rate dropped: what had in fact happened over those years is the HOEP value had dropped (7%) as exports rose.

The information provided by the IESO, in the recent joint filing with HONI, piquing my interest was “Avoided System Costs.” Although the data, on revenues from exports of generation that would otherwise have been curtailed, is only provided for the 4 years from 2017-2020, not much imagination is required to see it could be extended back to 2012-2016.[2]

Adding the joint filing’s annual totals of avoided curtailment to the sources of the curtailment that did occur, I show during the four years wasted and excess supply equated to 15% of the supply Ontario demanded from the IESO-controlled grid. 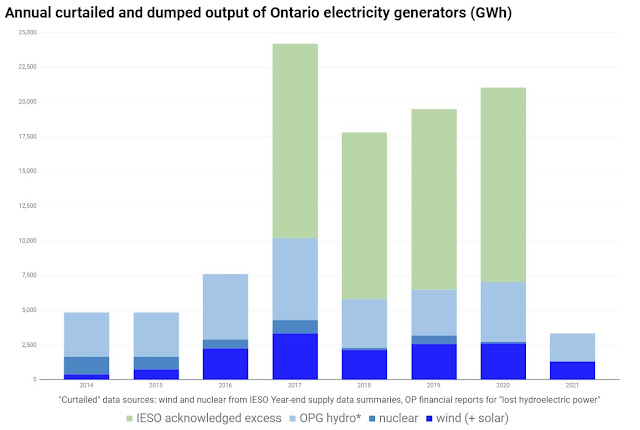 Seeing both a value and quantity for the exported electricity that avoided curtailment I calculated average rate received for those exports, and for the remaining exports (those not dumped instead of wasted altogether).

The numbers looked unbelievable to me, but upon further investigation they are simply not believable. Last year I published a post which included a “Scenario 2” data analysis for natural gas generation produced for export, and that scenario is similar to the remaining exports inferred from this new data (after subtracting from total exports the avoided curtailed in the IESO’s portion of the cited ETS submission). While I could go back to the scenario to determine a HOEP valuation it is complicated and relies on an assumption that all imports are Ontario supply (some may be wheeled through), and requires the few “must run” gas generators to be in the calculations. Here’s a simpler approach people might better understand: hourly generation totals by fuel are used to calculate the hourly trivial-emission supply (not a universally-agreed upon list but here meaning nuclear, hydro, wind, solar and biofuel), and where that total exceeds the hourly “Ontario Demand” on the IESO-controlled grid (ICG) the difference is excess and valued at the Hourly Ontario Energy Price (HOEP). That supply, at $6/MWh, is not valued about the same as other exports, but at less than one-third of the remaining exports’ average value over the 4 year period.

So what implications are there for the OEB’s hearing on the Export Transmission Service Rate (ETS)?

The main one is this submission from the IESO is wrong to claim as high a value on avoided curtailment as it does, and its valuation of congestion rents really should include an understanding it is the failure of its own market to recover more of the cost of supply that has driven congestion rents over the past decade. If they intend on over-procuring for another decade the analysis is fair, but they ought not do that.

In my opinion the OEB ought not change rates much, because they haven’t received a compelling reason to do so over the past 2 decades and new material being presented appears to me to be misinformation. I’d look for data explaining why 72% of the congestion rents from 2017-2020 came on the Michigan interties. I had a 2017 post on Michigan interties and my concern at the time was the frequent capacity curtailment due to equipment outages. In my opinion there needs to be a cost of service calculation and it should be based on keeping existing interties functioning well.