I was approached some time ago about supporting the refurbishment of the Pickering Nuclear Generating Station (PNGS). While I tried to be positive in offering to support proponents with data work, I didn’t add my name to the campaign primarily because, in addition to supporting nuclear, I try to support consumers. Things change, and the argument for a full refurbishment of reactors at PNGS has recently grown much stronger.

When I began this blog back in 2010 I pushed back against increasing electricity supply and the enormous costs unnecessary expansion was having on consumers, despite over half a century of declining growth rates in demand that had become no growth at all. In hindsight this was correct, and consumers benefited from the analysis. While Ontario has been awash in surplus supply for most of the ensuing 12 years, 2010’s desire to contract 10,700 MW of “clean, renewable energy from wind, solar and bioenergy” was never realized and today we have about 3,000 MW less than that under contract. For perspective, 3000 MW of wind at the prices the government in 2010 was contracting would have added about $25 billion in cost to Ontario’s consumers (over 20 years).

‘Renewables’ were not the only supply options being rolled back after 2010-2011. The “Oakville Generating Station” was contracted in 2009 (eventually built as the Napanee Generating Station), and that remains the last procurement initiating a major gas-fired generation station. Ontario Power Generation (OPG) not only abandoned plans for new nuclear builds but also for the refurbishment of the Pickering B, opting instead for life extension options on a far smaller scale.

I’ve long been unenthusiastic about all potential new generation which, in hindsight, was marked by high pricing due to unnecessary contracting, stagnant demand and excess generation. Including nuclear.

I shared my opinion on a supply mix for the province over 11 years ago:

The [Ontario Power Authority] is likely to determine that 8 Bruce units, and 4 Darlington units, will be able to supply 50%, of total electricity generation necessary to meet demand within Ontario… I would suggest the minister revise the wording of the directive to nuclear generation should be targeted to account to meet 50% of Ontario Demand. Looking back on statistics back to 1990, that is the level above which we become major exporters of electricity

During the next Ontario electricity planning cycle, in 2013, I developed planning tools to test different mixes under different assumptions on productivity and pricing. Again I found the most economic lower-emission scenario was the 10,000 megawatts (MW) of refurbished nuclear capacity (comprised of 8 Bruce units and 4 Darlington ones). In one scenario I’d run based on stagnant supply, adding another 2,000 MW of nuclear (roughly the combined capacity of the 4 Pickering B units) reduced gas use, and emissions, but about half the added nuclear would have been wasted, dumped or displacing other trivial emission supply.

A lot has changed for modeling since 2013: I would use much different pricing, I’d have to adjust my expectations of output from industrial wind turbines (they’re bigger and have higher capacity factors), sharply reduce solar pricing, review storage aspects, etc. But the biggest issue would be forecasting demand, and it is there that I’ve been convinced the tide is turning and the long period of stagnant electricity consumption in the province is ending.

I am still not as bullish on growth as many, but have to admit the demand scenarios from Ontario’s system operator (IESO) look somewhere between reasonable and cautious. Forecasts developed for their Annual Planning Outlook released in in December 2021 contain significantly more growth than their forecasts of a year earlier. Reasons for the increases include committed transit electrification (trains), steel mill conversions, and some fairly cautious electric vehicle outlooks. Not included in the reference scenario I’ll use for this post is a mass move to electrification of home heating, which is one reason I cite the outlook as cautious. On the other hand, there is a rebound effect that sees the usage for electricity rise as we reduce the need for it by increasing electricity (the extent of the effect is contentious), and I suspect people will find efficiencies in other areas in response to increases in consumption as they move transportation, heating and some other household tasks (such as lawncare) to electricity. I use the reference scenario, and not the high demand one, as caution is warranted. Ignorance is not.

Ontario Power Generation (OPG) not only abandoned plans for new traditional large nuclear builds a dozen years ago, but also for the refurbishment of the PNGS. At the same time the public generator announced that they would proceed with the refurbishment of their newer Darlington Nuclear Power Station, they settled on a less ambitious scope of work at Pickering:

OPG has decided to pursue the continued operation work program on Pickering B rather than refurbish Pickering B. The major factors in this decision were:

Looking back there was a lot to like in the decision. The most optimistic ‘economic’ case wouldn’t have been realized as natural gas prices remained low for over a decade, and the sector has thus far escaped carbon pricing. Today things are much changed. Gas pricing has roared internationally and, even if fuel costs drop back down, Canada’s government has targeted a price of $170 per ton of CO2 equivalent ($/t CO2e) by 2030. Resources were found to manage multiple refurbishments as OPG itself will have, for a brief period, 3 of its 4 reactors at Darlington simultaneously undergoing refurbishment. Other changes over the past decade pointing to revising the decision not to refurbish Pickering’s B units is the successful, timely and on budget, Darlngton 2 reactor refurbishment by OPG and the solid post-refurbishment performance of the #1 and #2 units at Bruce A -both those units being older than any reactor at Pickering’s B station.

The increases in demand can provide guidance to structuring the future supply mix within the context of a mathematical definition I’ve suggested for a definition of desirable baseload supply:

Desired baseload supply is modeled to equal the mean hourly demand less one standard deviation. The statistical theory is simply that electricity demand over the course of one year constitutes a standard distribution and in such a distribution over 80% of demand falls below the level of the mean less one standard deviation. This model performs well in backtesting with the IESO’s hourly “Ontario Demand”, using actual nuclear generating capacity along with an estimate of 3,000 megawatts of hydroelectric capacity as baseload to compare to the model’s μ - σ.[1] The test of a model is not whether or not it’s “correct”, but whether it’s useful. We have no generators that are 100% available throughout each and every year, and hydro potential in Ontario varies with the seasons, and the precipitation from year to year. However nuclear outages can be scheduled to the shoulder seasons, and particularly the spring freshet when hydro capacity surges, so my use of these figures as baseload is not without merit. 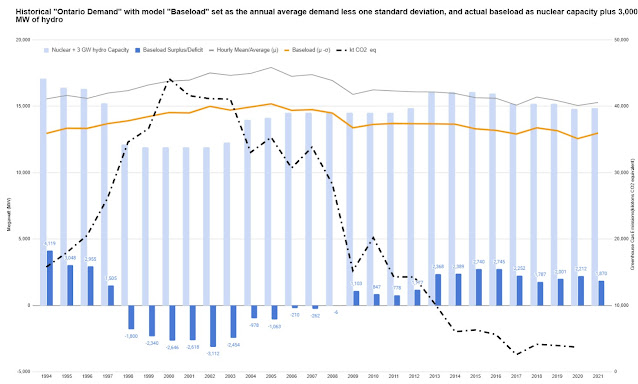 The model is useful in illustrating a narrative on the history of Ontario’s electricity sector, and its emissions, from 1994 through 2020:

There were, obviously, other events in Ontario’s electricity supply over the period impacting emissions results. Coal, which had surged as baseload capacity fell in the 1990’s, was vilified (mostly for its negative impacts on air quality and thus health) and then eliminated, gas capacity was constructed (under “Clean Energy Supply” contracts), and wind and solar both grew in the province. The model is meaningful enough that the impacts of those events don’t negate the illustration of the relationship between trivial emission baseload supply and lower emissions from the generation of electricity.

Looking to the future, the IESO’s 2021 Annual Planning Outlook (APO) provides some useful forecasting, including data tables developed in generating the report. The 2021 APO is more bullish on future growth and provides support for being so with significant growth forecast in steel production due to electric arc furnaces displacing fuel use (at the provinces largest single point emitters), electrification of transport (in both transit with the electrification of rail and in personal transportation with electric vehicles), and in agriculture due to transmission projects enabling growth in the blossoming greenhouse industry.

Applying the model we tested with actual historical data shows a deficit in baseload supply growing beyond 3,000 MW by the planned retirement of the Pickering Nuclear Generating Station (PNGS) in 2026, and escalating annually after 2033.[3] 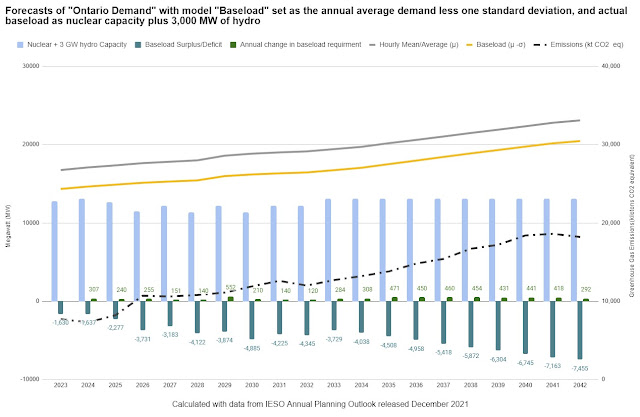 On a positive note, provincial emissions would be lowered under the APO’s growth scenario, as electrification in transport and industry displaces more emissions than electricity will produce - yet there’s an element of repeating a past mistake in reducing baseload capacity: while natural gas is a less damaging fuel than coal, and wind and solar can displace some fuel in allowing gas plants to be less productive, emissions growth still comes from the reduction in the share of electricity being supplied from a baseload supply in accordance with the μ -σ model.

With the retirement of PNGS Ontario’s electricity sector emissions are forecast to double: in the ensuing 15 years the forecasts is they’ll double again. None of the reasons provided for not choosing refurbishment a dozen years ago remain valid, and there is little doubt the output of a renewed PNGS would be utilized. The development of a 300 MW small modular reactor, as the current PNGS owner/operator (Ontario Power Generation) proposes, is as necessary with PNGS as it is without PNGS as by the first half of the next decade 1-2 SMR will be required to enter service each year if Ontario is to maintain its hard-earned reputation for low emissions intensity electricity generation.

Other proposals abound for limiting emissions from the electricity sector, but none have a history of comparatively very low emission sectors as those comprised largely of either reservoir hydroelectric, nuclear, or both. In the 12 years since I wrote the first article linked to in this article that has not changed. This does not mean it never will, but it does mean it is gambling on higher emissions to change from our recent history of a system characterized by a large baseload supply.

[1] There are two similar datasets used for hourly demand, both at one time posted by the IESO. Data from May 2002 thru 2021 is defined as “Ontario Demand”, whereas prior data was posted as “metered” demand. There is a distinction, but I’ll treat it as trivial to this exercise. There is a data gap of December 2001, for which no data exists (as far as I know).

[2] I was informed that in 1990's "Surplus Baseload Generation“ was an issue, although it was then referred to as "Unutilized Baseload Generation” - likely as most of the curtailment would have been at the public generator (OPG).

[3]  “Demand” in the Annual Planning Outlook is not strictly comparable to “Ontario Demand” in actual IESO reporting. The APO forecast is not adjusted downwards due to “embedded” generation - as actual demand for supply from the IESO is. In recent years embedded generation has been approximately 7 TWh annually.