Ontario’s system operator (IESO) was tardy in publishing its “year in review” summary - and I was content to delay mine until their’s appeared. Before diving into the analysis I want to note the some challenges facing the sector as they’ve emerged in my media world:
An annual analysis provides metrics that have utility, but it should be kept in mind this summary level of analysis has limitations. I’ll summarize annual statistics for not only 2021 but also for the years from 2014-2020 to give a perspective on where we were as well as where we are.

If you follow me on Twitter you may have seen the first numbers in the IESO’s summary, albeit in different units, days before the IESO posted them. Whereas the IESO posts these separately I’ll show the past 8 years here:

If you follow my reporting more closely you may have realized these don’t exactly match the numbers displayed in my Power BI reporting (which, when all is well, updates daily). The differences are not without meaning. The IESO’s annual data matches an annual summary of data from its Generator Output by Fuel Monthly reporting, whereas my basic report using Power BI takes its data from the IESO’s Generator Output by Fuel Hourly reporting. This means the IESO’s monthly reporting isn’t summarized from its hourly reporting. My assumption is one is dispatched/scheduled in the system and the other based on metered production .As nuclear and hydro annually produce more than the hourly figures show it seems those generators often produce more that scheduled, while gas output is consistently 3-4% below what the hourly figures indicate - quite possibly as they’re adjusting for the variations in supply (including from nuclear and hydro) as well as demand. The surprises to me are in the small generators: solar is still producing about 7% more than dispatch, and most years biofuel is also off.

There remains scarce hourly production data for solar generation in Ontario. The facilities on the IESO-controlled grid (ICG) have reporting in an hourly output and capability report - and that report does summarize to the hourly by fuel report. Those solar facilities only comprise 16% of the contracted solar capacity in Ontario that has entered commercial operation. That is the only hourly production data those modeling different electricity supply mixes have to work with, and the annual IESO year-end summary tells us it isn’t of great quality. There is an additional issue with using the actual production data as the panel capacity of sites is hidden - we know at least a couple of the sites are 40-45% overbuilt with panel (DC) for the grid connection (AC).

The IESO offers very little reporting on generation embedded in the networks of the province’s Local Distribution Companies (LDCs). The IESO’s year-end summary for 2021 does provide figures, by fuel type, for “Grid-connected capacity”, but omits the distribution generation contracted by the very same IESO.

The 13,089 megawatts (MW) the IESO reports as nuclear capacity was not actual available capacity during 2021, and hasn’t been since the fall of 2016 when “breaker off” occurred and the refurbishment of Darlington unit 2 began. Before that unit returned in May 2020 Bruce Unit 6 entered refurbishment, and it was joined late in July 2020 by Darlington’s Unit 3. In 2021 nuclear capacity was therefore less than 11,400 MW, and when Darlington 1 enters its refurbishment in the near future Ontario will drop to approximately 10,500 MW of functional nuclear capacity. It is not planned to rise above that level again.

My perspective on the loss of Pickering is that it creates a short-term capacity gap: by 2033 we’ll return to the nuclear capacity level we will have this summer. In 2021 we were already viewing what the loss of a majority of Pickering’s production would look like all other things being the same, but the IESO is not forecasting all other things to be the same. Their outlooks now forecast demand to increase.

The IESO reported Ontario Demand of 133.84 TWh but this too is not meaningful without context: their “Ontario Demand” is demand for supply from the IESO-controlled grid. The more generation that is embedded in distribution networks, and the more electricity that is self-generated behind-the-meter/fence, the lower “Ontario Demand.” One way to see that the decline in Ontario Demand exaggerates the decline in the use of electricity in the province is to use the “Consumption” figures reported with Global Adjustment reporting. Through trial and error I came to assume 2.1% of generation does not get to be charged as consumption (assume mostly transmission line losses although a small part is generator consumption). 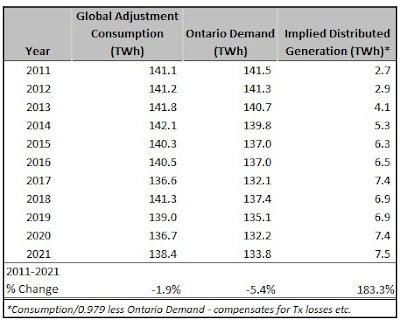 To put a 2% decline in consumption over a decade in a historical perspective, my first post on this blog (in 2010) quoted the declining growth of past decades: 87% during the 1960’s, 53% for the 1970’s, 34% in the1980’s, 7% in the 1990’s and a drop of 7% during the 2000’s, so the trend of declining growth has de-escalated. A little. Ambitions for growth are again being spoken out loud, and while there’s not as much reason to scorn the idea as there’s been, there remains reason for skepticism.

There is a third type of supply that costs Ontario’s electricity ratepayers beyond that reported on by the IESO (Tx) and distributed (Dx), and that is contracted supply that is curtailed rather than accepted onto the grid. The IESO’s annual year-end-data review is the only time I see numbers on their curtailment published. In 2021, “A total of 1,289 GWh of variable generation was curtailed,”as was 22 GWh of potential nuclear generation. In addition to the IESO specifically curtailing supply, the public generator (OPG) reports on, “Production forgone at OPG’s regulated hydroelectric stations due to [Surplus Baseload Generation] conditions.” Through September 2021 1.7 TWh of potential waterpower generation had been spilled, and I anticipate that the full-year total will be near 2 TWh. Curtailed supply in 2021 will be approximately 3.3 TWh, which is less than half of 2020’s 7 TWh and the lowest level since reporting became available in 2014.

For a picture of all the supply involved in the charges the IESO reports the curtailed and embedded supply need to be added to the generation on the IESO-controlled grid provided by the IESO. 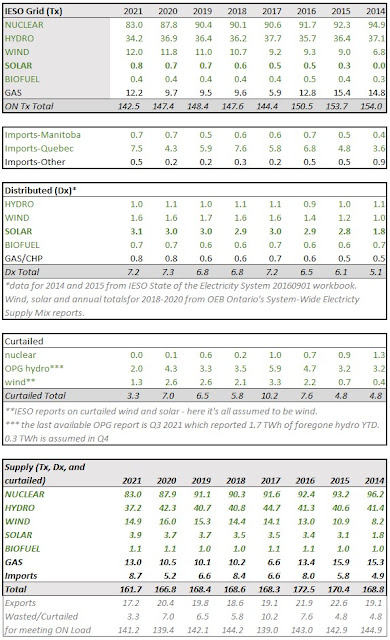 There’s a lot in here but I want to point out just a few things before moving onto cost:
I don’t wish to dwell on production figures but do want to emphasize the utility of having the tables shown above as a reference. I was shown a document published in 2022 that highlight the claim: “Ontario municipalities have asked the Government of Ontario to: 1. Return the gas plants’ GHG pollution to their 2017 level ASAP…” The same document repeatedly reference 2017 as a baseline - but 2017 is an outlier. Demand was low (if I recall correctly due to a mild winter and cool summer), water levels were very high, and nuclear capacity higher than it is now (and higher than it is planned to be).

The final element of the IESO’s 2021 Year-end data summary I want to discuss is their treatment of pricing, which simply provides the average Hourly Ontario Energy Price (HOEP), weighted to Ontario Demand, and the Class B Global Adjustment. I find that problematic as the introduction of a “Non-Hydro Renewables Funding” mechanism moved much of the cost of wind and solar contracting off of electricity ratepayers and onto taxpayers. I think that makes sense (as much of that contracting was for political purposes beyond providing electricity), but some effort can be made to provide continuity in data so that costs can be compared between years. 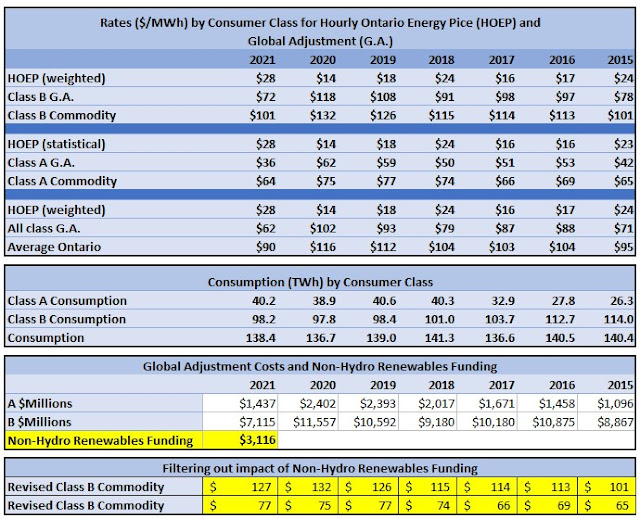 Aside from comparing between years the IESO also omits reporting Class A costs in its year-end review, so I’ve included that. I will not revisit discussion of cost shifting but simply state the Class B rates reported by the IESO are impacted by rates paid by exporters (for supply cost purposes only the HOEP) and Class A consumers (who can avoid global adjustment charges which shifts those costs to Class B consumers). Less costs were shifted in 2021 as the HOEP was higher (indicating both a reduction in surplus supply and higher natural gas costs). It is notable that without the movement of some costs to taxpayers the average Class B rate would have been lower (by $5/MWh) while the average Class A cost would have been $2/MWh higher.


My favourite statistical quirk in the previous table is in the Class A and B commodity pricing of 2015 and 2021. With the benefit of the Non-Hdyro Renewables Funding both classes paid the same nominal rates in 2021 as 6 years earlier, but the average rate paid by the two classes dropped $5/MWh. This is explained by the movement of consumers from the higher rate Class B category to the lower cost class A. Over the period lower requirement to participate as class A consumers grew that class 53% as it went from 19% of provincial consumption to 29%.
When I began the post I noted some electricity sector issues today. There is, in my opinion, a popular double-standard that allows “green” people, as identified by each other, to use this annual level of data to make claims that only detailed hourly (at a minimum) analysis could support. The City of Calgary’s green politicians and politicians-disguised-as-academics can claim a train runs on wind because the city annually pays for as many megawatt-hours from wind as the train uses on an annual basis: Ontario has paid for, each year from 2014-2017, more ‘trivial’ emission supply than it has consumed, but few consider the province to be “net zero” like Calgary’s Ctrain. Annually electricity exports out of Ontario into the United States have exceeded the generation with natural gas in our province - and that gas generation must have displaced supply from much higher emission coal in Michigan and the states adjacent to it. That is not considered net zero either. Quebec and Ontario have long had a healthy relationship but it's not one that can be demonstrated by annual summary figures. Most sane people realize wind and solar can’t alone power a cold northern province, but few are willing to dive into complex hourly data to figure out what might without causing massive expenditures on unneeded production - or worse, curtailed production. If I tricked some into reading this summary with a promise of answering big questions I will have succeeded in leading some to a reference they can use to dismiss some popular, but factually baseless, claims.
spreadsheet