The growing subsidy of wind and solar in Ontario

I was recently asked the amount of subsidies paid to wind and solar generators in Ontario, and felt answering deserved a blog post. I will show that from the introduction to Ontario's transmission grid of the first industrial wind turbines in 2006 up to June 30, 2016, subsidies to wind and solar generators have been approximately $6.4 billion.
More important than the figure, are the trends in annual magnitude and composition.

I have tried not to use the word "subsidy" in recent years - having been guilty of using poorly in the past. However, it's increasingly clear to me that avoiding the "subsidy" discussion has been harmful to Ontario's ratepayers.

In Ontario the word "subsidy" is often quantified by the amount paid for electricity by consumers above the price of that electricity in Ontario's market. The method of recovering that amount is the global adjustment mechanism. The complicated system with huge figures (on track to hit $12 billion in 2016) meant great attention was paid when the Auditor General of Ontario reported, "[from] 2006 to 2014, electricity consumers have already paid a total of $37 billion, and they are expected to pay another $133 billion in Global Adjustment fees from 2015 to 2032." 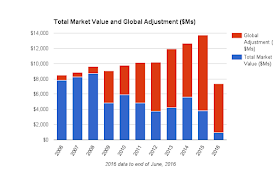 It is clear wind and solar were procured in a manner that paid a price premium for them, and I will call that premium a subsidy. The difficulty is in quantifying the subsidy.

I will quantify the subsidy as the cost paid above the actual cost paid for other supply. This is both fair, and difficult. Fair because wind and solar haven't replaced any capacity, only production and that from either hydro and nuclear (at insignificant fuels savings) or natural gas (which has been cheap); difficult because much of the data required to estimate costs is either not available, or complex.

Fortunately the trends are so striking generalities will suffice to demonstrate the trends.


The Average Cost of Electricity

Calculating the average cost of the average megawatt-hour of electricity, in Ontario's electricity system, can be done by:
Estimating both the numerator and denominator have many challenges. I won't elaborate on each step of the estimates, but simply provide the overview in reducing the average rate for electricity most Ontario ratepayers would be familiar with to the average paid to a supplier for one megawatt-hour (MWh) of generation. The average residential, or small business, ratepayer is charged on a regulated price plan that itself is set by a prediction of, essentially, a "Class B" consumers costs. This cost is higher than the average for Ontario, and for the entire market (including exports), and includes payments for deemed generation. It's useful to calculate a series of rates to indicate how end cost reduces to costs paid to a generator:
Using 2015 as an example, The "Class B" commodity rate of $101/MWh was $7 higher than if "Class A" consumers weren't a separate class, and $17 higher than if all consumers, including exporters, paid the same rate - that same rate, $84/MWh, was $2/MWh due to the paying for ~4,833 GWh of curtailed supply. Removing the estimated costs of all wind and solar generation, as well as the generation, reduces the average paid to all other generators to $71/MW 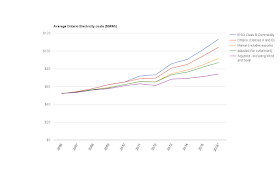 h. In quantifying a subsidy I am using the $71/MWh (for 2015) as the base, or unsubsidized, rate; using the global adjustment as a subsidy would essentially use $23.6/MWh, the weighted average Hourly Ontario Energy Price (HOEP), as the unsubsidized rate.

The electricity system operator (IESO) provides regular reporting on transmission connected (Tx) generators, occasional reporting on a small subset of curtailed generation, and essentially no reporting on embedded generation. One exception to this exists in a report from the Auditor General of Ontario (Figure 5) which shows generation totals, and costs, provided by the IESO, for 2014.

I've written on better reporting on generation utilizing the Ontario Energy Board's reporting of annual Supply, using only the IESO's reporting on nuclear generation to translate percentages to generation totals. The numbers from my estimates, below, do not exactly match estimates using the OEB data (including 2015's), or the Auditor's table for 2014, but the variances are small. 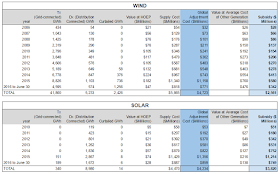 These figures indicate that since the first turbines appeared in 2006, Ontario has spent over $10 billion on the output - of which almost $9 billion was paid not by market transactions but through the global adjustment.

Calculating as a subsidy the amount paid to wind and solar generators due to contracting their generation above the average cost of all other generators, the total subsidy is approaching $6.4 billion. Due to the poverty of information released by the system operator on distribution-connected generators, many Ontarian's will be surprised to see solar subsidies now far exceed subsidies for industrial wind turbines - both annually, and cumulatively. 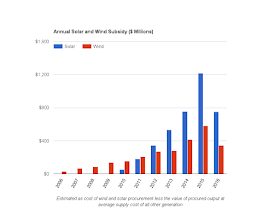 Given the focus on wind turbines as driving costs, the inability to producing coherent reporting on solar output should not longer be overlooked.
This is not transparency.
It is incompetence.

I've presented an argument that the subsidy of wind and solar has been over $6 billion - and looks likely to exceed $2 billion in 2016 alone.


One criticism I anticipate may be made of my methodology is that the cost of new generation should be compared only to the cost of other new generation - with the assumption all new generation will be more expensive. While there's some truth to that argument, wind and solar haven't been procured instead of other generation, but in addition to the requisite firm capacity traditional generators provide.
There's a better argument that these "displacement" sources should be valued only at the cost of the natural gas fuel use they displace.

In Ontario, displacement is little. Curtailment has been high, particularly of public hydro-electric generators, and exports have soared.

It's important to note I am using the term "subsidy" in terms of what is paid to wind and solar generators above the average paid to all other generators - this is only a portion of the cost that has been added to Ontario consumers. While the average commodity cost of other electricity supply increased by ~42% since 2015: 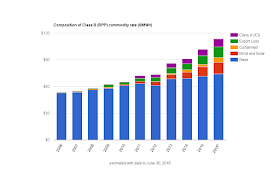 The average Ontario ratepayer has seen costs escalate due to the contracting of wind and solar plus the reaction of export markets to the subsequent excess supply, plus the defense of industrial pricing from the rising cost pressures.

Harm to ratepayers grew over the past year as a court decision sentenced Ontario ratepayers to half a billion dollars in additional charges based, I've argued, on the government's inability to explain - and perhaps comprehend - what comprises electricity costs in the province. The presentation of the global adjustment as reflective of purchasing costs of electricity supply harmed the ratepayer in that case - another indicator the global adjustment is a bad baseline for measuring anything, except maybe the shifting of costs from industry and exporters to residential, and small business, consumers.