Ontario's Environmental Commissioner produced yet another report and newspapers reported on it.
I won't waste any more of my life reading clerical bureaucratic irrelevance produced by the innumerate Mr. Miller (I've suffered through 2 in the past), but seeing reference to costs, and savings, from demand reduction programs, I did quickly flip through the 2011 Conservation report from the Ontario Power Authority (OPA released in December 2012) - enough to get the impression that the claims are that from 2006-2011 $2billion in spending on conservation and demand management (CDM), with a cost in 2011 of about $30/MWh, has resulted in $4 billion in savings for customers.

I don't want to repeat an eroneous implication I made two years ago that the OPA just makes these things up (I'm OK providing the link), but I do want to state most of the claims are probably nonsense.

If you pay $30 to reduce a MWh of consumption, and the consumer generally pays over $60/MWh, the savings is not $30.
Most supply in Ontario is either publicly owned with the capital costs already incurred and the operation costs set regardless of production, contracted on a 'must take' basis, or subject to "net revenue requirement" guarantees that essentially guarantee recovery of capital costs regardless of production.  The separaton of capital and non-fuel operating costs from the market price means that reducing the total MWh consumed primarily increases the price of the remaining consumption, with very little overall savings to the consumer.

The awkward reality is that we are almost always net exporters, and those net exports usually yield a little over $20/MWh.  Ontarians should be viewed as spending ~$450 million, in 2012 alone, to subsidize exports (see note 1 from my initial review of 2012 stats) - which has an impact on most of our bills of approximately $5.25/MWh.  Funding the OPA's programming, primarily CDM activities, adds another ~$2/MWh.  Combining the costs of dumping exports with the cost of curtailing domestic consumption, the impact on the bill is now probably greater than the debt retirement charge.

And that is before accounting for the production we curtail. 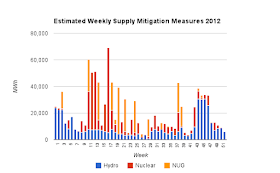 Curtailment is difficult to quantify, or judge.  The programming I've done to estimate when non-utility generators are taken offline for a low-demand weekend; when Bruce's nuclear units reduce output via condenser steam discharge procedures for a couple of hours; and when hydro turbine output is diverted overnight to feed directly into Quebec's grid, totals ~843GWh, which is again greater than the OPA's claimed 717 GWh reduction (for 2011).  The hydro redirection may not be as damaging as it appears, as there may be returned benefits from Quebec; however, neither the amount of production redirected nor the agreements under which it is done are known.

The Independent Electricity System Operator (IESO) often writes about the issue of Surplus Baseload Generation, but does not provide firm numbers on curtailment.  A Recent submission by the IESO to the North American Electric Reliability Corporation (NERC):


With the forecast increase in SBG, an increase in out‐of‐market control actions is foreseen such as minimum hydro dispatch and nuclear maneuvers, to be required in order to manage the surplus, extending beyond the typical market actions which include exports. With wind and solar becoming more prominent resources on the electricity system, the need for maximum flexibility from all resources has become integral for the reliable and efficient operation of the grid.

Translated, that says with the additional generation we are contracting we will more frequently curtail other no/low carbon sources.
We are still contracting more supply while curtailing existing contracted generators and spending heavily on demand management.

Searching for evidence on the impacts of "minimum hydro dispatch" lead me to Statistics Canada CANSIM database treasure.  While there I also picked up enough information to estimate Ontario's domestic consumption back to 1977.

One year ago, in reviewing the electricity statistics for 2011, I was somewhat surprised to find evidence that total generation from all renewable sources had been low by the historical standards of the past two decades.  This year my initial review again showed hydro production dropping - by approximately the increase in wind and solar production (~900GWh).  The data indicates 2012's hydro production is the second lowest annual output in 35 years - the past 3 years ignobly occupying 3 of the 4 lowest positions.

Production from renewable resources is essentially unchanged in 2012, while apparently more demand is eliminated by demand reduction programs as more electricity is exported at lesser rates.

Ignoring the current reality, Ontario not only continues to commit to more generation, we evict rare eagles and sacrifice important bird areas to attain more and more.

If only there were an Environmental Commissioner to stick up for the natural environment against actions that threaten it.