Dispatchable coal and natural gas units were also generating on the 4th, and all but 5 hours net exports also exceeded the amount of dispatchable generation - so the export story is certainly not exclusively about wind turbines. 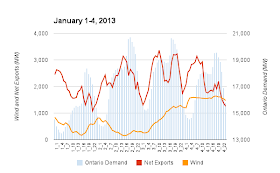 The exports (net) during wind's record day were lower than they had been the previous 2 days.

The reason the dispatchable coal and natural gas-fired generators need to be available may be explained by wind production 47 hours prior to the record set on the 4th; when Ontario demand was higher than it had been for 118 days, the grid-connected wind resources were producing only 234 MW.  As it was dark at the time, and assuming the non-grid wind turbines were producing at the same efficiency as the turbines on the grid, Ontario's 2500+MW of renewable energy was outputting only about 10% of capacity at peak.

That explains why the dispatchable generators need to be available.

This generation frequently operates for export customers because Ontarians pay the full operating and capital costs through the global adjustment mechanism.  This explains why the net exports are frequently higher during the higher demand periods of the day than the low demand of early hours.

That does not explain why net exports could be lowered by high winds.

Perhaps the markets we export to also have more supply than anticipated when the wind resource is plentiful - and perhaps that will increasingly be the case.