The Ontario government has finally announced the closure of the remaining coal-fired units at Lambton and Nanticoke.  For some time the message has been that the government was on track to meet it's revised goal of 2014 (initially 2007 - then 2009), and yet there are no generation projects planned that make the ability to turn off the plants any greater in 2014 than they have been since September of 2012.


Premier Dalton McGuinty was in Newmarket today to announce the Lambton and Nanticoke coal plants will stop burning coal by the end of 2013. The early closure is a result of Ontario's strong conservation efforts, a smarter electricity grid and a diverse supply of cleaner energy. Shutting down the last coal plants in Southern Ontario will significantly reduce greenhouse gas emissions and save the province $95 million.

I think the move will save money, and I'll not question $95 million.
The reducing greenhouse gas emissions I will question.

Background on why the coal-fired generators weren't already retired

In 2006 the promise to phase-out coal by 2009 was abandoned/delayed.  Activists claimed the delay was due to lobbying by the Association of Major Power Consumers in Ontario (AMPCO) and the IESO's Ontario Reliability Outlook of June 2006 which included a "Coal Replacement Policy."  The document argued Lambton was required to stay online later due to delays in "project and site approvals" for replacement facilities.  The arguments for Nanticoke were more complex:


Studies underway on the shutdown of the Nanticoke units indicate that significant delays will also be required. In addition to being subject to the impacts of in-service delays for replacement generation and changes in planning assumptions discussed above, the Nanticoke station provides voltage support necessary for power flows to the GTA. Not only is replacement generation required on-line, but substantial transmission changes are also required to facilitate the shut-down of Nanticoke.
The IESO is continuing to assess the need and timing for some Nanticoke units to be converted to operate as synchronous condensers, which provide reactive power without burning coal to operate.

The engineering I can't address beyond noting there were unique attributes at Nanticoke, and serious claims it has better peaking depth and is therefore a better companion on a grid with fluctuating generating sources (renewables).

I will address the numbers from the non-engineering perspective from which I can assume we could produce exactly the amount of electricity demand requires (all outputs above Ontario's demand level thus being treated as superfluous).

Usually, Ontario is a net exporter of more electricity than it's coal-fired generators are producing.  In 2012, there were 1976 hours where coal production exceeded net exports (roughly 20% of all hours, down from ~24% in 2011).  However, the hours are heavily skewed to the peak demand summer season.  In July 2012 coal-fired generation exceeded exports 51% of the time (down from  ~76% in July 2011) 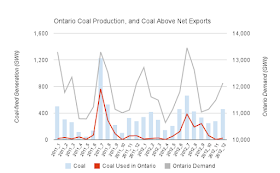 If we did need coal, the chance is we would need it in the summer.  Based on summer 2012, we didn't appear to need coal based on a simple test of whether enough capacity existed to replace the peak coal production.  Coal output maxed out at 2377MW on July 23rd, when natural gas-fired generators likely had another 600+ MW potentially 2000+ MW remained available at OPG's Lennox plant (oil/gas - likely dirtier than Lennox not counting CO2).

In 2011, coal maxed out at 3585MWh - not having coal would have made supply very, very tight.  Notably that was at 9 pm on July 17, 2011, when solar would not be productive and 1500MW of wind capacity produced only 70MWh.  It's important to note that to emphasize there will be no apparent supply changes capable of replacing coal's peak matching ability between now and the end of 2013.

It's notable that the majority of coal generation in 2012 came from the units at Lambton; units equipped with both scrubbers for SOx reduction and Selective Catalytic Reduction (SCR) systems for nitrogen oxides (NOx) reduction.  The Lambton generating station in located on the St. Clair river - within kilometers across the river lie 2 of Michigan's generators, including the St. Clair Power Plant located almost directly across the river.  Considering much of the production from Lambton could be considered as being exported to Michigan, the results of closing Lambton have a couple of possible outcomes for air quality:
Ontario's coal use is a pittance on a global scale.  The majority of coal generation in Ontario in 2012 was either serving purposes to maintain the integrity of our electricity system, or replacing generation, probably coal-fired generation, in Michigan, New York, and other states.

The environmental value of phasing out coal would come primarily in setting an example that it could be done economically.


I pulled some data on annual additions/subtraction to Ontario's generating capacity, and updated 2013 for the coal phase-out.  Since 2002 Ontario Added ~5600MW of natural gas-fired capacity and ~4080MW of nuclear (refurbished - this treats Pickering A as 0MWe in 2002, with units 1 and 4 only in this accounting as refurbishments completed).
Demand is approximately 11TWh less than it was in 2002, or an average of ~1250MW each hour of the year. 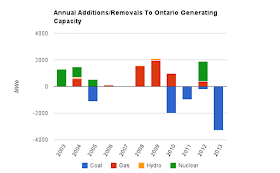 There have been ~2000MW of wind and ~600MW of solar capacity added as of the end of 2012.  While I believe the solar has some capacity value (the expectation of performance when required to meet peak demands), I thought it worthwhile to demonstate that Ontario has added ~2000 MW more traditional capacity than we will have removed when all coal units are removed from service.

The attributes of Ontario's generation mix are changes, and those changes demand more changes to recover the flexibility that will be lost as coal units are pulled.

Ontario's Energy Action Plan is one of those very political but officially government pieces that lays out the promise to eliminate coal by 2015  It is from the Eves PC government in 2003
The document notes phasing out coals "was a key recommendation from the all-party Select Committee on Alternative Fuel Sources."


A.8 Operation of Traditional Carbon-Based Fuel Generating Stations
Commentary
The operation of Ontario Power Generation’s (OPG) traditional carbon-based fuel generating stations was a major issue raised before the Committee, primarily due to the adverse air emission impacts of these facilities.
The Nanticoke, Lambton and Lakeview generating stations are among the largest sources of air emissions of the top 15 thermal electric generating facilities in Canada, according to national figures compiled by the North American Commission for Environmental Cooperation (2001 report; 1998 data).  The Committee believes that Ontario should work to eliminate its reliance upon coalbased power generation, unless future technological advances result in dramatically reduced air emissions that are equivalent to or lower than emissions from natural gas generation.  At the same time, Ontario should continue to adopt aggressive air pollution requirements to promote clean energy options.  Traditional carbon-based fuel generation constitutes only 19% of Ontario’s electricity generation by fuel type.  In some Canadian provinces, such as Alberta, coal-fired generation provides 81% of electricity generation (1999 figures).
Proposals were put forward to convert Ontario’s existing coal fired generating stations to natural gas.  The Ministry of Environment and Energy has mandated the Lakeview Generating Station in Mississauga to stop burning coal by April 2005. Concerns were raised regarding the re-powering of these stations in the event of their sale or lease, as part of the requirement for OPG to reduce its share of generation. It was suggested that one option might be to replace these stations with new combined-cycle natural gas plants.  The Committee was also concerned that a future re-powering of these stations with natural gas could cause a major increase in demand for this fuel, and a resulting increase in price.  This could affect the long-term supply and price of natural gas within Ontario.
In addition, the Committee reviewed an Ontario-designed battery/capacitor (passive electronic component that stores energy) technology that could store offpeak and intermittent power.  If proven, this technology has the potential to obviate the need for traditional carbon-based fuel generation.
The Committee heard that the coal industry believes that it can perfect ‘clean coal’ technology by 2007.  The Alberta Energy Research Institute is currently conducting research into clean power generation from coal.  However, based on current technology, Ontario should work to first eliminate coal-fired generation.  Oil and natural gas-fired generation should also be phased out.

30.  The Ontario government shall complete, within 12 months, an assessment of the feasibility and cost of converting all Ontario Power Generation coal and oilfired generating stations to natural gas.
31.  The Ontario government shall set stringent emissions limits that are no greater than the emissions limits for natural gas-fired generating stations for the operation of all current coal and oil-fired generating stations.
32.  The Ontario government shall mandate the closure of the Ontario Power Generation Atikokan and Thunder Bay coal-fired generating stations no later than July 1, 2005.  This capacity shall be replaced with a windfarm(s), possibly on the plateau adjacent to Thunder Bay.  Consistent with recommendation 16, the Ontario government shall mandate the closure of all remaining coal or oil-fired generating stations by 2015. 33.  Any requirement(s) to convert/replace current carbon-based fuel generation shall responsibly manage debt obligations associated with the original construction of these stations.
34.  The preferred long-term goal is to eliminate traditional carbon-based fuel generation and, wherever possible, all new renewable power sources in Ontario shall be used to displace traditional carbon-based fuel generation.
35.  The Independent Electricity Market Operator shall give preference to the sourcing of economic renewable power in the bulk dispatch of power.  Coal-fired generation shall be given the lowest dispatch priority.
36.  The Independent Electricity Market Operator shall take into account power dispatch policies in neighbouring states and provinces to ensure that Ontario does not import/export unwarranted amounts of non-renewable power.
37.  The Ministry of Environment and Energy should work with Environment Canada to ensure that air quality impacts of traditional carbon-based fuel generated power in other provinces and states are equitably mitigated.