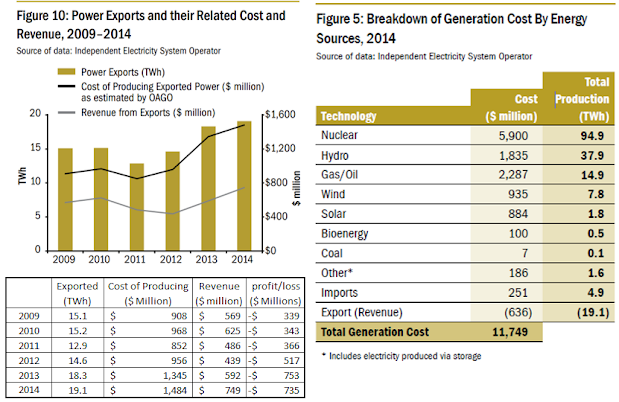 The annual totals for exported electricity are on the IESO’s website, as are summary figures. I work with the hourly numbers which I’ve brought into a relational database, which allows me to query them connected to other hourly data. Different files available from the IESO include “Exports”, “Market Demand”, and “HOEP” (Hourly Ontario energy price). The auditor appears to have used the simplest method of determining average cost - which presents lots of issues to quibble about, but none that would alter the trend this simple approach will reveal.

To determine an average annual price, per unit, of power the total cost is divided by the annual total market demand. The auditor determined the market’s valuation of power as the SUM of ([Market Demand]*HOEP]) plus the annual global adjustment charge (which is, or at least was, a charge in Ontario to recover the full cost of purchasing supply by collecting from provincial ratepayers the cost the market did not). If that’s confusing there’s little need to worry because I’ll simply show you I can use this method -determining the average cost of supply multiplied by the amount exported - to very closely approximate what is shown as “the cost of producing exported power” in the Auditor’s graphic.

Having established a methodology determining the cost of producing exported power we now need revenues from the sale of that power - which you might think ought to be easy. A hint that it is not is the IESO couldn’t provide the Office of the Auditor (OAGO) the same number for the same thing in the two different graphics for that 2015 report. One number is the value at the Hourly Ontario Energy Price (HOEP), which is the price on the market, but isn’t the price exporters pay. I’ll quote from a 2017 e-mail I received from another friend who’d asked a person at the IESO, “why doesn't data exist and be posted as to what we (Ontario) sold exports for?” The response:

The components necessary to calculate the amount that exports paid (or received) are available through the IESO’s public reports. The calculations require a small amount of effort pulling together some data, but fortunately the IESO’s data directory publishes two reports in a format that makes the calculation relatively straightforward.

The total amount that exports paid for a given hour is a combination of the export MW and the zonal clearing price calculated for each intertie separately. The IESO’s Intertie Schedules and Flows Report provides hourly export schedules by intertie and provides access to annual data (2010-2016) under the Transmission tab in the Data Directory. The IESO’s Realtime Market Price Report provides hourly zonal clearing prices by intertie, which provides access to annual data (2010-2016) under the Price tab in the Data Directory. You can find these reports on our website here.

If you understood all that you now know how the IESO calculated the revenues on exports for 2014 in Table 5 of that 2015 report from the Auditor. You can collect all the data for the 14 interties in both the export schedule and real-time market pricing reports (average the 12 5-minute intervals to get one hourly rate), build a table to translate the intertie names which differ in the IESO data feeds, and after linking up the tables with the translator table run queries to get your totals. Or you could trust me that this methodology not only reproduces the $636 million revenue number shown in Figure 5 of the 2015 OAGO report, it also matches the other annual figures provided by the IESO in response to a freedom-of-information request.

The value of exports at real-time prices (RTP) across interties from 2009-2014 is approximately $467 million less than the “Revenue from Exports” figure shown in Figure 10 of the 2015 AOGO’s report. We can’t replicate the method that produced the claim of $3.1 billion in losses of electricity over those 6 years as we can’t replicate the data the IESO provided as revenues - and there’s good evidence they won’t be able to either.

Late last January, when the IESO first posted its summary of 2019 data, it included, "exports contributed about $300 million towards meeting Ontario’s electricity system costs...The value of exports in 2019 will be updated when the data is available.” The data had already been available: it’s available the next day. The text remained at least until June, but was since updated to, “In 2019, exports contributed over $360 million towards meeting Ontario’s electricity system costs.” There doesn’t seem to be anybody at the IESO who can produce revenues from exports with their method used for one set of figures in the 2015 Auditor’s report, so if there was any justification for the other revenue numbers they provided in that report the organizational memory has long since forgotten which ass it was pulled from.

We now have a method for establishing the cost of procuring the supply exported, and a method for establishing the revenue, each of which matches figures provided in the past. With the methodology that can be established the losses from 2009-2014 are not the $3.1 billion reported in the 2015 Auditor’s report but $3.5 billion. In the following 6 years, from 2015-2020, losses were two and half times that at $8.8 billion.

The numbers themselves are, as I’ve mentioned before, debatable: there are many ways to estimate profit/loss on Ontario’s electricity exports, Debating numbers can be a useful tool for supporting ignorance: data is always imperfect, and assumptions are required for most calculations. The point of setting standards and methodology need not be achieving perfection but providing the discipline that trends become apparent over time. In 2020 the cost of producing electricity dumped on export markets was, by the methodology laid out here - intended to reproduce that of the Office of the Auditor General in their 2015 annual report - higher than it’s been going back as far as we could find data, while the revenue received on exports was lower than it has been. 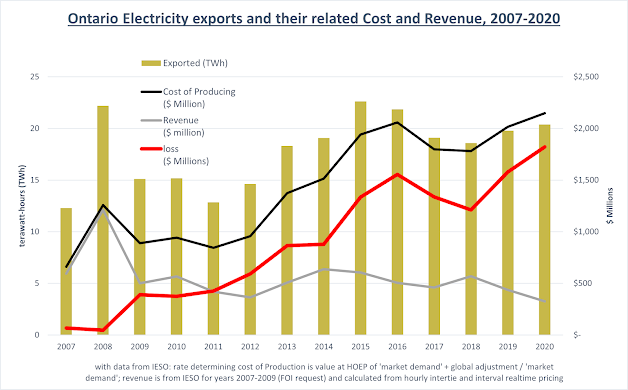 “What you want to do of course is try to manage your system as best as you can so that there's as little extra electricity as possible” said Ontario Premier Dalton McGuinty in January 2011 - 10 years, 187 terawatt-hours and $11.6 billion in losses-in-dumped-exports ago. That measures the quality of the system's management.
spreadsheet
Scott Luft at 10:11 AM
Share