The Ontario Energy Board recently announced Regulated Price PlanS (RPP) for the winter (November-April). New for this year is consumer choice: Time-Of-Use (TOU) pricing will remain the default option, but individuals can opt to switch to the tiered pricing structure that many will be familiar with from before they were forced onto TOU pricing. Some have asked my opinion on switching - which I'd given without thinking it worthy of blog post. Now that I've heard others opine I offer a blog post to defend my very simple advice - and comment on the choices in the context of cleaner energy policy.

If you use less than the level of usage set for the lower-price tier (1,000 kWh) you should switch to tiered rates.

That's it: no gathering up all your bills, getting your hourly usage by registering on the web with your local distribution company (LDC), and crunching the numbers.

Now for me rambling on to justify that one line if only to justify my simply statement while everybody else I hear is advising researching ...

The Ontario Energy Board has set the rates (based on work by a consultant) allegedly with a goal of recovering an average of 13.358 cents per kilowatt-hour (c/kWh) from both price plans. The TOU price plan assumes 66% of usage is in Off-Peak periods, with both Mid-Peak and On-Peak Periods equally sharing the remaining 34%. Doing the math with those percentages and the published rates for each period returns an average of about 13.2 c/kWh.

The subtext here is I am assuming most people are normal and can't make much difference in shifting their usage to Off-Peak hours. If you think you are quite special in this regard you can gather up all your bills and your hourly usage and crunch the figures using the online tools available from the OEB and LDC's - after which you will, I predict, find yourself alarmingly normal if you are a light user of electricity. 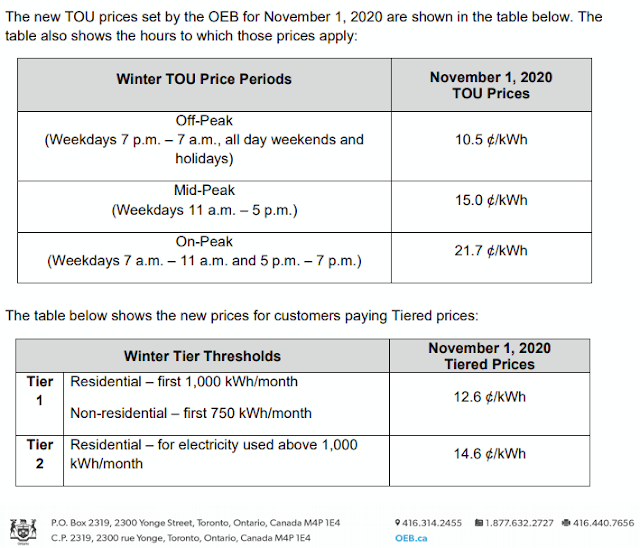 A little more interesting is trying to find how much consumption has to be in the high tier before a consumer with an average usage profile pays the same average rate as they would on time-of-use. My math indicates it's going to be about 38.5% of consumption, which means a consumption of about 1,625 kWh/month during the winter period. Between 1,000 and 1,625 kWh the savings from a typical consumption-profile consumer switching from TOU to tiered rates diminish, and those consumers averaging over 1,625 kWh/month would benefit by TOU rates just by being average in their consumption pattern - and those are also likely to be the consumers most motivated, and able, to shift their consumption to off-peak hours.
I feel my readers are disappointed thus far that it's been all math and no data, so I've done some querying of my own data stores - my hourly consumption back to when I first started downloading it, and seasonal TOU and tiered rates from the OEB. Google's Sheets program automatically set the left axis' $0 savings at the right axis' 30+ percentage of consumption in the higher tier. 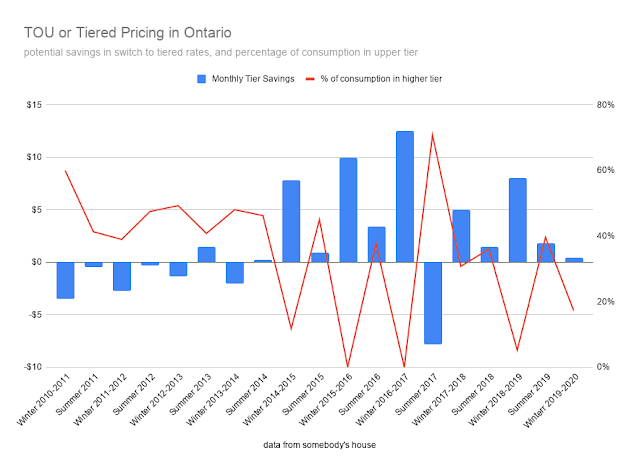 It's a beautiful thing, for me, to see the passage of time in this old house in a chart (and a little bittersweet as it will soon pass to new family). The data set starts with 5 people in the house, dwindling to 2, rising back to 4 - having somebody mining a digital currency for a while (summer 2017!) and, most relevant here, the switch to heating with natural gas during the winter 2014-15 period (a topic with its own blog post written years ago)

When I used to care about such things the people I met who considered themselves green due to their frugality in consuming electricity would be aghast at the awfulness of a household consuming over 1,625 kWh a month. While that is the point where, on average, it becomes more sensible to stay on TOU billing, it's above average by a lot. The regulator's news release on our coming rates included:

A consumer using twice what the OEB's "typical" consumer does would still be better to switch to tiered rates. I put "typical" in quotes here because it's a poor term to use. That 700 kWh/month may be the average in Ontario does not mean that a typical consumer has that consumption: a typical adult human does not have one testicle and one breast - although on average a human does. Electricity consumption is largely dependent on the share of energy consumed in a household that comes from electricity.

I've also phrased my advice on switching from TOU pricing to tiered rates simply on whether electricity is used to heat (air and water). If natural gas is the fuel used for heating then the availability of tiered pricing offers a savings opportunity on electricity - and that is interesting.

Ontarians had "smart" meters forced upon them, and the time-of-use billing they facilitate, through government regulation. The story of smart meters was part of a big story about efficiency and democratizing the grid to allow consumers to reap rewards from conservation - and yet the introduction of smart meters was an immediate rate hike for the most miserly consumers (for all the reasons discussed above regarding today's rates), and a waste of functional analogue meters. Today miserly electricity consumers can get a break on rates for electricity consumed by switching to tiered rates, but service charges are all moving to fixed charges from volumetric (if they haven't already) so they may very well see increases elsewhere on the bill.

What we don't have, a decade into "smart" metering, is rates for different activities at different times of the day. I was heating with gas this morning while prices were negative and 6 million kWh of trivial-emission potential supply was either being dumped on export markets or curtailed altogether - and every day many others are also heating water with gas as electricity is curtailed or given away for next to nothing. Much of the 13.2 c/kWh average cost we will see is due to requirements to pay for curtailed and dumped supply: some of the latest price increase is for dumping and curtailment more supply in the past rate period than anticipated.

The new rate option can allow people to save during this rate period - but if all do it'll come back on everybody next rate period unless we collectively consume more electricity than we have been. Increased consumption seems unlikely. A decade of "smart" meters and excess supply and we still don't have pricing tools to encourage electrifying more energy consumption in households.

Reintroducing the tiered pricing option from over a decade ago (for most) is progress as it introduces choice, but giving consumers with natural gas an opportunity to reduce their rate on electricity (mostly what this does) is a tiny victory.

It's as if those in control of policy for the last decade-and-a-half felt if meters were smart people need not be. Surely we can get better pricing options than just TOU and tiered pricing.