The year-to-date average unit cost for electricity for the typical Ontario consumer (class B) is up 16% from a year ago, while the average market rate (weighted) dropped to only $12.03/MWh.

I've posted less than usual thus far into 2016, but spent more time on database work and related pages at my data site. A lot of that work is for myself, allowing me to take in the latest data in a scroll through a weekly, or monthly, report, but I thought I'd use the halfway mark of 2016 to pull some interesting statistics together that I hope will communicate why I added some graphics, based on more speculative data, to those reports. 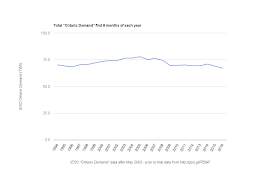 If you follow only the numbers the IESO (Ontario's system operator) features on its website, you would find the first six months of 2016 had the lowest total "Ontario Demand" on their records - even using meter data they've made available going back to 1994.


The record low "Ontario Demand" figure is of little real importance, but is useful in illustrating the changes to Ontario's electricity sector. The IESO's "Ontario Demand" is the generation from the suppliers in its system, including generation lost on transmission lines and the consumption of generators themselves. It does not include generation with local distribution systems, and that is the generation growing within Ontario - lessening "Ontario Demand". Better estimates of actual consumption of electricity in the first half of 2016 was down from the same period in 2015 (which was colder - and 2014's winter was colder again), but I find 2016 about equal to consumption in the first half of 2009 through 2013.

The graphs I developed for weekly and monthly reports include estimates of embedded  generation (Dx - distribution connected), and curtailed supply. Keep in mind first-half consumption in 2016 is similar to 2011 and 2012: 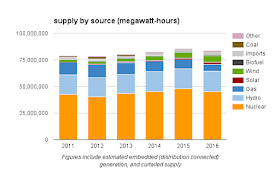 A different view of the same data (which is in this spreadsheet) shows what's rising over time (wind, nuclear, solar, hydro and imports) and what's down since 2011, which is not mostly coal but [natural] gas. 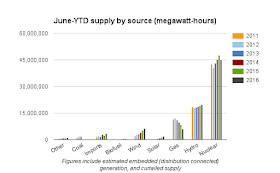 Estimating the total costs of each type of supply, we don't see the same small changes: 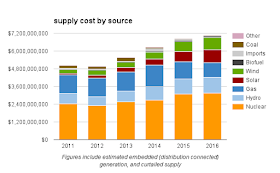 As with the megawatt-hours, here's the alternate view of the same data: 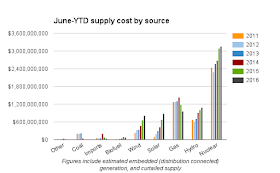 Notable here is the decline in cost for imports during the first half of 2016, estimated by the Hourly Ontario Energy Price (HOEP). Many imports, however, are wheel-through transactions (Quebec using Ontario's transmission system to export to New York, and beyond). Regardless, it is striking that import volumes were 77% higher than my estimate of solar generation, but cost just 5% of what solar did.
Perhaps the Ontario Clean Air Alliance should look at exports to displace something other than nuclear.

The HOEP for the period is particularly low. The weighted average for the 6 months being only a little over 1 cent per kilowatt-hour (kWh). The average regulated price plan cost/kWh is about 11 cents, so the HOEP is a poor representation of total cost. At times of sufficient demand, the HOEP is set by the market price of natural gas, which has been extremely low - although it was rising through June. The HOEP is particularly low as it's often set by the excess of committed supply given Ontario's demand levels - during these hours the price reflects what others will take power off our hands at.

One metric I don't share regularly is the market value of each generation type. The solar data in the chart is speculative, and particularly so prior to 2014. The wind data is not. Those wishing to understand the collapse in wind value should read Lion Hirth's The Market Value of Variable Renewables. 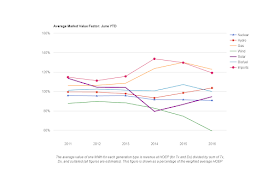 The next graph I'll show, from my regular reporting pages, demonstrates what generation ended up being for: "Class A" consumers have peak demand above 3 megawatts each month, "Class B" are remaining consumers. 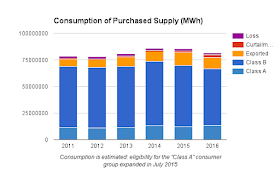 The growing share of red indicates increased "curtailment" - and connecting that with the declining value of wind, we see it is increasingly wind being curtailed: 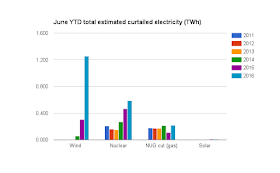 That 1.2+ TWh estimate of curtailed wind is significant in that IESO-grid connected (Tx) wind generators are shown producing a little less than 4.5 TWh so far this year, indicating over 20% of potential wind generation on the IESO's system was curtailed.

Charges aren't distributed evenly across these consumer groups, with Class A consumers paying less of the global adjustment (the difference between the contracted supply cost and the market value), and export consumers paying none of it. (for an fuller explanation see "Stakeholders" destroying the viability of Ontario's electricity market ) 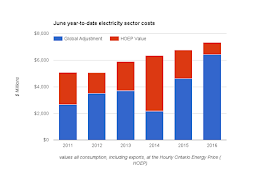 The last set of numbers I'll graph today corresponds to the penultimate graph in my monthly and weekly reporting, but I'm going to use more comprehensive data which should include other, non-generation, expenses such as spending at the IESO on efficiency or conservation or whatever the fashion is at the IESO. Using these figures has the benefit for the skeptical reader of providing a comparison for the average Class A and Class B commodity rates that will be shown in the Q2 2016 Ontario Energy Report when it's released 10-12 weeks from now. 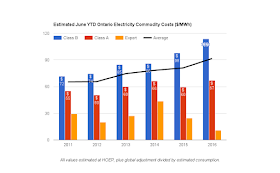 To sum up the statistics for the first half of 2016: