The cost of a sunny week in Ontario

Ahhhhh, springtime, and a streak of brilliantly sunny days in Ontario.
Obviously my mind turned to capturing some changes to Ontario's electricity sector that are not being reported on by the system operator (the IESO), or the writers of all the contracts for supply (the OPA).

Now that streak is broken, and the rain is here, I've taken a couple of minutes after updating my weekly reporting figures to compare the 7 day periods starting on the 18th Wednesday of 2009 (when Ontario had virtually no solar) and 2013 - when we have some (my estimate was between 650 and 700MW).

All solar capacity in Ontario is considered by the system operator as "embedded" generation - which means they don't see it or report on it.  What the IESO reports as 'demand' is not the amount of consumption in the system, but the amount of generation.  So without any solar data, the best way to estimate the impacts of solar output on Ontario's electricity sector is to compare the 'demand' shape from a period of comparable demand before solar capacity was substantial, and a brilliantly sunny week.

The change is quite dramatic.  While some of Monday-Friday changes might be explained by load shifting due to time-of-use pricing, the weekend is always off-peak pricing, and on the weekends the darkest hours are little changed, while what is being reported as demand is sharply down in the sunny hours. 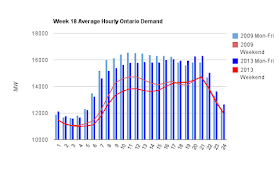 Looking at the average hourly figures (not just the change) is a little bit more arduous, but note that for both weekdays, and weekend days, between 2009 and 2013 - at least for a sunny weak - the peak 'demand' that the IESO controlled generators must meet has moved from the afternoon to the early evening.

The 7pm start of off-peak hours was introduced to pacify angry electricity ratepayers prior to 2011's election, but it was never intelligent, and it will get stupider with every solar panel. 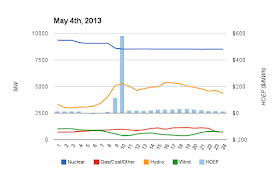 There were a couple of lessons about electricity pricing in the week's data.  On Saturday morning a nuclear unit at Darlington tripped offline as demand was growing, no variable fossil fuel units were hot, and wind was was waning - the result was the highest hourly price in over 4 years.  That sounds alarmist, but the average rate for the day was still only $48.06/MWh.  What the spike should remind people is that pricing is determined by the relationship of supply and demand - not by demand levels alone.
Saturday's pricing showed the impact of a traditional generator tripping off, but as intermittent generation is added to the system, the price is more likely to reflect a failure to forecast generation levels as an issue with demand levels - as was demonstrated the following night when the wind output in hour 20 was far less than forecast in hour 19, and the hourly price spiked to $446.17/MWh.

These price spikes weren't expensive parts of the week - exports and curtailments were.

Weekly graphs on my data site demonstrate, for the week, the twin issues of a large nuclear baseload and the tendency of wind output to be strongest overnight increased both exports, and curtailments: 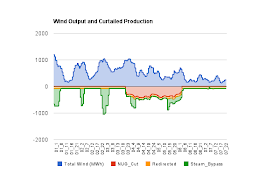 This graphic shows Saturday and Sunday as days 04 and 05.  It therefore indicates high winds on 4 nights coincided with curtailments at nuclear facilities, and on the weekend it shows ~400MW of non-utility generators were idled (a process that needs to be scheduled in advance), leading to the probability gas generators were being paid not to be online during the price spikes.

The graph I end today's post will show that the "Market Change" from last year spiked overnight.  I showed "Ontario Demand" figures earlier - the "Market Demand" is simply the Ontario demand plus exports - all of which is faked as it's actually the sum of all generators supplying the IESO grid plus all imports. 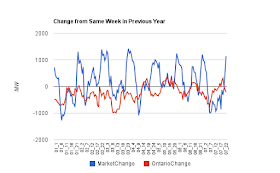 Exports have been particularly high overnight despite curtailments.  My estimates on the cost of supporting exports indicate the previous 3 weeks are in the top 5 since the market opened in 2002.

The second estimate of the Global Adjustment charge indicates April 2013 will have the highest commodity charge since the global adjustment was introduced in 2005.

May begins looking a lot worse.

Quick calculation - 670MW of solar capacity assuming 28.5% CF (twice the average - but for a very sunny week!) at a conservative, for Ontario $500/MWh ... it's about $16 million for solar contracts for the week (which is not far off my estimate of subsidizing exports for the same period)
Scott Luft at 1:31 PM
Share