Thoughts on some recent articles of interest - combined with fresh Ontario electricity system data for week 17 (Apr. 24th-30th), and preliminary reporting for the month of April, (including new supply cost estimates) 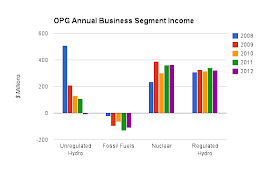 Parker Gallant and I co-wrote a column which appeared in May 2nd's Financial Post.  A couple of graphics might have emphasized a core argument in Ontario Power Generation turning water into debt: that the hit to OPG's earnings in recent years is in driving down the profitability (now a loss) of the unregulated hydroelectric business segment.

Some comments on the article indicate people have been conditioned/brainwashed to repeat claims about OPG in general, and nuclear in particular, but the facts we point out indicate other business segments have not changed much.- the only generator left exposed to market pricing is OPG - and they are only exposed in the unregulated hydro business segment.

The Ontario government introduced a budget on May 2nd, and the document feigns an update on the residual stranded debt, but really it just takes the budget 2012 estimate and makes it firm - promising they'll care to explain things before April 2014.  Everything I recently wrote in Stranded Debt - Abandoned Responsibility remains relevant. 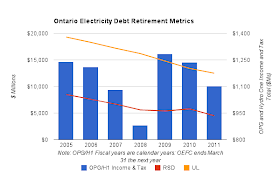 Notice that after 2 years of the "unfunded liability dropping" while the "residual stranded debt" went up, suddenly we are to believe the stranded debt dropped as much (or more) than the total unfunded liability in the year the OEFC ceased to report; a year which was less profitable at the provincial generator (and Hydro One).

Tom Adams has an interesting post this week: Proposed Ontario Energy Information Service.
Some excellent points are made about data  quality in Ontario and Canada.  One of the comments on the article in the Financial Post was that "OPG FAILED TO INVEST IN RENEWABLES"; aside from the fact OPG is prohibited from taking advantage of the rich contracts for renewables, last I checked the hydro generation being devalued was renewable.
Here's an example of the shoddy data available which is also an example that there is still value in shoddy data: 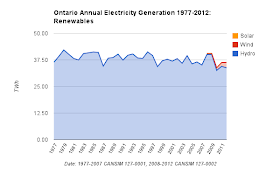 The figures for 2012, illustrated in this graph, are 2,584,538 MWh of wind, and 259,715 MWh for solar (a TWh being a million MWh). The hourly data from Ontario's system operator (IESO) shows 4.6TWh of wind production, and not all wind production is reported on by the IESO. I'd estimate both the wind and solar production to be double what Statistics Canada's CANSIM database indicates.
But the rules don't seem to have changed significantly in reporting hydroelectric generation, so the data is still useful in demonstrating recent extremely low levels of hydro production.
Tracking by week, using IESO data, I've seen the first 17 weeks of 2013 have hydro production down compared to the same week a year earlier - and 2012 was a bad year for hydro!
Adams notes the value of existing information at the IESO, but then jumps to seeing the Meter Data Management and Repository (MDM/R) activity at the IESO as a positive move.

I did not address the IESO's 2012 Annual Report when it was released, but let's review the MDM/R.  The IESO's 2012 Statement of Operations shows an actual deficit $36.5 million above plan, and smart metering entity deficit $36 million above plan - the reason being they had planned revenue of $41.5 million for a smart metering charge that didn't happen - until the regulator approved it in 2013.
I think charging ratepayers for the MDM/R indicates there is no confidence that it will have value.

You know what apparently wouldn't be useful?
Staff who know how to work with the data.

Another recent post on this site included some levelized unit electricity cost (LUEC) figures - as they related to the global adjustment.  April is a good month to show the limitations of LUEC models: abundant cheap hydro, and a productive month for cheapish nuclear being characteristics of the month which preliminary estimates indicate will be the most expensive commodity charge in a decade ($28.61 HOEP + $54.55 class B GA = $83.16)
. 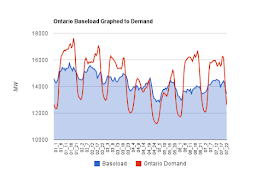 That was the first year-over-year growth in wind production in 6 months.

It couldn't have come at a worse time.