The second piece of data I get on import/export figures is the Daily Market Summary from the IESO.  The summary for the January 21st indicates the IESO will now report much lower exporting activity than indicated in the intertie schedule data; it indicates an average net export of 2269MW, which is 420MW lower than the average net export in the intertie schedule report.

The third data source will provide the hourly data behind the Daily Market Summary, and is inclusive of all dates back to market opening in 2002; the Hourly Import Export Schedules .csv file which is updated each Friday.

I've listed the top 15 net export hours as per the intertie data - where the data exists in the .csv file, I've shown it, and indicated the difference.

Note that the variance is a constant 514MW on November 12th.  I've explained the difference previously, arguing it is due to the output of generators on the IESO grid that is bound for Quebec.  The specifics are vague, but Quebec's transmission lines are high voltage direct current lines, and Ontario's are not: there are grid connections that can alter the flow accordingly, but there also appear to be generators that can change their connection from Ontario's grid to Quebec's.  The largest of these is the R.H. Saunders Station, on the St. Lawrence river at Cornwall; Cornwall's electricity consumers are one of the very few exceptions that don't have their rates set by the Ontario Energy Board, as they purchase their power from Hydro Quebec.

It does greatly distort reporting on electricity in Ontario.  The IESO is not reporting generation in Ontario in a number of ways, excluding embedded, self-scheduling and generators feeding directly to other grids.
The IESO doesn't report actual demand, but rather defines demand as generation (plus imports) ... so not reporting on supply also doesn't report on demand.
The full increase in net export levels is already being disguised in their reporting, and the growth in embedded generation will increasingly understate supply changes and therefore underestimate demand in Ontario.
These data issues aren't the type of stuff that receives attention. 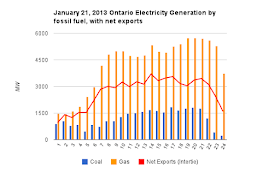 What does receive discussion as politicians and lobbyists work a "coal kills" messages through the press is that we are eliminating coal-fired generation.  This "information smog" presented itself recently as Ontario's Minister of the Environment connected "smog-heavy coal-fired" generation with 10000 deaths a year.

Yesterday Ontario's production from coal-fired generators was ~0.7% of 2012's production.
At no time did that generation exceed net exports

Maybe those who implied coal killed 10000 people last year should be asked why another 60 or 70 were sacrificed, to export electricity, yesterday.