I've run some data analysis and noting a couple of metrics that indicate characteristic impacts on an electricity market of increasing intermittent generation guaranteed priority access to the grid. 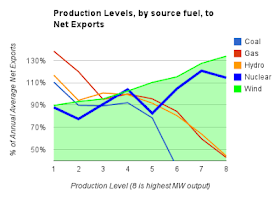 For each of the main sources of electricity generation in Ontario, I found the minimum and maximum levels of the past couple of years and then grouped the production into 8 levels, calculating average HOEP (Ontario market price), and net export volume for each.

As expected, net exports were much higher during hours of higher wind generation.  This is in stark contrast to hydro, coal and gas generation. 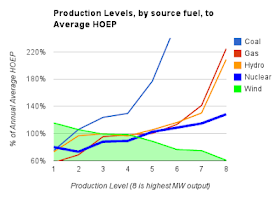 The price relationship is, as expected, the opposite: the higher the wind production, the lower the price.  In 2012, this was unlike all other sources, including nuclear

Substituting the actual grouped production levels and average HOEP pricing and net export volumes, it's clear that as wind ouput increased in 2012, so did exports, while pricing declined.

Fortunately, 50% of the time wind output was less than 400MW. 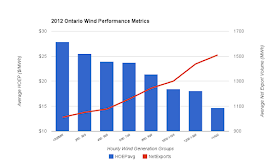 A shared spreadsheet containing the figures behind these graphs also includes the data in monthly format, which may be informative to those interested in the data and comfortable with pivot tables.