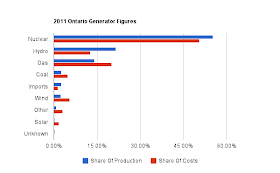 I worked the data to estimate the net contribution of each generator to the global adjustment.  By "net" I mean the difference between what the end consumer pays for the generator's output, and what the generator receives.  In a world of perfect data, this method would balance to $0.


Aside from working on figures to show the relative costs of each supply, I also indicate a breakdown of costs comprising the Class B commodity charges that most bills in Ontario are based on - the exception being the large Class A customers.
The breakdown includes the cost of the OPA's consevation programs, the addtional burden on Class B customers creating by the creation of the Class A category, and the cost added by selling exports cheaply. 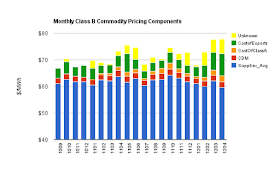