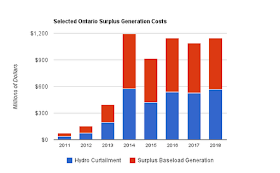 
The IESO SE-91 process has noted a couple of issues indicating 'stakeholders' efforts to maximize their revenues.  The suppliers' concerns revolve primarily around proposed rules for dispatching supply off.  The IESO is passing the buck, perhaps rightly, to the Ontario Power Authority (OPA), on the issue of costs related to the dispatch rules.  The OPA and IESO are targeted for merger by the government, and it is likely that final decision on rules must come from the Minister of Energy, Chris Bentley.
The cost of those rules is hugely important because of the large amounts of renewable energy that cannot be utilized by the power system.  The FIT's have defined that an amount (ie $135/MWh in FIT 1.0 for wind, $110 in FIT 2.0) is to be paid, and suppliers can show due diligence in forecasting potential production levels; the trickier figure to forecast  is how much of that possible production the grid can/should accept.

The discussions about curtailment involves issues of Surplus Baseload Generation (SBG), CO2 emissions, and exports.  The proper issue, from a ratepayer perspective, revolves around when our contracted supply, and actual baseload sources (which are sources that ouput a constant energy, meaning power, at a low marginal cost - often with huge capital costs invested up front), exceed the demand in the province.  Demand currently is remaining around the level of 2009, which is also the level of 1989, so we can anticipate little change in demand.  This allows forecasting to estimate how frequently, and by how much, our supply commitments will exceed demand.

It is now broadly acknowledged to be quite often, so the market price in Ontario should remain quite low.  In Ontario, as in many adjacent markets, the market price moves with the price of natural gas - but the price is consistently lower in Ontario than other markets.  The SE-91 hearings frequently refer to assumed export levels (~1500-2000MW).   They should not. The full cost of production cannot be recovered from exports, so the discussion on export levels is a discussion of how much power we can sell at $20/MWh before we stop paying $110 - $800/MWh to purchase the supply.
If consumers were stakeholders, the answer would be, "none".

Last year I analysed the costs of adding wind energy to Ontario's electricity system, within the supply context of the Liberal government's Long Term Energy Plan, in part by forecasting supply and demand on an hourly basis through 2022.  My assumption at the time, I hope wrongly, was all FIT contracts would pay out on all production, even if it was curtailed.  That analysis estimated 3 costs attributable to intermittent wind:


SBG cost, and the avoided hydro, should be valued at the price of wind ouput, as this is the cost to the consumer of purchasing wind output while letting water flow over the falls, instead of through the turbines in the Niagara system - or other foregone hydro.  It is also the cost when paying nuclear units to curtail production while paying full price for wind output, and it is very close to the price when purchasing expensive electricity strictly for export at 1/6th the price (which is the case so far in 2012).  My 2011 analysis showed the cost of wind, when paying for every MWh produced, would be ~$263/MWh, for the utilized production, by 2014.

Thing have gotten worse since then, with the scheduled addtions of capacity accelerated, and the FIT 2.0 announcement adding wind (to ~8000MW) and all renewables to 10700 (so ~2700MW of solar capacity).   I have rerun my data exercise, adding in a solar estimation and the scheduled changes to wind capacity.  The numbers provide the magnitude of the importance in settling compensation rules, if there is to be any compensation, for curtailed/dispatched down supply.  Most years ~40% of industrial wind production will either bump other contracted generation, be curtailed, or be dumped on export markets.

I've included annual totals to demonstrate what this forecast measures.  Hourly forecast for demand are made for demand, nuclear, contracted must take supply (NUG's), baseload hydro, wind, and solar.  If that supply is not enough to meet demand (ie. NOT SBG), then the weekly forecast of available hydro is distributed (if it can't all be used, it is considered 'foregone hydro' as shown in the chart.  If there is still unmet demand, it is considered to be met by 'Gas/Coal' generation.

In reality, gas and coal generation units have more operating constraints than the model allows.  The actual figure in 2011 for those units was closer to 27.3 TWh (not the 19.1 shown as necessary in my modelling).   Practically, this means the model likely exaggerates the proportion of wind output that is utilized to meet domestic demand.

I have not discussed the capacity charges one might attribute to wind, nor the cost to Ontario's treasury of depressed pricing and dispatched off hydro.  Neither of these issues deals specifically with the issue at hand in clarifying rules regarding dispatching off of renewable supply; rules that are uncertain in not only FIT 2.0, but also apparently remain vague in FIT 1.0 contracts.

Will Mr. Bentley commit Ontario ratepayers to spending ~$1 billion a year for dispatched off, or dumped, FIT contracted energy?

Hopefully Mr. Bentley does not use history to guide his decision.  We know Ernie Eves rate freeze added billions, over 3 or 4 years, to the debt repayment schedule, and we know Dalton McGuinty's OCEB is also taking about $1 billion a year from Ontario's line of credit.

We have a word for politicians who show reckless disregard for the public purse with billion dollar decisions in the electricity sector.

We call them, "Premier"