The weekly report has been updated to display week 8.
Same outcomes again, with demand down, Hourly Ontario Energy Price (HOEP) off by about a third and moving in a narrow range.
For the second week the highest price of the week was a spike at 7pm Saturday, as demand went up as wind production dropped.  It seems something is both attracting television viewers and sucking the air out of sections of the province.


The second highest price was at 7 pm on Sunday.
Notably the week, as the week before, and February as a whole, saw an increase in coal generation over last year's February - and natural gas production a drop (very slightly).

I will be working towards a monthly report that will also attempt to put this year's data in perspective against previous years.  Here's a graph (YTD) that includes 'Demand Reduction' as a generation source -comparing to 2005 as a base year (demand in 2005 is the base year as it was the annual peak in Ontario demand) . 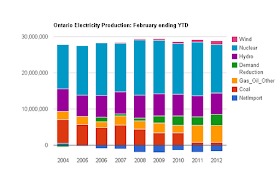