“The findings reflect reasonably consistent patterns of price response. At the national level, electricity price elasticity of -0.13 in the short run and -0.42 in the long run have been estimated.”

I first quoted that sentence, from a 2010  Electric Power Research Institute (EPRI) analysis, in June of last year, in an article related to a bureaucrat's report.  Recently, another bureaucrat of sort, Don Drummond, released a report that offered some advice that provides a timely excuse to revisit the price elasticity of demand with respect to electricity.

The price elasticity is the figure computed by dividing the change in demand by the change in price - if demand drops 10% when the price rises by 100% (doubles), the measurement is -0.1, which is a frequently noted figure for electricity. The number would vary along the price/demand curve, so all figures can only be guides.  The EPRI study noted short term as; "a time frame of less than three to five years, during which consumers do not have time to make investments in new capital stock."  In clear terms a price increase would have a greater impact in the longer term, when consumers have time to make operational decisions based on the new price levels.


The first chart, indexed to 2009 equaling 100, indicates the pricing in all jurisdictions was roughly double the price from 1982-1983, but Ontario surged in pricing in 2001, peaking in 2005, coinciding with the attempts to privatize both electricity production, and transmission.  The surge didn't occur in neighbouring provinces, both of which happen to have public electricity sectors, nor in neighbouring US states; where only New York saw an escalation early in the 2000's, less severe but of longer duration (to 2008)

Regardless, with prices rising about 75% between 2000 and 2005, the EPRI study, on price elasticity, would suggest a drop of about 10% in the short run, and closer to 30% as longer-term investments as plans adjusted to the new reality.  Other factors were also at work in Ontario, including the often cited rise in the valuation of the Canadian dollar, and the recession.  In the sector of the economy with the greatest ability to adjust consumption, manufacturing, the drop has been more severe than the 30% price elasticity suggests. 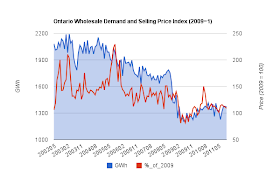 IESO (Independent Electricity System Operator) data is available, for wholesale market consumption, starting in May 2002. From the CANSIM data the price rise began a couple of years earlier. It appears that what occurred in 2005 was demand destruction - the industrial customers comprising the wholesale market began leaving in substantial numbers. That trend was simply exacerbated by the recession of 2008-2009.

There has been some acknowledgement, in recent activities in the governance of Ontario's electricity sector, of the fundamental inability of the economy to handle higher industrial pricing. The global adjustment now has 2 streams - class A and class B - allowing, and actually inviting, larger users to trick the system into providing them a lower rate. The class A user is the largest, and we can see the reality of industry requiring lower prices as we look at the divergence in the commodity charges for what equates to industrial, commercial, and residential users. 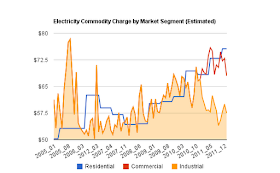 The reality of the need to control costs seems to have finally sunk into the government's head when Xstrata pulled one of Ontario's largest single consumers and moved the production to Quebec.  Over a year later Ontario continues to produce more electricity that it can consume, which  it dumps in markets at 1/3rd the price Ontarians pay, and now the province has the added issue of  "higher than acceptable voltages in the Timmins area," due to the reduced demand (quote from page 14) .


The need to control industrial electricity costs exists all over the world.  The USA's IEA shows the lower pricing, and some countries in Europe, such as Austria, frequently don't even collect the statistic as individual agreements are negotiated with each large customer.  The striking thing about Ontario is the attempt to adhere to a principle that all should pay the full cost of electricity, unaccompanied by attempts to control the full costs.  As the demand destruction became unmistakable, the Association of Major Power Consumers in Ontario (AMPCO) succeeded in lobbying the government with the justification for lower industrial rates. 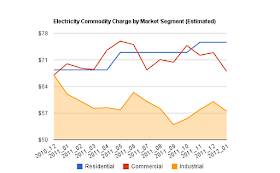 The method for lowering rates is absurd, but the reality of political economics dictated the necessity of lower rates. The success of the industrial lobby came with the introduction of a separate class of the global adjustment , starting January 2011. The same graph, as above, limited to the time since December 2010, shows the immediate divergence in pricing.


The changes to the global adjustment mean that whatever the large, Class A, customers are saved is added to the bills of other customers.  Class B, inclusive of small manufacturing and small businesses (commercial) would pay their allocation monthly, whereas residential customers would have their share blended into their rates, with both the older two-teir plan and newer time-of-use rates designed to recover the full cost (the rate history is estabished by the average RPP rate shown on this Ontario Energy Board page, currently 7.565 cents/kWh or $75.65/MWh).  In other words, those rates should be the same over time - if the pricing isn't as forecast, a variance account would shift the difference to another period for residential customers.
Should be ... but because the Class A implementation is nonsensical, and because the most recent change in residential rates (November 2011) started a divergence between residential rates and class B rates, it's worth mentioning the pressures that resulted in the invention of a scheme to lower industrial rates are equally true for small businesses.

The Canadian Federation of Independent Business (CFIB) surveys the 'major cost concerns' of small businesses monthly, with the results shown on page 4 of it's Business Barometer.'  The January 2012 barometer shows a higher percentage of respondents are concerned about 'fuel and energy costs' than any other metric (64% - only 11% being concerned about foreign currency).  Separately, the barometer presents Ontario's businesses as being slightly more concerned about "taxes, regulations" .
It seems likely the same political and economic forces that demanded large industrial rates be curtailed will demand the same for other businesses.  It would be surprising, to me, if the residential rates, which were sent higher in November, did adjust back to the commercial rates.

This makes economic sense - which means the Ontario Clean Energy Benefit is nonsense.  The OCEB was introduced to purchase an election - which it did.  In their main campaign document, the Liberal party that created it described it as helping "families, farmers and small businesses manage the costs of turning to cleaner sources of power – like wind and solar."  As the province is running massive deficits, in fact what it does is pass onto the future taxpayer the full cost of profligate and irresponsible public procurement/contracting.

In selling a recent report, pop economist Don Drummond appeared on the Ontario Today radio call-in show.  20 minutes into the second segment, a caller, "Norma" asks if they had looked at specifics on wind energy procurement with Samsung, and she noted the long-term liability undertaken with the Korean syndicate.  While Drummond answered with economist-like words, he starts with ignorance on the reality of existing capacity, and ends, in answer to whether they actually looked at the "wind turbines specifically", with "We did not."

That is unfortunate.  As the attempts to get more out of the largest users failed, and the capitulation took the form of transferring more costs to smaller businesses, which is either failing or will also fail (depending on one's view of the OCEB), the cost of all such policies will end up on the smallest consumers, which are residential consumers.  That's also an economic issue though, because increased energy spending means decreases in spending elsewhere, particularly in lower income households.   This was a trade-off in transferring taxes to consumers in 2009, when consumption taxes were added to energy to offset reductions to corporate tax, and it's the trade-off in energy pricing too.


A main impediment to economic growth is the ability of consumers to consume.  The CFIB's Barometer has "insufficient domestic demand" as the main 'operating challenge', and the sectors most pessimistic are retail, and hospitality.

If we were looking to an economist for a road-map out of debt, we chose very poorly.  There is no excuse for not investigating spending problems, because there is no good solution in finding some other group to pay.