the IESO's continuing assault on consumers

The COVID-19 pandemic is affecting most aspects of life, and Ontario's electricity sector is not, and cannot be, exempt. It appears unseemly to discuss electricity hucksterism during a time of crisis, but hucksters came to the fore during the last big crisis (the financial one of 2008/09), so it would also be unwise to passively allow more heists.

A week ago I posted an article on Linkedin: A massive excess of electricity. I really can't say why I didn't post it here on the blog, but I will briefly discuss its origin. There were two announcements that I'd commented on in social media channels (Twitter and Facebook): the IESO noting a steep drop in demand and Ontario Power Generation (OPG) deferring the start of a refurbishment outage at a nuclear reactor. Upon double checking through version of the IESO's daily adequacy reports to confirm Darlington 3 was no longer being removed from service I discovered another nuclear outage has also been cancelled. Each of those things was unfortunate for consumers exposed to Class B electricity pricing in Ontario - and the taxpayers subsidizing the Regulated Price Plan consumers who once were - but combined I wrote the suddenly additional  3,350 MW of excess supply will lead to spectacularly high, record, commodity pricing.

Those things were, in my opinion, unfortunate. With social distancing the increase in personnel on sites required for outage work might not be feasible, and demand is low for reasons that can't be responsibly countered.

Yesterday the head of the I____ Electricity System Operator, (IESO),Peter Gregg wrote a message to, "our market participants," in which he explained the massive excess supply is deliberate:


One of the most important steps we’ve taken in recent weeks has been to work with market participants to minimize the number of generation facilities and transmission elements that are out of service. Although a certain amount of redundancy is essential at all times, this redundancy is especially valuable to provide the flexibility the system needs right now

I read something yesterday that reminded me of that old song: "Hey ho, hey ho, Peter Gregg has got to go."

Don't know it?
You haven't been paying attention.


Maybe the I is for "Incompetent."

If Peter Gregg needs a massive surplus of electricity it is because his IESO is, compared to other system operators, uniquely incapable of operating a grid without massive excess supply. Somewhere in the eastern interconnection operators are balancing supply and demand. Over the first nine days of April the rest of the interconnection is doing so with an average of 2,870 MW (Megawatt) of electricity from Ontario. The IESO pays an average of over $92/MWh (megawatt-hour) and sells it for about $8. Another $4/MWh may be recovered as congestion pricing, but that's a whole other murky topic. I'll simply estimate the hourly loss at $80/MWh multiplied by 2,870 MW, or $230,000 per hour.
That's over $165 million a month that will be added to Ontarian's global adjustment charges to cover the price of purchasing electricity that was exported.

Maybe the I is for "Inadequate."

Maybe the IESO has a generation mix that can't be operated efficiently. Grids don't only need energy, but other types of supply for auxiliary services and operating reserves. Maybe Peter Gregg's IESO is working, "with market participants to minimize the number of generation facilities and transmission elements that are out of service," because they are generators that are needed for some reasons that aren't being communicated. Maybe Ontario needs more of these services because of the generators creating the excess supply.

Gregg writes, "Operating the grid - especially at ta difficult time like this" is really gosh darn hard (I'm paraphrasing) partially due to an "ongoing challenge...to forecast demand." It's something the IESO would be better at had if they been serious in the past, but they've lacked focus on two aspects of their so-called market: supply and demand.
They're reporting on hourly embedded generation is non-existent: that supply impacts the market by reducing what they call "Ontario demand" which is actually demand for supply from large generators on the IESO controlled grid (ICG).
They also long ago foolishly chose to be responsible for forecasting wind output. Because there's also distributed wind generation (all contracted, with the IESO), underestimating wind output will underestimate both supply and demand - and overestimating wind will also overestimate supply.

Maybe the I is for "Insincere."

Maybe the biggest issue is the variance in supply from the ICG grid is much more unpredictable as the share of distributed supply grows as overall consumption drops - in part due to the IESO's unaddressed lack of visibility of distributed generation at an operationally useful scale. Personally I think this is the main reason the IESO looks like such a poor market operator - requiring wasting over 20% of supply on a pretty consistent basis. And yet they've only communicated challenges in hand-wavy terms like "flexibility."

I have a solution to reduce the "amount of redundancy" that is rather stupidly considered essential at this time.

Shut down the generators that increase the variance of the demand distribution, without providing significant flexibility. Pretty simple stuff - instead of dumbly increasing flexibility reduce the need for it.

What would shutting off all wind turbines, whether they're on the ICG or embedded in distribution networks, cost?
Not much. Output from wind turbines, including curtailment, has been worth less the $5/MWh this April. The market value of all wind was about $2 million over the first 9 days of April, while the cost was about $32 million. But the market revenue needn't drop at all - because in Ontario we're spilling a lot of water that the public generator (OPG) not only could generate power with, but will be compensated for not using generating electricity with (in future rates). The IESO probably hasn't thought about this as it has never delivered an accounting of curtailed hydro (which seems kind of negligent as there's curtailment at sites they contract).

Here's an example using a recent calm weekday (April 6th) and a windier one (April 9th). It demonstrates that more wind meant less hydro, more exports (shown as fewer net imports), and less than a quarter of the wind actually displaced generation from natural gas. Not shown is that electricity was essentially free on the windy day (averaging $7.5/MWh less than on the calmer day). 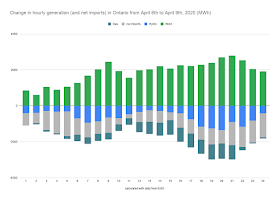 I don't expect the IESO to shut down all wind turbines to halt the increasing unpredictability in their system, but I do think if they're not going to shut the things down during this period of massive excess they should be able to make a credible argument for not doing so.

Hydro One owns and operates the transmission system. They can (and do) operate it.

The so-called hybrid market is dead - it serves only to support dispatch algorithms at the IESO which are in the process of being junked anyway, to be replaced in their increasingly unambitious market "renewal" project.
The public generator, its subsidiaries, and Bruce Power can provide all the electricity Ontario will need for the next couple of months.

Peter Gregg may be opining on what else would make the IESO's life easier, but given the IESO's disinterest in operating an efficient system that provides value to all consumer classes I suggest the government might start opining on how much longer the Interim Electricity System Operator should exist.