Comments on the original graphic included thoughts from the "electrify everything" perspective. I responded with too much caution, noting shrinking supply. Having given topic some more thought, I've added dumped exports as supply that has been available to Ontarians over the past years, on top of curtailed potential supply and under-utilized gas generators. In this post I hope to provide some context to the graphic, and show why coming changes in supply don't present a challenge for meeting Ontario's annual electricity needs, if not its capacity requirements.


A very brief overview behind the numbers illustrated:
One popular way of putting electricity measurements in context is number of homes. The average annual residential consumption in Ontario is 9 MWh. Over the past decade Ontario didn't utilize low-cost supply that could have powered 4 million residences. The Ontario Energy Board has shown the total number of residential consumers in the province rising from 4.2 million to 4.7 million over the period, so the excess equates to well over 80% of the province's residential consumers.

Put another way, every household in the province could have used 80% more electricity over the past decade at very little incremental cost. Residential rates are hard to pin down due to the multiple local distribution companies, consumer classes, and changing government tariffs and give-backs: my own "all-in" rates rose from $106/MWh in 2008 to $228/MWh in 2016. In 2008 the energy component of the cost was $54/MWh - equal to the cost of un-utilized supply for 2008 in the graphic above. 2009-2018 is the decade of excess supply in my historical analysis. The ridiculous [un]Fair Hydro Plan makes "all-in" residential pricing analysis even more of a challenge after 2016, as it defers a large share of cost into the future, but I'll estimate if every home in Ontario had consumed 80% more electricity over the past 5 years the average bill increase would have been below 15%.


if every home in Ontario had consumed 80% more electricity over the past 5 years the average bill increase would have been below 15%.

I should note that I don't consider number of homes a good measurement - or even a mediocre one. Residential consumption is only a fraction of the provincial total which has been around 141 TWh over the past decade. The un-utilized low-cost supply has been 25% of that.

How much more electricity could be consumed through "electrify everything" actions? I'll mostly leave that question to others. There are some hopes with electric vehicles (EVs), heat pumps, and I still believe hot water would have to become a focus. However, since I did have an all-electric household, ran to gas after years of rate increases, wrote about it, and subsequently have enjoyed the affordable comfort and cooking on a responsive stove I'm going to leave evangelizing on electrifying everything to more credible voices.
I hope EVs are consuming over 5 TWh a year by the end of the next decade, but I am not optimistic on electricity displacing natural gas in homes and therefore have a hard time seeing more that 15 TWh of consumption increase.

Regardless of what occurs on the demand side, the excess in supply should decline.

In 2019 there will be pressures on cost as another 900 MW of gas enters commercial operation under a net revenue requirement contract, and as large a wind facility (300 MW) enters commercial operation at a contracted rate that is, as far as I can tell, as expensive as any Ontario has ever awarded. This additional supply will push up the excess, under my definitions, by 4.5 TWh per year. This upward pressure will be temporary.

In 2020 one nuclear reactor (Darlington Unit 2) will return to service after 3 years being refurbished, but two more reactors (Darlington 3 and Bruce 6) enter refurbishment. The refurbishment schedule for reactors continues through 2033, with the Pickering nuclear station planned for retirement at the end of 2024. I only anticipate nuclear reductions nearing the current level of excess in one year (2025), but I do see the level of excess being reduced to one-quarter of what it has recently been. 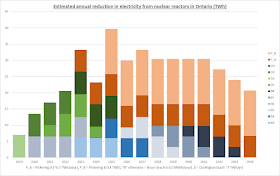 I see nothing in the coming decade that should cause people wishing to electrify everything to hesitate. There may be some price spikes in the mid-2020's but they're like to dissipate before long.
I also see little rate pressure. There's a lot of fear spread by the anti-nuclear contingent about the costs of refurbishment, but these increases are largely already in current rates.

I have not shown the nuclear reduction won't cause problems for the electricity system, which needs to be able to deliver supply to match demand at all times. Adequate capacity to do that is another topic.

The production of the Pickering nuclear generating station, which will disappear, is currently priced as expensively as any other nuclear production, and I've now shown there's enough low-cost supply potential to replace it. This should be positive news on the overall system cost front, but the system operator has the ability to reduce the cost benefits through wasteful spending.

That would be consistent with their history in spending $3.6 billion on conservation through the past decade of supply abundance.