f in efficiency: Free-riders of the soft path

There are lots of opinions on energy, but only one most acceptable conclusion to a discussion of what actions should be pursued - it is some variation on, "and of course efficiency, we have to do all the the conservation we can first." This signals everybody to nod approvingly and terminates the discussion.

I don't agree - which is a difficult position given the culture that views any energy analysis with the assumption "efficiency" (often used interchangeably with "conservation") is the most effective way to reduce costs. In this post I'll challenge the usefulness of a perspective that values negawatts above megawatts.

Before moving to some foreign data from the American Energy Information Administration (EIA), I'll introduce a graphic showing both official estimates of a levelized cost of energy (LCOE) for efficiency in Ontario, and the LCOE I estimated of available but not utilized cheap supply. I've added trend-lines to emphasize that while I find the cost of efficiency was higher than foregone supply until 2015, the claimed LCOE has dropped quicker and appears cheaper than the foregone supply in recent years. I'll need to cover a lot of ground before arriving at a place to explain why that is. 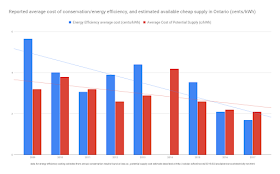 Ontario's Minister of Energy, Northern Development and Mines (a.k.a. Energy) announced actions addressing electricity sector costs on Thursday. I summarized points from viewing the Minister announce the changes on Twitter:

While I was initially underwhelmed by the changes described by the Minister, having now reviewed the extensive material posted due to yesterday's announced changes I need to correct the misinformation I posted, and be more appreciative of some of the other changes.

The main news release is titled, Ford Government Taking Bold Action to Fix Hydro Mess, and it shows I misinterpreted action on conservation as simply moving costs from ratepayers to taxpayers:

The savings referred to are either efficiencies, in uploading programs from local distribution companies (LDC's) to the system operator (IESO), or program revisions. This is much clearer in reading a Ministerial Directives delivered to the IESO
Scott Luft at 8:25 AM No comments:
Share

Comments on the original graphic included thoughts from the "electrify everything" perspective. I responded with too much caution, noting shrinking supply. Having given topic some more thought, I've added dumped exports as supply that has been available to Ontarians over the past years, on top of curtailed potential supply and under-utilized gas generators. In this post I hope to provide some context to the graphic, and show why coming changes in supply don't present a challenge for meeting Ontario's annual electricity needs, if not its capacity requirements.

While I'll try to prevent this post from sliding into an abyss of Ontario electricity statistics, I'll be citing provincial data as the basis for discussion about public understanding being restricted by the presentation of data from official sources, and present new views of generally unreported data that would benefit literacy in valuations of electricity sources - an area where reckless ignorance blooms again and again.
but enough about academics, let's dive in!

The old standard of valuing generation sources is the Levelized Cost of Electricity (LCOE ). I was particularly pleased in late 2015 when a report from Ontario's Auditor General included a figure (5) indicating the cost and quantity of energy sources for 2014. I was more pleased a few years later when I received figures from a freedom of information (FOI) request with the same information for years 2007-2015. While I think the data is terrific, when I wrote about it I cautioned on presenting LCOE, "stressing these calculations deserve a big asterisk and lengthy footnote on the impacts of things such as curtailment and capacity payments."

I have now done the data work required to add that lengthy footnote on curtailment and capacity payments.

I am certainly not unique in hoping for superior valuation tools to LCOE: the U.S. Energy Information Administration (EIA) has developed a  Levelized Avoided Cost of Electricity (LACE) metric, and the International Energy Agency (IEA) a Value-Adjusted Levelized Cost of Electricity (VALCOE - see pg 41). LACE is intended to value the cost (of alternatives) avoided by the generation, with the intent LACE > LCOE would signal a good project. VALCOE attempts to recognize the different capabilities of sources in providing firm capacity and flexibility. The specifics are less important than the principles: not all generation is of equal worth to systems that are intended to minimize loss-of-load situations. Concrete examples of LUEC's limitations will help conceptualize the issues that have people looking for better valuations.

Before I discuss my data I will note one other frequently cited source of Unit Cost in my province (I regard LUEC and LCOE as interchangeable terms): the Ontario regulator. Their most recent explanation of regulated rates includes a table (3) indicating hydro at 6.2 cents per kilowatt-hour, nuclear at 7.7, wind at 15.9, gas at 18.8 and solar at 51.3 c/kWh. I'll show replacing the OEB list's lower cost supply with gas is likely to lower total costs.

I have collected hourly data for the transmission-connected (Tx) generators reported by Ontario's system operator, including imports, and I've estimated (hourly) distribution-connected generation (Dx), curtailed supply, and contracted cost, either by unit generated (or curtailed), or by capacity required to be available. My base union query in working the data has over 16.4 million records. I will not repeat the word "estimate" in this post but simply note this one time it may be applied to everything (my work and the numbers from the IESO and OEB I cite).