A message from 2018 Ontario electricity statistics

Two notable aspects of 2018's electricity numbers in Ontario: average rates did not substantially increase, and demand did. Both of these buck the trend of the past decade. I'll explain how the trends broke.


That should be the most accurate source for this one consumer category, although the IESO did bungle November's rates due to an error in consumption figures (they compensated for it in December by pretending 688.6/8.695= 74.04). In 2017 they bungled June's consumption figures (which was accounted for in July, pretending 913.4/8.858 =112.8). These details demonstrate all IESO figures should probably be treated as estimates too - so I'll stick with my own data work here, and a graphic demonstrating the trends in different consumer segment pricing I developed, and explained in Trends in Ontario Electricity rates by Consumer Segments 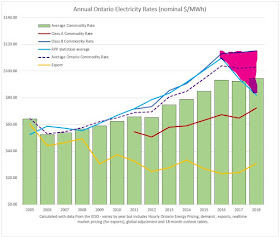 I've marred my work with pink highlighting in order to illustrate the un[Fair Hydro Plan] impact/cost. This may be pertinent to increase in demand - so it deserves a brief explanation. The Regulated Price Plan (RPP) rate has historically been a forecast of the Class B rate (with a variance tracked and compensated for in future rates). The graph shows the rates move similar until the introduction of the [un]Fair Hydro Plan midway through 2017. The [un]fair plan was to transfer about $2.5 billion a year to future ratepayers - and the IESO reports it did. A point of interest: the documents setting the $82 RPP rate forecast the non-adjusted (Class B) rate would be $126.37/MWh, which is about $11 higher than it's been. Intuitively I feel a $33/MWh subsidy should require less dumping of costs on the future than the planned $44/MWh subsidy. I could be wrong, but I don't trust the people who can only calculate a rate correctly 10 times every 12 attempts to be right. Maybe an auditor can explain it to me - and the rest of the province.

More electricity was consumed in Ontario in 2018 than in 2017. The IESO put the increase in context quite nicely in a brief update:


Ontario’s demand for electricity over the course of the year returned to the flat trend observed over the last 10 years, after a deviation in 2017, caused by mild and wet weather resulting in lower demand. 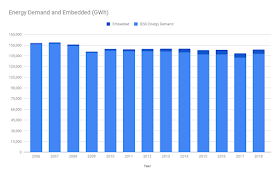 In reporting throughout 2018 I hadn't noticed the IESO being quite so elegant as I was looking for references to price in relation to demand. Here's a section from their latest Reliability Outlook on the role of price in their demand forecasting:


Load modifiers include energy efficiency (energy-efficiency programs, codes and standards, and fuel switching), rate structures (time-of-use and Industrial Conservation Initiative) and embedded generation. The load modifiers are incorporated into the demand forecast. Each impacts demand differently – in terms of level and timing – but all have the net effect of reducing the amount of grid-supplied electricity.

I doubt reducing the Regulated Price Plan for electricity by 40% would "have the net effect of reducing the amount" as predicted of all pricing actions by the IESO. We don't know the effect the [un]Fair Hydro Plan did have on consumption by Regulated Price Plan consumers because the regulator (the Ontario Energy Board) stopped reporting on that consumption with the introduction of the [un]fair plan discounting the price heavily. It strikes me as strange that a plan to rob $2.5 billion each year from future ratepayers isn't considered relevant as a demand driver.

Regardless - demand was up from 2017 but simply fell back in-line with the stagnant consumption level of the past decade.
The big story is the second consecutive year without significant increase in the average real cost of supply which does break the trend of escalating costs experienced from 2008 to 2016. Why did the trend break?

Real rates didn't increase while demand increased because supply to meet the incremental demand either came from reduced curtailment (2 TWh), increased imports (+1.7 TWh) or increased use of natural gas (+4 TWh). I won't discuss that further in this post aside from noting each of those options is cheaper than "conservation" despite the IESO's dedication to continuing their extraordinary waste under the principle that no supply is cheaper than supply.

I will discuss the reason incremental demand could be met with affordable supply is the flow of expensive supply has slowed significantly in recent years. This is my doing. It took a while. My first blog post was November of 2010, and the blog led to my first Financial Post collaboration with Parker Gallant in July 2011. When that column ran Ontario had contacted 5,721.4 MW of supply from industrial wind turbines, and the Korean Consortium was expected to add significantly more to that number. The next year a review of the feed-in-tariff program stupidly concluded the province was well on its way to contracting 10,700 MW on non-hydro renewables by 2015 and should look at upping that figure.

The latest report show the number for contracted wind has instead fallen to 5,533.4 MW - some 188 MW less than 7 years earlier. Ontario ratepayers are finally seeing some benefit from the work I* have been doing for some time.

I've cleaned up some contract list data (to remove re-contracted sites so as to reflect only new supply when originally contracted). It illustrates the contracting to end coal, in 2005 and 2006, and the recession-era gamble on wind and solar in 2010 and 2011 (for more on that read The cost of ending coal-fired generation, and renewables, in Ontario),

There were different reasons rates average commodity rates did not increase in 2017 and 2018: in 2017 a decrease in demand didn't spike rates (as it usually would in too heavily contracted Ontario) because it was counteracted by the OEB effectively throttling back the public generator's rates while ruminating on a rate application one that eventually yielded great hikes in 2018, which increasing demand managed to mask. The common element is that contracted supply growth entering commercial operation has slowed - after too many years of work towards that goal.

People looking to blame somebody for the renewables' bust are welcome to use my name.