The big deals of the early Christmas shopping season are coming to an end soon, so it’s a little late for advising on purchases, but I have been looking at some product and thought a post on what, and why, might be of interest. Like some - if not many - when I think gifts I think of addressing energy consumption, the new technology of a smarter “internet of things” (IoT), and emissions from energy use. Having served a decade in retail some time ago, I also think of selling as much as buying.

Some background on my electricity consumption history. Our current home uses much less electricity than it did when we arrived a decade-and-a-half ago. I wrote on the house early in 2015 after we’d received natural gas and installed a forced-air furnace and my beloved gas stove. 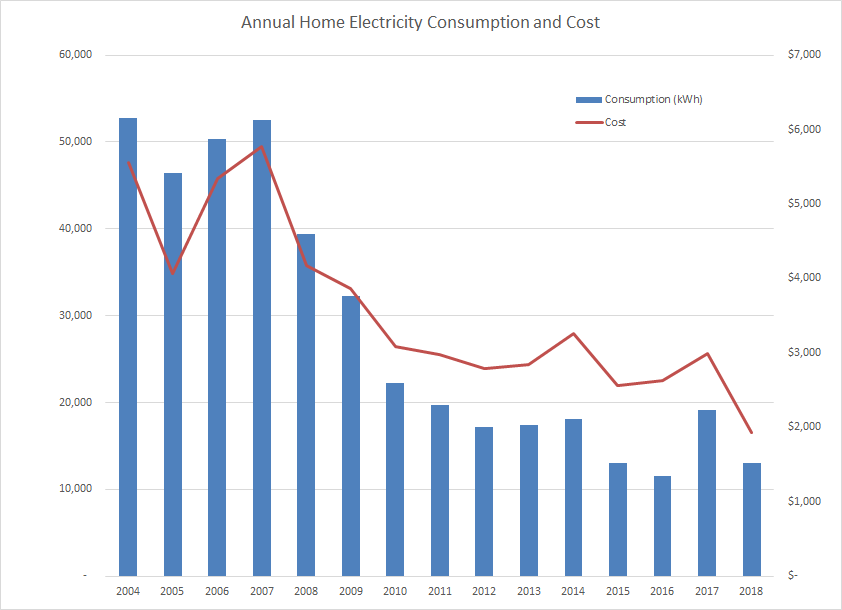 A quick narrative for the chart: from 2004 to 2007 the living space grew considerably (30+%) - efficiency improved although consumption doesn’t show it. Then the wood stove years began (about 3 full cords a years) and more of the house was renovated/insulated. At the end of 2014 gas arrives (we consume 1000-1100 cubic meters a year), and wood consumption is halved. The blip up in 2017 was due to a project by another member of the household (quite a productive one), which ended early this year and consumption is falling back accordingly. Electricity consumption is above the average for Ontario homes, but there may be very few homes at that average as those that heat water with electricity (as I do) are likely above average, and others probably below.

And then there’s cost.

After years of commiserating with other Ontarians it’s never been less, due to the abominable [un]Fair Hydro Plan heavily discounting the price of residential electricity today at the expense of residential electricity consumers in the future. Our house will consume about as much electricity in 2018 as it did in 2015, but pay 25% less. Perhaps this has changed our behaviour. We recently changed the front hallway fixture, with my wife delighting in the nostalgic filament bulbs included with the new product. I can understand why she’d consider a sepia toning, dimmer, light now appropriate for looking at me, and could not work up enough horror at 3 60-watt bulbs in a single fixture to strenuously object.

Perhaps ours is not the only household putting less weight on energy consumption in purchase decisions.

The province’s electricity system operator (IESO) notes demand increases in a recent report, but omits pricing from the factors it cites behind increases. This is strange as there’s lots of chatter across the country about carbon pricing, and its alleged impact on demand. Can cost increases change behaviour without decreased pricing also changing behaviour?

I’ll leave that question for now.

My search for a household energy monitor was inspired by this Andrew Leach graphic from a presentation to a grade 4 class (without implying grade 4 is, or isn’t, my comfort level). 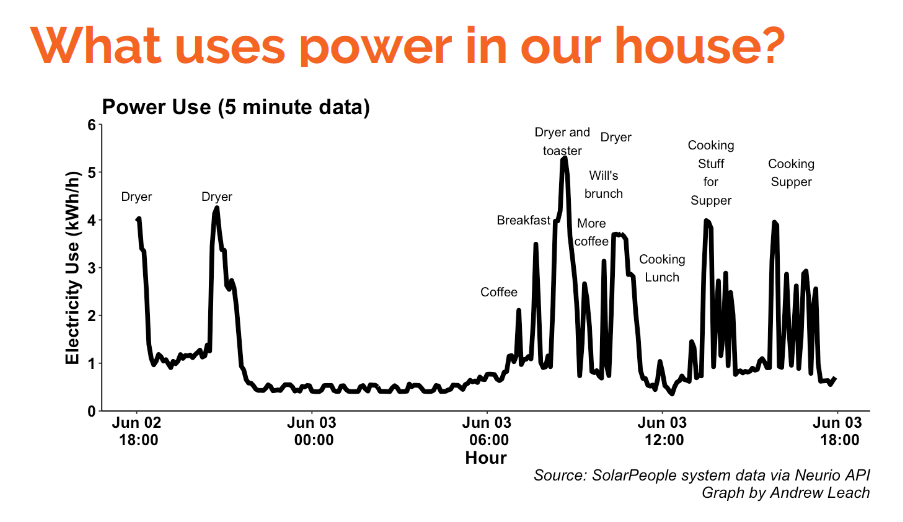 I was attracted by the spikiness of consumption when viewed at a more granular level. The data came from the Neurio Energy Monitor and, I assume, the appliance monitoring analytics. I think this is wondrous stuff: a single measurement, at the panel, provides enough data for analytics to determine what appliance is drawing power - maybe. The monitor is $286 on Amazon (CDN), but comments I found on the web indicate the appliance tracking may not be as robust as one would hope.

The value of the device, and service, is greatly impacted by the quality tracking of device consumption. When I worked with/for my better credentialed brother/boss a phrase used in selling our servicea was “people with better data make better decisions.” My better credentialed sister knows this is not necessarily true - but I’d still like to think it is if only because I manage data.

I also know a little bit about selling.

A competitor of Neurio from south of the border is Sense ($299 USD, but if you buy it today…). The Sense website explains the load signals of different appliances, and connects benefits with features:
A glowing review in Time includes:

...our loud bathroom fan, which sometimes gets left on all day, uses roughly the same amount of power as our microwave (which runs all of eight minutes per day). Our electric heat pump, which I feared made our energy bill soar, isn’t as expensive to run as I thought. And the biggest energy hog in the house isn’t the dryer or dishwasher, which are constantly running to keep our family of four in operation. It’s the hot water heater, which, according to Sense, represents nearly half of our energy usage. A quick look at the tags revealed that our 12-year-old tank is probably due to be replaced sometime in the near future. It’s these kinds of insights that make it truly worthwhile — and economic — to have a smart house.


I’m almost sold - aside from the $300 USD, and because of the Fair Hydro Plan I’ll only get 70% of the savings if I reduce consumption - the future ratepayers will save the other 30%!

A big objection to the purchase must be that nothing is actually controlled - it’s a passive monitor of electricity draw collecting a wealth of data to, optimistically, facilitate better decisions.

There is a cheaper method to collect data on regular devices. I recently purchased a pair of smart plugs (about $25 CDN on sale). I haven’t seen a 220 volt version but I’d snap it up for the hot water tank if it was comparably priced, because these are pretty neat little gadgets. I’m using them to measure usage for devices and intend to shuttle them around each month - this month it’s one on the fridge and another on my main workstation. The fridge is about 20 years old, and if the plug is accurate will consume about 800 kWh over 12 months, which is a little high but at the 12.5 cents/kWh the rate should it’s only costing about $25 a year more than a comparably sized new model. The computer I leave on 24X7 (to bring the world 8 updates a day estimating supply curtailed in Ontario, and much more), and looks like that costs about $4 a month (with monitor and peripherals).

Maybe it would be better to just concentrate on the big consumer which is the hot water tank. This post was inspired, in part, by a Linkedin question, “What's topping your holiday shopping list?“ It mentioned a product called Aquanta. The device attaches to most hot water heaters, and apparently is capable of cycling on and off the power through which it can control water temperature. Again there is an app, usage can be tracked and “smart” routines allowed to reduce consumption automatically. Additionally an opportunity for participation in demand response programming is opened up. All for $149 USD.

I do have objections/reservations. Some equipment, particularly dishwashers, require water sufficiently hot to activate detergents (and work harder if the input is not hot enough), and many people do not have ordinary schedules to their days (such as shift workers, and me). Then there’s simply preference and freedom, sometimes you don’t know how long a shower you’ll take, or how hot you’ll want it.

While Aquanta does present an option for people to add a device to their existing hot water tank, perhaps better tanks are an option. One tank that was mentioned in the Linkedin discussion was Mixergy - which mixes the offer of faster heating and utilizing water heaters for energy storage:

By exploiting thermal stratification and advances in controls and sensing technologies, Mixergy have developed an arrangement whereby we can ‘float’ hot water on top of cold and grow the volume as required inside the tank. This reduces heat losses significantly and means that we can reheat to a useable temperature up to 5X faster.

I won’t go down the road of replacement tanks, or tankless, beyond mentioning Mixergy only to contrast it with water tanks of old I’ve heard tell of. Way back in time in Toronto, even before the first Pickering nuclear units entered service, houses had a fixed rate circuit as well as a metered one. Water tanks had wiring to an element from the fixed rate circuit, and another element wired from the metered connection (to see a remnant of flat rates see page 10 here). There’s a perception excess supply only occurs overnight and that it is due to Ontario’s large nuclear supply component, but neither is entirely true. Before nuclear, there was flat rate service to smooth demand, and recently we are seeing supply curtailment mid-day. Regardless, before we had “smart” branding we had a way to give away excess supply to residential consumers - using their hot water tanks. I am looking for something similar in the era promising an internet of things and smart grids.

Not finding the desired engineered product, perhaps the best option is to invest in the production of a new engineer (approximately $100K).
...
of maybe I should give Sense another look.
Scott Luft at 5:52 PM
Share