I was recently asked why I claim there are transmission constraints on electricity generation from Ontario Power Generation (OPG) Niagara river system generators.

I’ve written a number of times on production levels and argued the constraints largely because I have consistently found the actual output from OPG’s 5 Niagara system generators less than it could be. There are current reasons to revisit the issue:

I’ll review the annual generation data but acknowledge the lowered generation doesn’t prove a transmission constraint - so I’ll also build a timeline demonstrating increased transmission was deemed necessary a decade ago, and the need must have grown significantly, along with generating capacity in the region, since then.

My curiousity on the topic of foregone generation was piqued in June 2011 by an article in the Buffalo News.[2] The article discussed Canada’s inability to utilize all the water it had rights to in generating electricity on the Niagara river, and OPG's Niagara Tunnel project that was to address that, increasing generation by 1.6 TWh. In March 2013 the tunnel was declared, by OPG, to be in-service.

By 2014 I was utilizing Hourly Generator Output and Capability reporting from Ontario’s system operator (IESO) to collect data on individual generators[3], and U.S. Energy Information Administration (form EIA-923) data for the generators on the U.S. side. The comparisons showed OPG output falling far behind the U.S. generation on the Niagara river[4] - a trend which has since, surprisingly, accelerated. 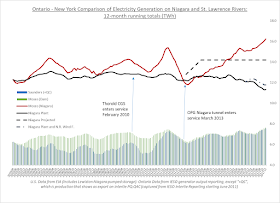 When the output at OPG’s generators did not increase after the Niagara tunnel project completion, I looked for other causes.

It’s likely one reason the June 2011 article attracted my attention was I’d previously cited an article on the stalled transmission line I came to know as the Niagara Reinforcement line. I’ll switch to a timeline of projects to explain why I claim supply out of the Beck generating stations is now constrained.

The story began three and half decades ago:


Preparation for a new Niagara Tunnel commenced over 30 years ago, in 1982, when Ontario Hydro (the predecessor company of OPG) began to study the possible expansion of its hydroelectric facilities on the Niagara River. Detailed engineering, environmental and socioeconomic studies were conducted from 1988 through 1994 with an EA submitted in 1991 for the then planned project consisting of two additional water diversion tunnels, each one capable of conveying 500 m3/s, a three-unit underground generating station with a total capacity of 900 MW, and transmission improvements between Niagara Falls and Hamilton, Ontario. This project was referred to as the Niagara River Hydroelectric Development (“NRHD”).[5]

By the time a project was approved the additional generating capacity had been dropped, and only 1 tunnel was to be constructed. OPG has their annual reports available on their website, and those show the tunnel project commencing in 2005. Hydro One has pulled many of their documents recently, but I previously noted, and screen captured, this from their 2005 Annual Report:


This year, we began a major upgrade of transmission facilities so that even more of the Falls’ awesome power can reach Ontario’s homes and business by the summer of 2006.

That upgrade is the Niagara Reinforcement Line, which has never entered operation.

The system operator has noted, “the project, if completed, would increase the transfer capability from the Niagara region to the rest of the Ontario system by approximately 700 MW."[6]

While the 700 megawatt expansion of the transfer capability never occurred, government entities did contract more supply in the area. The IESO’s Active Generation Contract List (2017 Q3) shows 389 megawatts (MW) contracted in its Niagara zone since 2005, with 375 MW of that having entered service. However, that contract list shows the 230 MW Niagara Region Wind Farm, which straddles the Niagara Relief Line project, as being in the southwest zone.

600 MW of additional capacity have been added to the region since the relief line was planned “so that even more of the Falls’ awesome power can reach Ontario’s homes and business,” and the tunnel project entered service to allow greater output from existing generators.

But generation had remained essentially flat until falling further in 2017.

I continue to claim there are transmission constraints on power from Ontario Power Generation (OPG) Niagara river system generators. I suggest the province walk away from negotiations with those who have scuttled the Niagara Relief Line, but another transmission option should be explored in order to better utilize the generating resources - along with improvements in submersed transmission lines and the lake between the Niagara region and the province's major load centre of Toronto.

I pulled together annual totals for generators in the Niagara system from older sources, including IESO Generator Disclosure reporting from 2003-2007 and Ontario Hydro Statistical Yearbooks from 1954-1992.
Sir Adam Beck II, the main generating station, was officially opened in August of 1954.
The proposed project to add capacity at Beck I would replace old 25 Hertz generators with modern turbines. The drop in output at Beck I, presumably with the end of the 25 Hertz units somewhere between 1992 and 2003, is apparent in the graphic.
Two old generating stations are included in the annual generation up to 1992: the Ontario GS and Toronto GS. A third Generating Station, the Rankine GS, is not. None of the 3 have operated for some time (a presume all were 25 Hertz), with the water rights falling back to OPG. 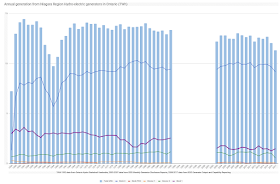 I located data on the U.S., EIA site for the U.S. generators dating back to 1970. The past couple of years have the U.S. side producing electricity at the highest level in decades while the Ontario side is seeing the lowest output in half a century. 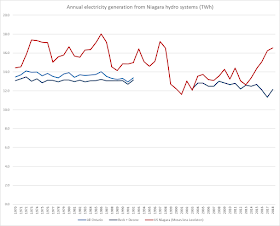 2. I quoted it at the time in What is going on with Niagara hydroelectric generation, and Tom Adams discussed it on his site. The article that was posted to the Buffalo News site, Tunnel will increase Canada's power generation capacity, is currently found at https://maryellentighe.files.wordpress.com/2012/04/mtighe_tunnel.pdf

3. In recent years the IESO posted the data back to the start of 2010. GOC-2010 to GOC-2017 files are currently available at http://ieso.ca/en/power-data/data-directory in the Generator Output and Capability section

4. Graphic and data in spreadsheet at https://goo.gl/uMoiqV

6.  That is from the IESO 18-month outlook released in November 2014 - which likely could be found on the IESO’s current website by a patient, and gifted, searcher.
excel spreadsheet with first graphic
google sheet with second graphic.
Scott Luft at 4:11 PM
Share