Demand in November was very low, but almost identical to demand the previous month. The main electricity rate in Ontario is the Class B commodity rate comprised of the weighted Hourly Ontario Energy Price (HOEP) and the Class B global adjustment rate. It rose 23% from October to November. This makes a comparison of October and November very compelling.

The rate was the highest because data shows Ontario spent more on generation, and whatever else the system's operators felt related to generation, than any previous month. 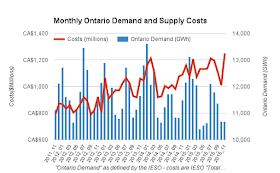 The graph's message is clear: total supply cost is rising. In November, Ontario spent more on electricity supply than ever before, despite demand levels near lows. Note the chart runs 49 months: November 2015 total supply cost is 53% higher than November 2011, while "Ontario Demand", as defined by the IESO, is down.[1] I don't want to dismiss the fact the price increase is seen entirely as a rise in the global adjustment, as that has very important cost implications in distributing system costs disproportionately across consumer segments. One result of growth entirely being in the global adjustment is the rise in the main, Class B, commodity rate is 77% over the 49 months - 24% higher than the increase in total systemic supply costs.

Why did the system's costs rise $240 million from October to November?

During October Ontario's largest 4-unit nuclear power station, Darlington, was out of service as it underwent a vacuum building outage. Most Darlington units returned to service as November started. The months provide a clear comparison of Ontario without 3000+ megawatts of nuclear capacity. Overall, I estimate nuclear generation costs to consumers up over $150 million from October to November. 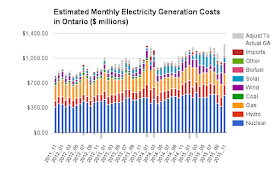 I estimate all other costs down - unlike the IESO. In the chart the variance between my estimates of supply costs and the IESO's reporting of total global adjustment costs is shown as "Adjust To Actual GA." There are lots of reasons the variance should exist even when estimates are perfect, but I must admit I'm puzzled by how the IESO pushed the global adjustment as high as they did in November. [2]

Regardless, with an increase in nuclear pushing the monthly price up one might get the idea the Pickering Nuclear Station, with it's ~3,000 megawatt capacity, should be closed as soon as possible. I believe that's precisely the thought the growth in wind and solar generation is supposed to encourage.

Oversupply of electricity? Then why are we extending the life of Pickering Nuclear? CC #onpoli @blissblogs
— George Smitherman (@G_Smitherman) July 3, 2013

That tweet came from the man who was the Minister of Energy for the period of these events described in the Auditor's General's recent Report:


Expensive wind and solar energy—We calculate that electricity consumers have had to pay $9.2 billion (the IESO calculates this amount to be closer to $5.3 billion, in order to reflect the time value of money) more for renewables over the 20-year contract terms under the Ministry’s current guaranteed-price renewable program than they would have paid under the previous program. Before 2009, Ontario already had several successful procurement programs for renewable energy that achieved renewable generation targets in record time. Nevertheless, in 2009 the Ministry directed the OPA to create a new guaranteed-price program that offered significantly more attractive contract prices to generators. 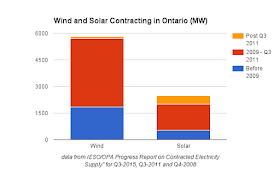 The introduction of the Green Energy Act came from a period of influence of a group best described as anti-nuclear.


If there was a pivotal moment, it came on a hot day in June 2008, at a meeting in Premier Dalton McGuinty’s office at Queen’s Park.
A worldwide conference on wind power was under way in Kingston. Featured speakers were Dr. Hermann Scheer — a German politician and renewable energy evangelist — and Canadian environmentalist David Suzuki.
Suzuki, who had met McGuinty years earlier and persuaded him to push green energy, had managed to get some time with the premier to introduce him to Scheer.
Also at the meeting was newly appointed energy minister George Smitherman, who was also scheduled to speak at the wind conference. Smitherman recollects that Dr. Rick Smith of Environmental Defence and York University professor Jose Etcheverry were also on hand.
Scheer did most of the talking...

George Smitherman and his boss ripped many billions from Ontario ratepayers to play in a fringe German politician's fantasy. Between the end of 2008 and the final quarter of 2011, Ontario contracted well over half of the wind and solar generating capacity it ever has

Ontario's Green Energy Act is not about providing electricity nor about global warming. There was no business plan in terms of electricity supply, and there was no emissions planning in terms of battling climate change. Germany's renewables program, copied stupidly in Ontario, has been about opposing nuclear power.
Wind and nuclear energy are fundamentally incompatible. Hermann Scheer knew it; Sigmar Gabriel (Germany's current Energy Minister) has stated it.

Now the Smitherman/McGuinty plan is come to fruition. Ontario is now in a position where it has far too much supply in the shoulder seasons. While 2015's November was the most expensive month, the next most expensive were April and May, and those were both lower costs than might be expected as Ontario's second largest 4-unit generating station, Bruce B, underwent a vacuum building outage covering portions of both those months.

Reduced nuclear output in 2015, due to the vacuum building outages, does have a cost in emissions, as gas-fired generation has increased in 2015. 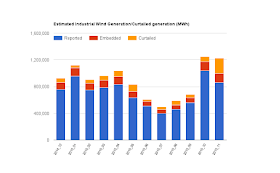 Looking for reasons to keep Pickering operating is a battle against what has essentially been the economic sabotage of Ontario's electricity sector.

Before making a decision on Pickering's future, a responsible government would have to recognize the low value of the wind and solar supply it contracted. Northern locations such as Ontario have peak energy demand in the darkest hours of winter, when the coldest colds are often in the stillest of weather systems. Peak electricity demand in Ontario has been, most years, on hot summer days - wind being generally weak through that entire season.

The current Ontario government chose to sidestep the unpleasant responsibility of  dealing with supply mix incompatibilities in a 2013 Long-Term Energy Plan (LTEP) which featured the message "Conservation First." November's huge rate is due entirely due to contracted supply - supply I've shown was contracted years ago. I suspect the end cost would have been the same even if demand was 20% higher.
A "thought first" plan would be more courageous than the "conservation first" distraction.[3]

Perhaps Pickering's premature closure will be required to control costs, but it seems to me it would make sense to take action to first prematurely end the contracts of the most expensive and least valuable supply. In November wind, with an average cost of ~$130 per megawatt-hour (MWh) had a market value of about $4. Nuclear was valued over twice that, and cost half as much. Solar costs well over $400/MWh making its higher market value, of around $13, less than impressive. Ontario's market is extraordinarily weak, but still strong enough to identify what is most valuable (dispatchable supply, such as from natural gas plants), and what is least (wind). Intermittency is a big challenge because without Pickering, Ontario cannot meet requirements for supply buffers in the summer, and probably not the winter either.

Regardless of what is done to control electricity costs, it's going to require somebody lose.

[1] The IESO's "Ontario Demand" is actually a measure of supply from IESO market participants, which are basically generators connected to the transmission system. This is an increasingly poor measure of demand due to embedded generators however the reason consumption by consumers is distorted also means the simply estimation method I use would underestimate costs as distribution connected generators increase.

[3] The hampering of thought by "conservation first" messaging was apparent again this past week in announcements from the system operator. From the 18 Month Outlook From July 2015 to December 2016:


In May 2015, the IESO signed a 500 MW seasonal firm capacity sharing agreement with Hydro Quebec Energy Marketing ...with Ontario supplying 500 MW of capacity to Quebec for the next two winter seasons. The capacity will be shared “like for like” with no monetary exchange, allowing Quebec to import up to 500 MW in winter months, and Ontario to import up to 500 MW in summer months.


While the IESO has the option to call on up to 500 MW of capacity from Quebec for summer seasons, no request was made for the summer of 2016.

Free capacity not need, but also from the IESO:


Ontario's Independent Electricity System Operator (IESO) today announced the results of the December 2 and 3 demand response (DR) auction, a competitive process through which demand-side resources were selected to be available to reduce their electricity consumption, as needed, during the summer of 2016 and winter of 2016/17...
The clearing price for the summer commitment period is $378.21/MW-day...

Conservation first apparently means we pay for not-generation capacity over not paying for generating capacity from elsewhere.