Ontario is the sucker of first choice for off-price electricity

A large and  growing amount of electricity is exported out of Ontario at prices far below what Ontario's common ratepayers pay. How this happens is complicated, but the reason it happens is not: influential groups of people benefit. In the parlance of Ontario's electricity scam, these influential people are called "stakeholders." This post is about one aspect of a system designed solely for stakeholders.

I've been writing on the costs of exports for over 4 years, primarily focused on analysis of data I've captured and/or queried. I've not been particularly entertained by doing it for about 4 years. January 2015 saw a record for net exports (exports less imports), and in the past it wouldn't have taken me long to run up a blog post saying so. In this post I'll use numbers, primarily on exports, to tell a story of influential people, and their suckers.

Maybe I'll get you to want a tax.

I've revisited data from the National Energy Board (NEB), and connecting figures uncovered there to previous work I've done, I'll explain an obscure but apparently growing profit centre designed into the IESO's operation of an electricity market.

The simultaneous purchase and sale of an asset in order to profit from a difference in the price. It is a trade that profits by exploiting price differences of identical or similar financial instruments, on different markets...

The IESO does not attempt to recover the full cost of supply in operating their market. In January maybe 38% of the costs of providing supply were recovered by selling at market rates, and that was better than they do most months.[1] 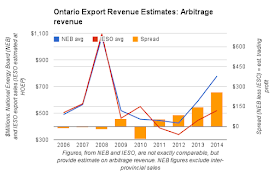 Data is never perfect, and the data sets compared in this chart are no exception. There are important differences between the National Energy Board (NEB) data and the data from the operator of Ontario's gamed electricity market (the IESO). The differences most likely mean the chart underestimates traders' sales revenue from exports.

Ontario does not sell energy to New York or Michigan: within Ontario electricity is purchased by participant in the IESO's market. From an Overview of the IESO-Administered Markets:


Wholesalers buy energy on the wholesale market...Exporters export electricity from Ontario into these neighbouring jurisdictions.

Sales out of the country require documentation be filed with the National Energy Board (NEB).

It is the wholesaler purchasing the electricity in the IESO market that makes the sale.

It is the wholesaler purchasing the electricity in the IESO market that makes the money. There are groups benefiting from purchasing cheap power in Ontario's intentionally depressed market and selling it for more elsewhere.

The NEB data reports on the end destination of foreign sales by exporters, which need not be the jurisdiction sharing a grid intertie with Ontario. NEB sales exceed the amount of electricity that moves into the United States through Ontario's interties with the U.S., meaning much of the electricity Ontario flows into Quebec is wheeled through to U.S. destinations. This means that the NEB revenues underestimate the end consumer value of Ontario's exports as they don't include electrons exported to service end consumers in other provinces - despite growing increasingly higher than the IESO valuation of the exported power.

The IESO valuation of exports requires estimation, because the IESO no longer releases monthly totals on revenue from exports [2]. In the summer of 2013, the head of the IESO was claiming all revenues as profits:


Over the past six or seven years, Ontario has beefed up its electricity exports and made $5-$6 billion selling excess electricity, says IESO President and CEO Bruce Campbell.

Months into this statement being challenged, Steve Paikin confirmed that statement was "an error", and the $5-$6 billion was a revenue figure in line with my own estimates.

January 2015 indicates Ontario is a major exporter not only when it must dump surplus capacity - although during the shoulder season's that is the case.

To demonstrate why Ontario had record net exports in high-demand January, a sketch of how the market should work is necessary. Theoretically, all previously contracted supply should bid into the IESO market at low, or even negative rates, to ensure it gets dispatched [3]; only when those supplies are exhausted would the market accept bids from generators that have significant fuel costs. Frequently, these generators will be a group of natural-gas fired units contracted since 2004 on net revenue requirement (NRR) contracts. The contracts are reportedly structured to pay the facilities to be prepared to generate, but the vast majority of any profits made by doing so are to flow back to Ontarians (via the OPA when it existed - now the IESO). Effectively, when demand is high enough that the NRR generators run, the marginal supply should be these NRR generators, and there's very little incentive for that price to be set much beyond the price of the natural gas fuel. There are a number of implication of this, the two most important to this post are that if the NRR plants are operating, they are the supply on the margin (highest price), and related, if these units are operating and Ontario is a net exporter, the units are operating to service wholesalers purchasing electricity for export to higher priced markets. [4]

In January, these assumptions mean that of 1.275 terawatt-hours (TWh) generated by the NRR sites, 1.03 TWh would be considered as being generated for export markets.[5] This makes December far different than October, when the NRR units rarely operated. While in October most exports were due to dumping purchases made due to contracts at much, much higher rates, 58% of January's 1.785 TWh of net exports were sold to wholesalers at around the cost of the fuel. This may sound like good news: the incremental cost of wind under feed-in tariff (FIT) contracts is $135, so selling it at $45 feels like a loss while here we sell at $45 something we pay $41 for. However, Ontario ratepayers likely pay close to $800 million a year to cover the capital and operational costs (plus a return on investment deemed reasonable) under the net revenue requirement (NRR) contracts. The IESO doesn't even attempt to structure their market to recover these costs. 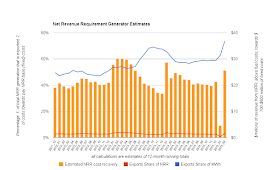 My analysis shows the natural gas-fired powered plants Ontario procured with NRR contracts generate about 60% of their output for exports, but cost recoveries, above fuel costs, cover about 3% of the base NRR contract costs.

This is a pittance.
This is why Ontario set a record for net exports in January - one it will likely break in February an an hourly average basis.Natural gas-fired generation where the bulk of the cost is embedded in the Ontario's ratepayers charge regardless of market price.

This is why the opportunity for arbitrage profits is great.

Ontario's export of power year round leads to the assumption Ontario loses money on it year round. This is so complicated an issue that I've written specifically on a number of ways to estimate Ontario's losses on electricity exports. The large arbitrage margin indicated for 2014 demonstrates the IESO's scheme is not maximizing the value of the generation Ontarians are forced to purchase - or, more accurately for this post, it is not attempting to add value to the generating capacity Ontarians are forced to purchase.

I've suggested recovering a far greater share of capacity costs through the implementation of a carbon tax within the electricity sector, and the start of 2015 has demonstrated I've been correct from a standpoint of generating value for end consumers.


1. The IESO's January reporting shows an "average export schedule" of 2747 MW  (megawatts), an "average import schedule" for the month of 348 MW, and an "average net intertie schedule" of 2,399 MW. It is not without relevance that if you tallied up the month's Intertie Schedule and Flow Report to calculate the average "net" export, this is not the figure you'd get (2,566 MW is), but I will leave the meaning in the difference for another day, aside from citing it as an instance of poor data discipline.
2,399 MW more electricity exported than imported every hour means 1,785,240 megawatts for the month. This is 13.6% of the IESO's reported "Ontario Demand".
The Hourly Ontario Energy Price (HOEP) is shown as having a weighted average of $29.55/MWh (everybody presumably pays this). This makes the market value of electricity "demanded" in Ontario $388 million, The global adjustment reflects the price of supply the market failed to recover: it was $628.2 million - meaning the IESO's market recovered only 38% of the cost of supply.

In the first year of the global adjustment mechanism, which provides the IESO a tool to recover supply costs outside of the market performance, the market pricing recovered about 100% of total supply costs. After years of abuse, it's now under 40% more often than not: 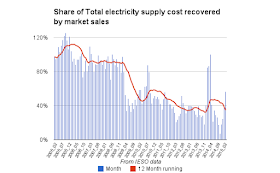 2. Here's one piece of evidence that the IESO did once release revenue figures on export sales: September 2012 Ontario Electricity Exports Bulletin. Note the dead link listed under "Additional Resources": Learn more about Ontario’s electricity imports and exports. My recollection is the figures were usually ~10% higher than my estimation at HOEP which both encouraged me that my estimates were not too far off, and confirmed the IESO could present the figures.

3. The highest accepted bid into the market should set the market clearing price (MCP) - and the HOEP is the average of the 12 5-minute  MCP's in an hour. Any generator that must be accepted regardless bids extremely low (their rates being guaranteed anyway). Functionally, this is why gas should be the supply on the margin (setting the price).

4. Data supports these assumptions. I've queried the data to estimate the fuel cost at a number of heat rates and costed that based on some daily prices from the Union Dawn hub, which is the most significant natural gas pricing in the province. Some quick calculations show that HOEP does somewhat match the fuel cost of production using natural gas, but the fewer hours the gas plants run in a month the less the prices are aligned, with the HOEP moving lower: 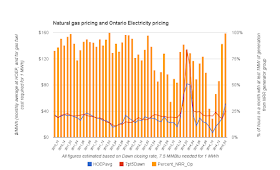 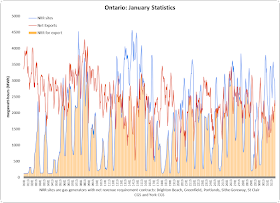 The spreadsheet with the first graph (the "arbitrage" tab) is here
Scott Luft at 9:20 PM
Share