There's never been a worse time for this Conservation thing

As the clock struck midnight with the arrival of November, my hourly rate for electricity went up 7.5%[2], while the rate for export customers was around 1/10th of the residential rate in Ontario, and over 20% of Ontario's generation was being gifted away at those low, low prices.


“There’s never a wrong time to do the right thing ...” - Dalton McGuinty

The current Premier would appear to be trying to take a page out of her predecessor's book of wisdom (a page with 10 words), as her administration seems to have turned the entire public service to promoting "conservation" regardless of the circumstance (abundance).  In a simpleton's world of good and bad, conservation is portrayed as the very best regardless.

Conservation may be, but the conservation the government's agencies are spending their time, and our money, promoting won't conserve energy this winter.

In a recent Twitter Campaign on "phantom power" Ontario's Ministry of Energy found these messages important to communicate: 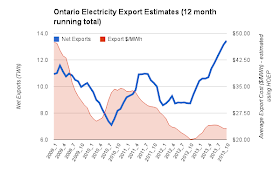 Regardless of the moral righteousness of conservation programming in general, I got the feeling Ministry wasn't really aware of how phantom power wastes "energy".


@OntMinEnergy If you had to pick the worst time of year to address phantom power, would it not be the now - as heating season starts?
— Scott Luft (@ScottLuft) October 29, 2013

The "phantom" electricity produces heat, and we, in Ontario, are now entering 6 months of heating.   Energy won't be conserved by unplugging your toaster; electricity will be conserved and, in most houses, it will be replaced with natural gas heating (or oil ... or propane ...).

Substitution is not conservation.

Meh... It's a ministry and political games are expected.

But why would the nominally independent provincially owned utility, Hydro One, participate in this nonsense?
Hydro One is selling gas - because government requires them to do so.

Throughout October 2013 Ontario was, on average, a net exporter of over 1,400,000 kilowatts of electricity - over the past 12 months the average is over 1,500,000 kilowatts.  Put in news release electricity units, Ontario averages electricity exports enough to power over 1.25 million homes. [3]

Ontario provides power to those over 1.25 million foreign homes at prices stuck well below 3 cents per kilowatt hour ($30/MWh), which is the price the Ontario Power Authority (OPA) claimed it had been spending on conservation.

As I do most months, I again received an advertisement from my utility, and the OPA, enticing the owners of central air conditioning (not me) to participate in peak-saver plus - a program that will provide the customer with a smartish home thermostat [4], so that the utility can curtail the electricity draw from your air conditioning when demand requires it.

[1] The Byrds took it from Pete Seeger who got it from the Bible.

[2] Time-of-use off-peak electricity rate.  The rate is set twice a year, and the off-peak rate for the upcoming winter is actually 14% higher than the previous winter's
Ontario Energy Board: Historical Electricity Prices

[3] The "home" may not be the greatest unit of measurement - it's meant to be communicative because people supposedly can associate it better than the watt.
Unfortunately, the purpose of communication is not necessarily to educate:
When the Ontario government released Making Choices: Reviewing Ontario’s Long-Term Energy Plan, it included "Since 2005, Ontario has saved over 1,900 megawatts of power based on the actions of homeowners, business and industry . That is the equivalent of more than 600,000 homes being taken off the grid."
The statement is problematic as Ontario hasn't intentionally accomplished that reduction, and based on 800 kWh per month (here), the number of homes is 1/3rd of what math would put it at (over 1.7 million).
The 1900 megawatts is about half due to large industrial "conservation" (aka closing/leaving)
another chunk of it is due to extremely expensive "embedded" generation - because nobody in Ontario releases information on how much this largely solar component, it's reported as reduced demand, instead of reporting as increased, and extraodinarily expensive, production.

[4] Not the Nest product people want.