The output of industrial wind turbines hit an hourly high yesterday, according to data from the system operator  - the day produced the 12 highest hourly generation totals 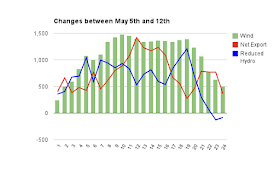 In a recent post I noted issues from the previous weekend; a quick comparison of the changes in generation, and exports, between Sundays May 5th and 12th indicates the impact of the wind production

To compensate for the additional wind generation, the system responded by increasing exports and dumping hydro.


During the earlier portions of the day the combination of decreasing hydroelectric generation and increasing exports far exceeds the increase in wind generation, which is explained by some increased demand [2], as well as an increase in nuclear generation compared to the prior Sunday.

It is apparent that during this day, increased wind that could not be dumped on export markets displaced hydroelectric generation

These record events are notable primarily as milestones along the trail that is the trendline.  The trend in Ontario will be increased dumping, of both water and electricity on external markets - and that will be the trend because of the nature of variable renewable energy supply (vRES).

In The Market Value of Variable Renewables Lion Hirth, writing for Vattenfall, demonstrates the falling value of vRES supply under different scenarios.  Hirth looks at Europe where, unlike in Ontario, apparently wind resource had a positive correlation to demand - so the first wind turbines produced output during periods of higher demand and therefore initially wind production had higher-than-average value.  Hirth measures the value of wind output using a percentage of the average price received on markets for wind output, over a period of time, as a percentage of the average market price over that time. 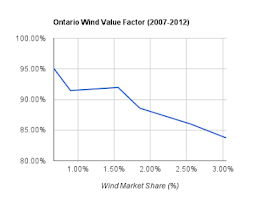 Ontario's market is particularly poorly suited to the introduction of variable renewable energy supply due to a high non-reservoir hydro and nuclear composition that results in a "steep merit-order curve" (see Hirth Figure 7 re: France)

I've pulled annual figures for wind production, total Ontario production, average rate (HOEP) for wind output and the average annual HOEP to produce measurements, comparable to those in the Hirth study, for Ontario.

The value of wind production in Ontario is eroding rapidly.

[1] This is only the production on the IESO's radar, and does not include the 'embedded' wind generation, which would likely add another ~15% to the wind total.
Embedded generation is shown as decreased demand in the IESO's inadequate reporting.

[2] Ontario demand is reported by the IESO in a format available to the public only on Friday afternoons - in order to compare using the same data sets, the "ON Demand" in this exercise is the sum of the generation in the IESO's Output & Capability Report plus the import/export totals from the intertie reports (these do not match perfectly to the weekly IESO's historical data files - for known reasons I won't cover here)
Scott Luft at 11:29 AM
Share