The IESO's second estimates for November put the global adjustment rate at $55.68/MWh for November, which is more than double the weighted average HOEP rate of approximately $26.52.

November saw new rates for customers under the OEBs Regulated Pricing Plans (RPP) that should average $79.32/MWh, so November's charges, if not adjusted downwards, would reverse the summer's trend where customers with RPP rates paid more than customers without them - business exposed the the commodity charge (HOEP + GA) will see rates rise almost 14% from November 2011.

One month ago I wrote that the IESO's month-end global adjustment estimate looked low:


They'll need to revise upward their estimate of $542 million by close to 10% if the final ends close to my estimate of  $585 million. 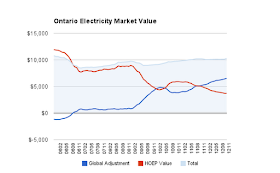 They did not.  The October final was not changed significantly - but now November's $588.2 million estimate exceeds my $531 million estimate by a similar amount.  It looks to me like they've moves the costs forward.  The 12-month total for the global adjustment is now over $6.5 billion dollars as it increases at a quicker pace than anticipated by Ontario's Auditor General in his 2011 Annual Report (pg 94) 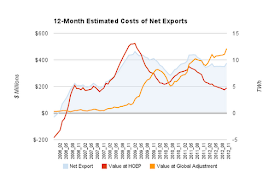 Exports did rise steeply in November, as did nuclear production with the return of 2 Bruce A units.  The increased nuclear output did also result in a decline in coal-fired generation and in gas-fired generation
Wind powered generation was down significantly from both October 2012 and 2011's November - 'wind down/coal down' following the 'wind up/coal up' relationship of the preceding periods.

My estimates on production costs are here
My preliminary monthly reporting,now for November, is here