The big news this week on the Ontario electricity front would have to be Bruce Power synchronizing Unit 1 to the grid after a 15 year absence.


"This achievement by Bruce Power is an important step towards eliminating the use of coal fired electricity by the end of 2014.” – Ontario Minister of Energy Chris Bentley

Replacing coal is a mantra in Ontario now.  It's as if one day the Ministers went to Premier McGuinty and said to him 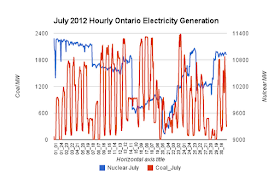 "Premier, teach us to talk to the Press to teach them to perceive intelligence in our energy foibles,"
and the Premier said to them,
When you talk with the press, talk thusly,


"Our actions, which are replacing coal..."


Being genuinely interested in abating carbon emissions, I believe it would be excellent to replace baseload coal plants with nuclear (Alberta), but Ontario does not use it's coal plants as baseload supply; Ontario uses it's coal-fired generators as intermittent, and peaking, power that is withdrawn during low demand hours and ramped up for higher demand periods.  July saw high demand in Ontario and, as the graph shows, nuclear and coal performed much differently - with nuclear output largely dependent on how many reactors were operating, and coal output largely dependent on how many air conditioners were operating.

The traditional spin is that 'clean' natural gas is better mated to both variations in demand and increased variation of required dispatchable generation to compensate for increased renewables.  I've doubted this for a long-time.  One of the first articles on my Cold Air Currents blog was Donald Jones' "More wind means more risk to the Ontario electricity grid" which explained why coal has what Ontario's System Operator (IESO) would probably now call "peaking depth."  This increasingly seems to be a dirty secret of the renewables lobby.

A more recent post on Cold Air Currents noted Germany is currently adding more coal-fired capacity than natural gas capacity - at about a 4:1 ratio.  It sure looked like there was a preference for coal to fit with renewables. 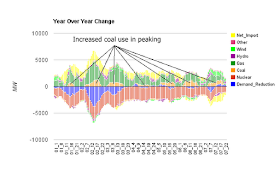 I produce weekly reporting that provides some different views of information than the canned IESO weekly reports.  This week my graphing of the hourly difference in generation, by source fuel, between the week this year, and the same week in the previous year, makes a very strong case that Ontario's dysfunctional market has found coal to be increasingly useful in lower demand seasons - likely because of the peaking depth it provides.

These complex issues could be addressed in the debates that have been occurring in the legislature on a bill (G75) to combine the Ontario Power Authority (OPA), and the Independent Electricity System Operator (IESO); debates I wasted some time reading.   The reason I did was that I stumbled upon a webpage with what I considered a very good contribution to the debate from NDP Timiskaming-Cochrane MPP  John Vanthof.
It was not representative of the quality of the debate.

The debate builds a mythology almost entirely on partisan silliness.  Darlington apparently caused all Ontario debt, Bob Rae insanely cancelled a deal with Manitoba for cheap hydro, there was never any rationale for any OPA planning, Mike Harris sent rates soaring with privatization and shortages caused a big blackout.   All of these things could be argued with a context, but without context they are all unhelpful talking points detrimental to intelligent debate.

Ontario has been dealing with excess supply issues based on disappointing demand for decades.  This is the issue that caused the delays to Darlington during the high interest rate 1980's; that same supply issue resulted in the Manitoba contract cancellation; privatization and de-regulation were in fashion in many jurisdictions late in the 1990's (hardly a specifically Harris, or even necessarily a Conserative, thing).

One of the tabs I have on this blog is "Electricity Planning in Ontario" - which I wrote years ago shortly after starting the blog.  It includes a link to a 2005 OPA article on the history of Power System Planning.  It should be required reading to debaters of  G75 (they might want to add these Empire Club speeches from 1982, 1991, and 1993.  From Maurice Strong in 1993:


In light of our current surplus capacity, which we project will continue for the next 10 years, Ontario Hydro cannot commit to developing new capacity, to extending existing capacity by retubing the Bruce A reactors, or purchasing new supplies from non-utility generators at a time when we don't need the power. To do so would result in unnecessary rate increases at a time when our customers can least afford them.

With planning time frames I think the case is stronger that Maurice Strong had the greatest impact on the supply situation 10 years later.
19 years later Bruce Unit 1 is now synchronzied to the grid, and Bruce Unit 2 should join it in the next quarter.

1500MW of additional nuclear capacity will contribute to surplus baseload generation, although more sensibly than renewables will -  more sensibly because Maurice Strong's de-emphasis on nuclear lead to an enormous increase in the use of coal, which more than doubled by 2000.

But neither nuclear nor renewables are intelligent methods to replace Ontario's non-baseload coal-fired generation.

The debate in the legislature has included claims that all parties have long advocated the phase-out of coal by 2014/15.  The McGuinty government was first elected in 2003 on the promise to phase-out coal by 2007, yet it's still unclear how Ontario will maintain the flexibility of the system without the coal that is planned to be removed in two years, without plans for adequate replacement being communicated.

We are replacing the Jesus Prayer.