Estimating the Costs of Eliminating Coal-fired generation in Ontario

Ontario has had a policy of eliminating coal-fired generation for longer than most Ontarian's remember.  The election of 2003 saw the Liberals promising to eliminate coal by 2007, while the 2 other main parties looked to 2015.   The Liberals won that election, but we are still working towards eliminating coal by 2014.  Every action the government takes on the electricity sector file is sold as a step to replace 'dirty' coal - whether it is referencing wind and solar feed-in tariff (FIT) programs, the contracting of natural gas-fired generation, or the signing of nuclear deals (Bruce 1 and 2 refurbishments).

Recently the allegedly environmental allegedly non-governmental organizations (ENGO's) have been broadcasting that 45% of the global adjustment is due to nuclear (OEB MSP report) - stupidly, or dishonesly, claiming that means 45% of the increase in your bill is due to nuclear.
The value of Ontario's electricity market, for only the commodity (excluding transmission and distribution) is about $10 billion, and whatever amount of that is not collected through market sales, at the Hourly Ontario Energy Price (HOEP), is collected by the global adjustment (GA).  I'll use the global adjustment as a starting point for discussing the cost of Ontario's methodology of replacing coal.

The figures for production are from IESO data, with the exception of solar.  Solar reporting is almost entirely non-existent in Ontario, with the exception of the Ontario Power Authority's quarterly progress reports.  Using those, and a typical output pattern from the London Ontario area, I have estimated solar production.  There are a variety of methods for estimating contract values; for wind and solar it is the first FIT program rates, as the majority of contracts offered for production entering by 2015 were offered under FIT 1.0.

I recently demonstrated a group of natural gas plants is essentially bidding into the market at the price of fuel and capturing profits through a Net Revenue Requirement (NRR).  From the perspective of policies to replace coal, it is notable that the oldest of those plants, Brighton Beach, entered into operation without a contract - the contracts exist due to policies to expedite the elimination of coal facilities while procuring intermittent generation that will minimize the run-time of the natural gas facilities.  The necessity of capacity payments, in the form of NRRs, lead to NRR's for all. 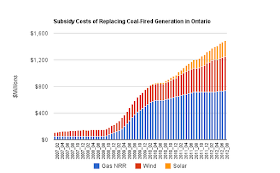 The first graph looks at subsidies as all NRR payments to the ~4630MW of gas generation procured (Ontario had ~7600MW of coal-fired capacity in 2003 and has reduced that to ~3500MW), as well as the costs of actual wind and estimated solar generation (contracted rate less the market, or HOEP, recoveries).  A frequent refrain is that people have exaggerated the impacts on bills of renewables, but including the capacity charges, as natural gas units achieved operational status, the total annual subsidy, defined as payments above HOEP valuation, has moved from ~$100 million early in 2007 to ~1.5 billion today.

Defining the subsidy by the global adjustment amount (variance from HOEP value) means that as the HOEP drops, the subsidy increases - demonstrated in the rapid increase starting, with the recession, late in 2008.  The full brunt of the impact is disguised because much of the public's hydro production (through Ontario Power Generation) is exposed the HOEP pricing; OPG's revenues have dropped partially because supply continued to be contracted as demand collapsed.  Consequently the limited impact on the household electricity bills has been countered by debt retirement charges being halted since 2009 - $1 billion has been collected each year, but the $5.6 billion on 31/3.2009 climbed to $5.8 billion on 31/3/2011. 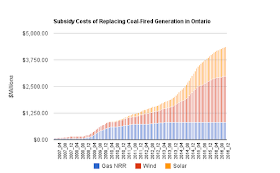 By the end of 2016 (perhaps by 2015) today's ~2000MW of wind capacity, and 500MW of solar capacity, are set to grow to 8000MW and 2700MW, respectively.  If the current levels of the HOEP hold, the 'subsidy' (as defined in the previous paragraph) will rise from ~$1.5 billion to $4.4 billion.  This figure should be low - because the current plans don't actually include appropriate replacement supply for the remaining coal generation capacity. There have been well publicized cancellations of natural gas plants in urban locations - but no coherent alternative plans to replace the planned dispatchable capacity.

Numbers attached to the global adjustment are all corrupted by the low HOEP rate, which is averaging just $25/MWh over the past 12 months.  The HOEP is low for some reasons that are universally true; declining/stagnant demand and very low natural gas pricing.  The HOEP is lower again for some distinctly Ontario ones; a large baseload element, and capacity payments for the gas, and to a lesser extent coal, suppliers that set the price when we don't have excess baseload generation. 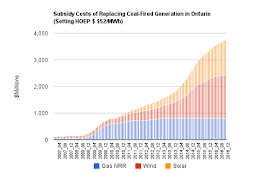 A useful figure in estimating the costs of replacing coal is probably $52/MWh, which is close to the price of coal-fired generation from OPG in 2007/08, before capacity payments kicked into high gear to keep the plants available despite severely curtailed production.  $52/MWh is also pretty close to the base price guaranteed the production from the Bruce B nuclear units.

Forecasting "subsidies" out by defining the subsidy as the price above $52/MWh, instead of $25/MWh, and leaving the natural gas plant NRR subsidy as is, drops the subsidy level down by the end of 2016, but only to ~$3.7 billion dollars.

These estimates are very rough, and indicate future costs based on the costs of old plant, but they are in line with the best forecasts in Ontario, which I've argued are from Bruce Sharp (here in the press, which references the work here).  There is limited utility in improving forecasts because, as the latest IESO forecast again indicated, there is still no plan to adequately replace the remaining coal capacity.

Revisiting the current accusations of subsidy, and using the $52/MWh as a better indicator than the HOEP of $25, the figures change significantly.  There's an important, counter-intuitive, lesson to be learned: Because $52 is the lowest figure for all generation that is not public, the only cost increase to consumers would be due to paying more for OPG's unregulated hydroelectric production (~11.2TWh over the past 12 months).  Consequently, a 105% increase in the market price would create an actual price increase of a little less than 3% - but that entire 3% should be public generator profit used to pay down the existing debt that the nearly $1 billion a year collected by a debt retirement charge is not being used to pay down.

Using the $52/MWh figure also changes the current view of how heavily different generator groups are subsidized.  At a market valuation of $52/MWh, the 3% of all generation that comes from wind would share a similar subsidy sum as the 54% of all generation coming from nuclear sources ~ and the natural gas sources that provide 15% of all supply collect ~42% of all subsidies.

Coal is included in this table, as subsidized, because there is a cost to using less coal than we used in 2007/2008 (only the costs of the fuel itself are not relatively fixed)

The many assumptions required in these estimates can be argued, but it is clear that policies that create an artificially low market price (HOEP) are problematic in multiple ways - most significantly in avoiding dealing with the public debt while transferring wealth to private owners entirely sheltered from market turbulence.