That is $177.3 million less than their preliminary estimate of $599 million, but only $38.4 million less than mine.
With my estimates atop my podium, I'll try to reinforce some lessons using July's commodity pricing (class B) of  $67.10/MWh - which is based on an average market HOEP of $33.51, and the freshly released Class B GA of $33.59
The paradox of the higher market (HOEP) rates accompanying the lowest overall commodity charges has been notable in Ontario for some time - and relates to high demand periods (July 2012 being the highest summer demand since at least 2007).
A quick overview of Ontario's production sources in a low-cost month:

By calculating a rate as the total value of all sales (including exports) at the market rate, adding the $421.7 million global adjustment, and dividing by the total market demand, the average rate for electricity in the market was $61.97 in July - the lowest price since September 2010, but only about $4.13 less than April's $66.10.  On a monthly basis $1.80 - $2.20/MWh of this I estimate as being due to the OPA's consumer demand management programs (CDM).

The difference in the class B rate was much greater than that, at $10.83.  This means that ~40% of the lower price in July is explained by the cost of procuring supply.  Some of the other 60% is attributable to the shifting of costs from large users to smaller ones via the Class A global adjustment mechanism (in April the cost to class B was ~2.95/MWh, in July only ~$1.46); and much of the remainder is the cost to Ontarians of dumping exports (~8.25/MWh in April, and ~$3.35 in July).

All other things being equal, the higher the HOEP, market price, the lower the cost to Ontario's consumers of subsidizing export, and large class A, consumers.

This is why the higher HOEP rate lowers the commodity rate.

The other 40% of the difference in July's lower commodity price is attributable to lower procurement costs.  These are explained by the capacity payments made to natural gas-fired, and coal-fired generators (explained here).  Ontario's electricity market (commodity only) is approximately $10 billion a year.  Of that, my estimates indicate that approximately $1.8 billion is charged regardless of production levels:
For coal, natural gas, and Other/Lennox, the contracts, despite being hidden, are clearly structured so the actual use is generally the cost of the fuel: this means that over the past 7 years the system has been structured so that the more fossil fuels are used in generation, the cheaper the price to consumers will be.

The cheaper July price is therefore not only due to higher market prices (bizarrely), it's also due to the highest production of the year for coal, and the highest ever from natural gas.

Higher July demand also spreads the monthly base fees of $145 million over a greater denominator.

The capacity payments/net revenue requirements, have the additional effect that the marginal cost of production is simply the fuel component for gas and coal producers, reducing the market price.

These contracts are not only responsible for the 40% of the reduction being explained in July by lower procurement costs, but much of the class A and export costs transferred onto consumers is due to low HOEP rates accentuated by capacity payments at all times.

The Class A structure, Time-of-Use (TOU) pricing, and many of the OPA's CDM programs are directed at reducing peak demand, with the explanation that it's cheaper to remove the demand than to build generation to support it.

The ~$1.4 billion in annual capacity payments appear to be recovered from consumers equally across all months, regardless of demand volumes, which I've demonstrated has the outcome of making power cheaper during peak demand periods.

These policies work against each other.
---

Note:  In response to this title it was communicated to me that households where not getting lower pricing, and in fact the prices they pay were not only 10% higher, but is now noted by Statistics Canada that electricity prices were up 3.7% across the country; "Increases in electricity prices in Ontario were the biggest factor in this rise.
An explanation is probably in order.
Regulated Pricing Plans are set in advance of 6 month periods in Ontario, based on forecast of what the actual pricing will be.  The current period is now half way completed, with each month well below the forecast rate.
The difference should be entering a variance account, which would then benefit RPP consumers when the next RPP pricing occurs (November).

I do estimate a variety of prices in my monthly reporting, on my data site, illustrate the difference between class B pricing (which I refer to as "commercial") and the RPP rates ("residential"). 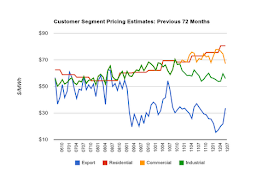