I've had a lull in posting as I am developing some more reporting on my data site to support future blog posts.
Here's a post to indicate how my Weekly reporting demonstrates the supply mix, pricing, and export issues frequently noted on this blog - and increasingly elsewhere.

Weeks 25 and 26 are amongst the highest demand weeks of the year.  Peaks are far higher than in January, but total weekly consumption is yet to surpass week 3.

Summer is now our peak (hourly) demand period, which should raise some supply requirement issues.  During the highest demand week in January, peak demand was ~7000MW above the minimum demand for the week.  During the heat of week 25, demand rose to ~12000MW above the minimum demand for the week (essentially doubling the week's minimum demand).
Ontario has been meeting this demand through exceptional, timely, availability of it's nuclear fleet.  The following graph, for week 26, illustrates increased demand Thursday-Saturday (a negative "demand_reduction"), with the constant increase in production coming from nuclear generation. 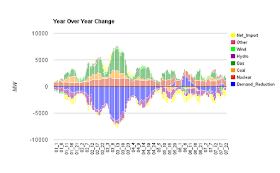 The very significant generation from nuclear is tremendously important in meeting peak demand, but is requiring frequent curtailment activity even during these higher demand weeks.  Bruce B underwent a number of maneuvers last week to curtail generation during the wee small hours as supply outstripped demand by more than we could find other markets to pay to take the excess output: 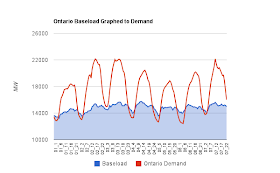 It is not surprising that the surplus generation baseload periods in week 26 experienced some sharply negative pricing. 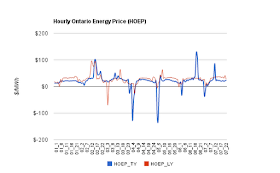 The recent heat has increased demand significantly over 2011, with growth over the two weeks (25 and 26) averaging over 1400MW per hour, but the Hourly Ontario Energy Price continues to trail last year's low levels, with an average price of ~$26/MWh.

For Ontarian's now being charged over $80/MWh for that supply on their regulated price plans, the discomfort of soaring temperatures is exacerbated by subsidizing exports at about a third of their price.
Exports have climbed, on average, 430MW each hour during weeks 25 and 26.
Scott Luft at 1:55 PM
Share