Sir Adam Beck is dead: The Gifts of Nature have been taken from the public

Early in the 20th century, Adam Beck lobbied the Premier, from his position as a Conservative Member of Provincial Parliament, for a commission to investigate the electricity sector.  An advocate of public ownership in the sector, a century later Sir Adam Beck has Ontario's largest hydroelectric facility bearing his name, and his statue sits prominently in Toronto surrounded by iconic structures housing iconic organizations - including Osgood Hell, the Four Seasons Centre for the Performing Arts, and the Bank of Canada.

I hope the iconic institutions surrounding his statue endure better than Beck's legacy has.

My previous two posts have demonstrated the global adjustment mechanism measures the dysfunction of the market, and that large, and increasing, capacity payments are serving to drive down the market price (HOEP).  This post will show how the reduction of the HOEP, and the global adjustment mechanism, have combined to take the benefits of public hydroelectric facilities away from the public, and distribute them to the private entities awarded contracts by the McGuinty government.

Ontario Power Generation (OPG) is the public generator - it is one successor of Ontario Hydro, in turn Ontario Hydro succeeded Sir Adam Beck's Hydro-Electric Power Commission, which had a "Power at Cost" slogan.
OPG's largest hydro-electric generating stations are the Beck generating stations (~2000MW capacity) in the Niagara Plant Group, and the R.H. Saunders (1045MW capacity) generating station on the St. Lawrence river; these are 'regulated' hydro assets, meaning the Ontario Energy Board sets the rates they receive for their production.  The last rate change for regulated hdyroelectric facilities (~60% of OPG's hydro production) was a reduction in rates to approximately 3.5 cents/kWh.

The other 40% of OPG's hydro assets are unregulated; now almost exclusively the generation  exposed to the HOEP/market pricing.  As Ontario approaches an annual bill of almost $2 billion to pay for the availability of natural gas and coal generation, the 2012 2nd quarter reporting from OPG is likely to show that non-regulated public hydroelectric received approximately the same amount per MWh of production ($20) as private natural gas generators receive each hour for each MW of capacity simply to exist. 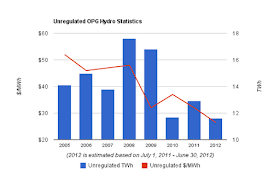 The government's twin actions of continuing to bring generating capacity online as demand declines, and paying capacity charges to distort the market, has destroyed the financial results for OPG's hydroelectric assets.  Before the latest dry spell, there was already evidence in periods of surplus generation it was hydro seeing curtailed purchases, and the HOEP has been declining since Ontario demand peaked in 2005 - but increasingly so with the acceleration in procurement since the Green Energy and Green Economy Act passed (GEA/GEGEA).

Despite the consistent losses, the 2011 annual report for OPG showed owner's equity  increasing by over $1.5 billion since 2008 (the government is the sole shareholder), with long-term debt growing ~$400 million.  This seems nonsensical for an organization that is years away from the last time it showed a real profit.

Public power receives little sympathy in Ontario due to the presence of a debt retirement charge (DRC), of $7/MWh, on consumers' monthly statements.  Ontarian's are told that this charge, which collects about $1 billion annually, is to retire the residual stranded debt (RSD) portion of the debt amassed by the public forerunner to OPG and Hydro One, Ontario Hydro.  The problem with this is that if the stranded debt were being used to pay off the debt that was stranded at the time Ontario Hydro was broken up, it is already paid off.   In May of 2012 the government provided it's first accounting of the residual stranded debt (which the DRC was intended to pay down); the RSD stood at $5.6 billion at the end of March 2009, and rose to $5.8 billion two years later.  The tally at the end of March 2012 is yet to be released, but there is virtually no chance the government's projection of $4.5 billion will be realized as OPG continues to lose money (factoring out the performance of the nuclear funds).  This means there is a billion dollars collected every year that does not fund the stranded debt, or perhaps more accurately, the strand debt charge cannot keep pace with the rate at which debt is becoming stranded.
Meanwhile, private power producers receive 60% more for generating a Watt than OPG does.

Coincidentally - or not - there is about a $1 billion dollar a year difference between what OPG receives for it's hydroelectric output, and the value of that output at the average price paid to suppliers of electricity in Ontario (30.7TWh sold at $31.16/MWh while the average rate for all supply was ~$66/MWh).

The value that is not realized by the public, on the resale of the production from "the gifts of nature," is not servicing the public debt.  Instead it is servicing the costs of private natural gas, wind and solar initiatives - as is approximately $800 million a year of value from the output of OPG's nuclear facilities.

Treating electricity as a commodity, I calculate which generators' production is undervalued, and which are overvalued: all output is sold at approximately $66/MWh - generators paid less than that are net contributors to the global adjustment (undervalued), and those receiving more are beneficiaries (overvalued).

The roadmap for this transfer of wealth from the public generator to private generators was laid out years ago by the Ontario Clean Air Alliance.  In Tax Shift: Eliminating Subsidies and Moving to Full Cost Electricity Pricing they argued that the greatest subsidy in Ontario was "Below-Market Water Royalty Rates" - a rather bankrupt social view compared to that which built Ontario's electricity sector a century earlier on the premise that "the gifts of nature are for the public."

There is little chance things will improve for OPG.  The Ontario Energy Board (OEB) is the regulator that prescribes the rates for OPG, and on April 20th, 2012, they received a report prepared by Power Advisory LLC.

Power Advisory LLC represents many of the largest private producers currently benefiting from the bleeding of OPG - and they do so quite aggressively.   An article appeared in the Toronto Star in May, demeaning OPG's nuclear assets; another in June where former OPA/government contract negotiator Jason Chee-Aloy raised an alarm over the government's lack of enthusiasm for moving forward with contracts for Power Advisory LLC's 'green' energy clients (the system operator is aware that 40% of all contracted output will be generated at hours where output will be driven beyond Ontario's demands).  Mr. Chee-Aloy's lobbying seems to have worked rapidly once he utilized the Toronto Star to broadcast his message, as soon after Ontario's system operator released base pricing levels that will see nuclear generators maneuvered prior to wind turbines, as Power Advisory desired.

With powerful clients and a broad platform to communicate it's propaganda, it is unlikely the OEB could have found a worse consultant to represent the interests of Ontario's consumers than Power Adisory LLC.

In future posts, I'll explore examples of markets that negate the need for much of a regulator's role in meddling with pricing, and revisit pricing models that might be appropriate for Ontario to reverse the downward spiral it is experiencing as affordability deteriorates concurrent with public assets being devalued to the benefit of only a few private entities.