Rising electricity prices in the electricity sector is the topic of a number of Ontario news stories this year;  The Guelph Mercury reported on a couple of manufacturers in the Waterloo with much the same narrative as reports out of the North Bay region earlier in the year.  Increasingly, the Global Adjustment (GA) mechanism, which ensures the money paid to suppliers is fully recovered from ratepayers regardless of market pricing, is portrayed as the reason electricity costs are moving higher in Ontario.


Most of Ontario's supply is subject to contractual payments (or regulated rates), so the lower the market price, the higher the Global Adjustment rates (there are more than one).  As the market HOEP rate drops, customers see the GA rise.  The rising line of a bill is a convenient target for inciting anger.  Groups as disparate as the Ontario PC party, NDP, Green Party, Greenpeace, Environmental Defence have all referenced the charge as a subsidy.  And they aren't the only ones.  Google "the global adjustment subsidy" and you'll find hits to this blog!
Which is somewhat unfortunate.

The GA is a measurement of the dysfunction of Ontario's market - meaning the inability of market price signals to coordinate supply and demand.  Complaining about the Global Adjustment, in itself, is along the same lines as moaning about the use of Celsius degrees or a passionate hatred of those holding onto the yard measurement.
Too hot outside for your liking.  Try using Kelvins.
Better?

The economic basics could not be simpler.  Supply is high because the contractual prices offered by the government, via the Ontario Power Authority, are high, and firm (made on a must take basis of all generation regardless of value/time).

One cost of having high supply includes the need to dump the generation not consumed locally in external markets (as Parker Gallant and I noted in the Financial Post one year ago).

Total market demand is down 10% over that time.  After the math, the average cost of a MWh of power inflated 16.5% in the past 4 years - a price that is kept artificially low due to the abuse of the public asset that is Ontario Power Generation (I'll support that statement in an upcoming column)

The global adjustment could be viewed as contributing to the Class B customer paying 26% more for electricity while the costs for the entire market climbed only 16.5%.   That difference is partially due to the need to recover the difference between what is paid, on average, for supply (about $66) and what is received when sold to export customers (~$26/MWh over the past 12 months).    It's also explained by demoting most Ontarians to class B status, in order to provide Class A status to Ontario's largest users (some of whom it is simply stupid to confer the special status too - unfortunately for our future, the stupid choices for membership in that elite group include universities).


Most Class A customers probably belong to genuine energy-intensive industries that were seeing major job losses as companies relocated (or closed).  The pricing for Class A customers is therefore a response to the same issues as the price for export customers - the price is what can be collected for the product, which must be sold.  The Class B global adjustment, which is included in the regulated price plans for residential and small business customers, reflects the weakness of substantially captive customers.  As such, the tool allows the cost of contracted supply that cannot be collected from non-captive customers to be shifted to captive customers.

While the GA provides a crutch for managing supply poorly, the dialogue around the issue should not centre on the length and shape, or the colour, of the crutch.

The broken leg is the problem. 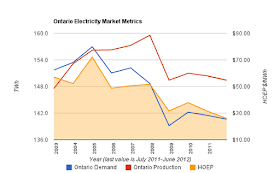 Plunk Ontario Demand into a graph with HOEP on a second axis and ECO 101 textbooks spring to life!

Demand goes down, price goes down.
Supply is not allowed to fall, so price stays down.

Between 2002 and 2005, Bruce Nuclear Units 3 and 4 came online, as did Pickering Units 1 and 4, and the 550MW Brighton Beach Natural Gas facility in Windsor.  All projects were initiated prior to the Liberal government's election in 2003 and there has been no additional generation needed since 2005.  The popular perception that the system was a disaster and was suddenly righted by Liberal actions on the supply side is false.

The demand side is another question, but much of the demand reduction was through the decline of industry.

Ontarians pay the Global Adjustment largely because of procurement policies - those same policies cause the dumping of excess generation in adjacent jurisdictions.    The policies are the issue.


Pretending the structure of the global adjustment is a fundamental problem strikes me as a poor diagnosis made to facilitate the purchase of another 8000MW of capacity, in a period of stagnant demand that seems as likely to lead to another period of decline as it does to increased demand.


The Global Adjustment is perceived as the troubled child of Ontario's electricity sector.
Before forcing the child to change, we should listen to what it is telling us.

This column was instigated by the Council for Clean & Reliable Electricity release of a commentary titled "Putting the Pieces Back Together: "True Pricing" for Ontario Electricity"  The first sentence is:


Most people have surely never heard of the Global Adjustment (GA) mechanism yet it is why Ontario consumers are paying more for electricity than exporters of Ontario power.

If there were no GA, Ontarians would still be dumping excess generation on adjacent markets.  The GA is a measure useful for estimating a price on the dumping.  The terminology is admittedly tricky.  I reference a "cost of exports" in breaking down pricing for Ontario's customers, but it would be more accurate to call it "cost of dumping" or "cost of excess supply".

Ontario has a number of issues causing it to have a lower market price (HOEP) than adjacent markets - but the prices across markets are not entirely dissimilar, and Ontario's pricing power is limited.

The introduction to the CCRE includes, "the GA has been instrumental in meeting the government's objectives..."
True.
That is the problem.

The price signal works on the concept of scarcity - we should not be treating the GA symptom instead of the disease.
In the case of low pricing, the problem is abundance (the government policy).


The CCRE paper's premise I find poor, but there may be use in tinkering to improve the price signal, and I will make that the topic of a future post. 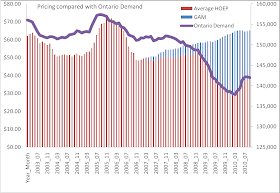 This graph clearly shows that since 2007 the only driver of per watt price increases in Ontario is the contracting of supply at greater expense (note the HOEP does match the demand curve quite closely).