I will comment on the directive, in this blog and anywhere else possible, but the title is directed at the reader. The last section of the directive notes a 45-day period for commenting started November 23rd, and public input is considered. I emphasize this as the Long Term Energy Plan , in Appendix Two, notes 2500 online responses were made as it was being formulated, between Sept 21st and Nov. 18th.
Hopefully the other 2499 responses also helped to tone down the machinations of the handful of people presenting themselves as hundreds of organizations in the Stakeholder sessions (Parker Gallant notes some of the connections between the many groups).

30 years ago I was in a high school chemistry class where the teacher would ask for a characteristic on the element/substance of the day. There was one kid who would invariably raise his hand and begin a sentence with, "It tastes …", which would get cut off each time by the teacher admonishing all not to put the element of the day in their mouths.

Sometimes it is best to compare objects without one attribute being considered. In Ontario's electricity mix, that attribute is CO2 emissions. I consider myself a non-hysterical warmer, but testing this attribute first is clearly clouding the judgment of the current government. In terms of attributes relevant to an efficient supply mix, I'd include ability to meet demand (load following), availability, and cleanliness (ignoring CO2 – but referring to smog).

Nuclear is always on (in reality, and in the LTEP); wind is totally intermittent. Demand is relevant to neither. Demand is also not relevant to solar, but it's production better matches real demand periods. Hydro in Ontario is split. I'd estimate 25% of hydro capacity is always on, the remainder can be load following when available – this summer only about half was available (due to water levels). Natural gas and coal both are used to meet demand, although increasingly about 1000MW of gas seems to be needed 24X7 (that's simply an observation, I don't know if that is a requirement for keeping the grid stable due to wind increasing, or the grid design in general), and coal is now only used for meeting high demand periods.

Here's the 20-year history, by source. I've moved wind to just above hydro, as these are the two that don't follow load at all, and above that is the hydro which follows load for, I'm estimating, 60% of the supply. On one Y axis is the annual production, and on the other on "net imports." It's only 20 years. But the imports, significant in 1990, become huge exports as the amount of supply that does not match demand grows in the early 1990's, recede as nukes are idled later in the 90's, and as idled nukes are reactivated in the latest decade, we again return to high export levels. Conversely, the more load following supply in the mix (coal and gas, along with 60% of the hydro), the closer supply matches demand.


"The June 2006 supply mix directive required that the OPA plan to use the existing base of 7,850 MW of renewable energy (hydroelectric generation) and to double this capacity to 15,700 MW by 2025 including hydroelectric, wind, solar, and bio-energy.

Since then, there have been a number of renewable energy procurements through initiatives such as the Renewable Energy Supply (RES) programs (RES I, II and III), the Renewable Energy Standard Offer Program and the FIT Program. As a result of these successful procurements, as well as the Green Energy Investment Agreement, the additional renewable capacity expected to come into service is greater than the levels envisaged in 2006. Based on forecast assessments of what the system can accommodate, the OPA shall plan for 10,700 MW of renewable energy capacity, excluding hydroelectric, by 2018.

The government will look for opportunities to incorporate additional capacity from renewables into the Plan taking in to consideration the cost-effectiveness for Ontario electricity consumers, planned transmission additions, and electricity demand growth.

It is expected that the Plan shall provide for renewables, excluding hydroelectric, to account for approximately 10-15 per cent of total Ontario electricity generation by 2018."
This is nonsense. Most clearly it has the trick of excluding hydroelectric to make it look like the current government did not abandon cost considerations as it lost control of the procurement process via the the Green Energy Act and poorly conceived FIT offerings (which needed quotas –and to far better protect the public from connection costs). Here is how the previously submitted IPSP answered the call for 'renewable' supply as it was directed by the ministry to "Maximize feasible cost effective contribution from renewable sources":


The OPA's approach to determine the feasible and
15 economic contribution of renewable supply is as follows:
16 • All feasible hydroelectric resources are included on the basis that hydroelectricity is
17 the most economic of the renewable resources;
18 • Bioenergy, wind (small sites) and solar resources were included generally on the
19 basis of the expected response to standard offer procurement programs; and
20 • Large wind sites were used to provide the remaining resources needed to meet the
21 goal. The sites were included on the basis of lowest "all-inclusive unit cost" (in which
22 the cost of associated transmission is included).

Allow me to paraphrase. It was determined to seek out hydro first – because it is useful. The small stuff second because of the expected results from existing programs (a reminder 100000 solar installations was set as a target by the Eves government), and wind last because it was the cheapest way to meet the quota. There was never any indication the quota was intelligent, and there was plenty of indication the value of wind, which is very close to nil, was known. The cheapest 8000 MW is the 8000MW that can't be relied on at any time.

The proposed supply mix calls for more of it apparently solely out of inertia.

I wrote in a previous post about the cost to Ontarians of not matching supply to demand.  I have on my 'to do' list a critical view on time-of-use pricing, and some of the data I've worked with is relevant here. I've noted previously that peak demand reduction programs don't seem to limit the impact to peak demand, as average and minimum consumption drop on a roughly proportional scale. This chart shows the average hourly Ontario consumption since IESO data starts in 2002, by season (the seasons are by month; ie. Dec, Jan. and Feb. are winter). As an aside here, you can see the winter hours between 7 am and 11PM (23), for 14 hours, all exceed the consumption of 'peak' hours in spring and 'fall'. Regardless, on a typical summer day, based on the last 8 years, demand will be about 6000MW higher at one point than it will be at another. We know on extreme days, consumption rose above 25000MW this summer, and, at the other end, dropped to around 10600MW on Easter weekend. 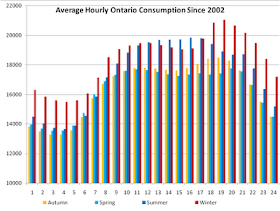 This Long Term Energy Plan contains past, current, and projected figures in Appendix Three on page 63. What it says is by 2030 we plan of having 5000MW less of supply that can follow load, and 9500MW more supply that can't.

Here's some feedback for next October - we need a new government.

I'm not to sure what to say for January – if anything.