7 days after news broke of a lawsuit claiming the global adjustment charge is “an unconstitutional tax, not a valid regulatory charge,” Ontario's electricity system operator (IESO) issued a news release congratulating their generators and certain consumers:


Ontario’s peak demand days typically don’t happen at this time of the year. Yet with hot weather persisting, and in spite of summer’s end last week, the province experienced new annual peaks this week of 21,786 MW on Monday and 21,542 MW on Tuesday.
Generators did their part to help meet the peaks, as well as Ontario’s consumers participating in the Industrial Conservation Initiative (ICI) and other demand response initiatives.
According to preliminary analysis, consumers participating in the ICI are estimated to have reduced peak demand by over 1,500 MW this week. By reducing demand during peak periods, ICI participants can both reduce their electricity costs while helping to defer the need for investments in new electricity infrastructure that may otherwise be needed. 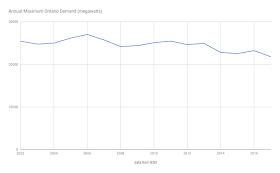 Jeff Zochodne reports that a,


August lawsuit filed by National Steel Car (NSC) believes the revenue the IESO collects for the global adjustment, from the company “and others,” should be declared “an unconstitutional tax, not a valid regulatory charge.”
The company gives numerous reasons, including that the global adjustment allegedly “redistributes wealth from the consumers of electricity in Ontario to, among others, the generators of renewable electricity.”

I don't like their chances, partially because I doubt the quality of Ontario's courts, but I will discuss reasons the lawsuit has a chance at succeeding to demonstrate the need for changes in Ontario's too pliable electricity pricing structures.:

The global adjustment mechanism being challenged was introduced in 2005 to ensure the full costs of electricity supply were paid by consumers of electricity (Section 25.33 (1) of the Electricity Act 1998) - it was intended to be the difference between what suppliers were paid through contracts (or regulated prices) and what the market valued supply at. In half of the first 26 months of the global adjustment the line item was a credit on consumer bills, but it's been a charge in all but one month since 2008.
Scott Luft at 12:20 PM No comments:
Share

Mississauga South's C. Sousa, announced what the government was not doing the other day.


“We are not encouraging the consumption of cannabis. That would be a mistake.”

The press release - from the government's main legal Minister - makes it abundantly clear the provincial government is gearing up to sell cannabis to people it doesn't approve of due to the actions of the federal government.


In response to the federal government's plan to legalize cannabis by July 2018, Ontario is committing to a safe and sensible framework to govern the lawful use and retail of recreational cannabis as a carefully controlled substance within the province.

The mock press probably got this story right.