Waste Deep in the Nipigon

Wasting electricity is nothing new. I have a recurring earworm originating in a 1970's Ontario Hydro advertising campaign; "wasting electricity turns people off." In the decades since we are often reminded we use the wrong light bulb, the phone charger wrongly, water stupidly, and on and on. But today's waste includes actually curtailing emissions-free generation, without consumer savings, simply because there aren't consumers that can use the electricity. Much of that waste is avoiding generation from the public hydro-electric generation that gave the former  public utility the name "Ontario Hydro." Ontario Hydro is gone, but it's generators survive under Ontario Power Generation (OPG). I present OPG's generators on the Nipigon river as an example of the waste occurring in today's IESO administered electricity system.

The Nipigon river was in the news this winter as a new and unique, to the climate, cable-stayed bridge heaved, closing the TransCanada highway to all traffic for days, and requiring heaving loads to drive around Lake Superior for a much longer period. The bridge design was selected, at least in part, as it "eliminates the need for in-water structures in the Nipigon River."

15 kilometers (km) away, the Alexander Generating Station is an in-water structure that first started producing power in 1930. The current capacity is 69 megawatts (MW).

2 km upriver of that is the older Cameron Falls Generating Station, with a capacity of 92 MW.

17 km upriver of that is the newest, and largest of OPG's Nipigon River system generators, the 144 MW capacity Pine Portage Generating Station. A substantial reservoir exists behind Pine Portage:


Forgan Lake, south of Lake Nipigon, was created when Pine Portage was built. Forgan Lake was named by a decision of the Canadian Board of Geographic names on November 3, 1949. The lake comprises Hannah Lake and Creek, Eva Lake, Pine Point, Devil Rapids, Victoria Rapids, Emma Lake and others.

Conceptually, the same water provides electrical power 3 times, with it's journey through all three generators controlled at Pine Portage.

I've been tracking hourly generation reported by the IESO since September 2010.[1] To eliminate the typical monthly variations over the course of a year, I've graphed the moving 12-month total of each of OPG's 3 Nipigon River generators: 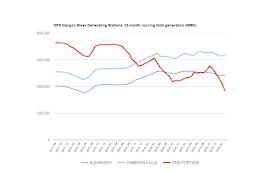 The decline of production at the Pine Portage generating station is obvious, and so dramatic in recent months I asked OPG on twitter if they, "would like to comment on reduced production at Pine Portage GS before I speculate." OPG responded, "Pine Portage GS is available to run if required. Suggest you contact @IESO_Tweets for demand information."

The Ontario Court of appeal recently upheld a ruling adding over half a billion dollars to Ontario's electricity bills.[1] The case involved a number of electricity generators contracted between 1989 and 1994 challenging a 2011 change in the method of calculating a benchmark to which payments are indexed. Officially the generators' challenge is against the Ontario Electricity Financial Corporation (OEFC). Functionally, it is ratepayers that were punished. How ratepayers came to be guilty is a legal matter, but the failure in court is a result of the failures of the province's recent governments.

The generators were contracted during periods of Liberal (David Peterson) and New Democratic Party (NDP) rule. Neither party was positive on the public electricity entity, Ontario Hydro, and its concentration on nuclear power. Ontario Hydro was forced by the governments to contract supply from "non-utility generators" - now simply called NUG's.

The court documents reveal a group of NUGs contracted with pricing indexed to "Direct Industrial Customers ...whose average monthly maximum demand was 5 MW or greater." An additional and pertinent specification in the indexed model is "a 100% load factor, meaning a constant and consistent energy demand for all 8760 hours of a year."[2]

The court's ruling, upheld on appeal, is that the NUGs getting paid based on,via indexing, a current industrial customer with monthly peak demand greater than 5 MW with, a 100% load factor, is unfair.

That's a suspect decision, but worse is the direction to revert to the previous methodology.