wasted on the traditional territory of the Mississaugas


We’re gathering on the traditional territory of the Mississaugas of the New Credit."

So begins speeches in Toronto by Toronto's Premier, Kathleen Wynne. [1]
___

In March, 2013, Ontario Power Generation (OPG) announced, "Ontario’s new Niagara Tunnel is producing more clean, renewable, low-cost electricity at the Sir Adam Beck generating complex." The project had seen delays and early budget overruns which pushed the project cost up to $1.5 billion. The payoff for the work was to be "about 1.6 billion kilowatt-hours." 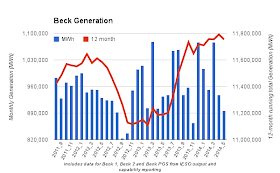 OPG announced the project complete and in service in March 2013. The growth in annual (12-month) production was ~600million kilowatt-hours, or 0.6 terawatt-hours (TWh). While this is less than 40% of the promised 1.6TWh, it is still presents far too favourable a picture of what happened after the tunnel entered service.

Importing electricity from Quebec is in the mainstream media again.
There are reasons the option appears attractive. Quebec has an abundant supply of hydroelectric power, so there is the appearance of an opportunity.  Additionally, the demand profiles of Quebec and Ontario could be considered complimentary: Quebec has a winter peak, and Ontario has had, in recent years, a summer peak.

The peaks aren't as complimentary as they sound. Ontario acually has a winter energy consumption peak too. The peak use of electricity is usually in the summer as the province heats mainly with natural gas in the winter. That is not the case in Quebec, where the winter energy peak is an electricity peak.

Ontario's first (and only public) Integrated Power System Plan (IPSP), released in 2007, noted an additional 1250MW of "Quebec Interconnection" as part of supply intended to meet the desired "Renewable Resources Goal." That interconnection has since entered service.  I have been tracking hourly intertie data back to April 2011; connecting that data with Ontario's top 25 winter, and summer, demand peaks shows that the flow of electricity between the provinces is exactly as logic dictates it should be.

Tomorrow, Ontario votes to elect its next government.

It's been an interesting campaign for me, particularly because of some thoughts on the province's electoral politics I worked through writing on the last election, in 2011, and an ongoing interest in the relationship of numbers and narratives.

My perception of provincial election campaigns are shaped by statistics on the share of possible votes (registered voters) achieved by parties. After 2011's election I began Lessons From Ontario's Record Low Election Turnout with:


One of Ontario’s 3 main political parties had a lower percentage of eligible voters opt for their party than had been the case since 1943.
That party won.


My premise has been that Ontario elections have been more about attracting voters, not moving the votes of voters from one candidate to another. This hasn't been true at the federal level, where the split in the Conservative movement returned successive majorities to the Liberal party, and it's not entirely true provincially, but the provincial conservatives should be able to win an election only by getting most of the people who vote Conservative federally to show up and do so provincially.