LTEP Backgrounder: The Con in Conservation

Ontario's government is currently presenting an appearance of consulting on another iteration of a long-term energy plan (LTEP).   Immediately after announcing they wanted input, they announced Ontario's New Energy Vision Puts Conservation First.
This post looks at the presentation of conservation in the first content pages of a document presented as authoritative "in support of the 2013's LTEP Consultation."

One of the resources the Ministry of Energy notes for the LTEP process is an Ontario Power Authority "Technical Presentation": Status, Outlook and Options for Electricity Service In Support of the 2013 LTEP Consultation

It's an interesting but flawed document.


In terms of costing out an electricity supply mix, slides 2 and 3 of the document present a generation capacity comparison between 2003 and 2013, and a comparable comparison of the energy produced in 2003 and the OPA's anticipated production in 2013.

Diving into the numbers one fascinating fact emerges - one which it's hard to imagine is a coincidence. Tallying up the generation and accounting for net exports (Exports - Imports), it turns out that the two years, a decade apart, are equal.

Nothing is NOT better than Junk Generation

Junk generation is a term I picked up from Tom Adams, but I'll attempt to define it: generation that exists to meet a proponent's need for revenue, not a consumer's need for power.


The past two days were the hottest of the year, with demand averaging 28% more than it has thus far into 2013.
Coal and natural gas collectively produced twice what they usually do
Nuclear 16% above its average
Hydro is right on it's average (being strongest during the sprint freshet)

Wind produced at 12.6% of it's average generation level

During the week she was away there were a couple of incidents one might have expected the Premier to be around to address:
In her return to the public stage, the unofficial scribe of the Liberal Party of Ontario tells us:

The costs of generating electricity from various technologies is always a contentious subject, but particularly so in Ontario, where 2009's Green Energy Act entrenched a feed-in tariff (FIT) regime specifically to grow the presence of variable Renewable Energy Sources (vRES) in Ontario's high-baseload electricity system. With the new nuclear build for Darlington also prominent in a supply picture being redrawn with a new long-term energy plan, it's an important time to define the value proposition, for the public, for Ontario's generation options.

A value proposition is not solely about costs, but it's important to address the cost factors more thoroughly than the standard levelized unit costs that historically have formed the basis to compare different supply options.

The 2011 EIA document provides a guide to establishing costs only if the columns containing the assumptions/parameters aren't ignored in jumping to the final column containing the levelized cost.

Firm price contracts for each unit of output, whether they are referenced as feed-in tariffs or strike prices, are easy to misinterpret as representing a levelized unit cost to a consumer, but they do not. A recent report from the Organization for Economic Co-Operation and Development and the Nuclear Energy Agency (OECD/NEA) [2] attempted to quantify "grid-level systems costs" for a variety of generation technologies in a number of countries:

In Ontario, such costs have been reported at over $60/MWh for industrial wind turbines. [3]
Scott Luft at 10:25 AM 1 comment:
Share

The Premier has directed the Ontario Power Authority (OPA) and the Independent Electricity System Operator (IESO) to "invite Ontarians to join the conversation and share their views about Ontario’s regional energy planning and siting processes."

This strikes me as pretending the distasteful electricity sector scandals have something to do with inadequate conversation between government professionals and whoever wishes to speak at them.

As much of Toronto suffered blackouts due to inclement weather last week (combined with a known lack of redundancy), the Minister of Energy issued a statement including:


Provincial energy agencies will conduct a review to determine how our energy infrastructure performed and how personnel responded. This process ensures that best practices are in place to learn from every outage, and to minimize future system issues. It's an opportunity to determine causes, learn what worked and ensure we can deliver the best service for families and businesses.

Perhaps some honest background would have been a helpful conversation starter.

CTV reports on one symptom of Ontario's surplus generation

CTV's Paul Bliss reported on the cost of curtailing generation at Bruce Power's nuclear units.  The report had some information not available elsewhere.


Bruce Power has turned five units off at different times this year to cut supply for a total down time of 40 days. Since the plant is paid about $1 million per day, it cost Ontario $40 million for reactors to idle.
Bruce also conducted steam diversions from turbines to cut power production 84 times this year, which is the equivalent of approximately 22 unit days offline. For that, the plant was paid $22 million to vent steam into the air instead of operating turbines.
In total, $62 million was paid to the Bruce plant this year to suppress electricity production.

The full article, and more comprehensive video report, are at CTV Toronto News

I think some context on the figures is important, both for understanding the role of the curtailments in the rapidly escalating prices Ontarians are, or soon will be, experiencing, and to understand while they'll be experiencing escalating escalations.

A couple of years ago, today, I posted a half-year review titled Ontario's Electricity System Halfway into 2011 ... here it is for 2013 with some crossouts, updated graphics, and some new commentary(bold italics)
I have not included the factor new to this year, which is the surge in high cost generation not reported by the system operator (IESO) or the system planner (OPA).  That will be left for another post, except to note generation, and demand figures for the first half of 2013 I estimate to be underreported by ~1.1TWh, roughly double the unreported amounts for 2011 which were double the amounts for 2009.
Other than that, the trends apparent 2 years ago continue, and the excessive rate hikes of the past couple of months are due to the government's consistent disinterest in competently managing supply.
___

Ontario's electricity sector experienced more of the same during the first half of the year - which continues to betray the ongoing mistakes of the government and the Ontario Power Authority (OPA). 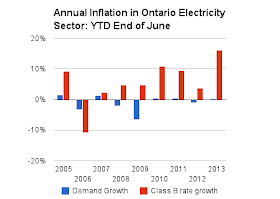 The headline figures for the first half the year, when June's numbers are finalized in a couple of weeks, should be anemic demand growth accompanied by inflation in pricing of almost exceeding 10%. But the same headlines should have been written one year years ago. Instead, Ontario's residents continue to be subjected to errant implications an insatiable appetite for ever more electricity is driving the price hikes.

Ontario's Jeopardy: The highest level of the civil service

"Over the past six or seven years, Ontario has beefed up its electricity exports and made $5-$6 billion selling excess electricity, says IESO President and CEO Bruce Campbell. "

There are lots of ways to estimate profits and losses on exports, but over "the past six of seven years" Ontario doesn't even have $5-$6 billion in revenues from exports. $4-$5 billion is a revenue range for all exports since 2006 began, but most imports (particularly in the most recent years) occur while we are exporting even more, so at the most rudimentary level one might say the net revenue from export/import activities has been $2-$2.5 billion in the past 6 or 7 years.[1]

One has to wonder if the ability to forget things is a quality that acquires position in Ontario's ruling culture.

What would this cost me?